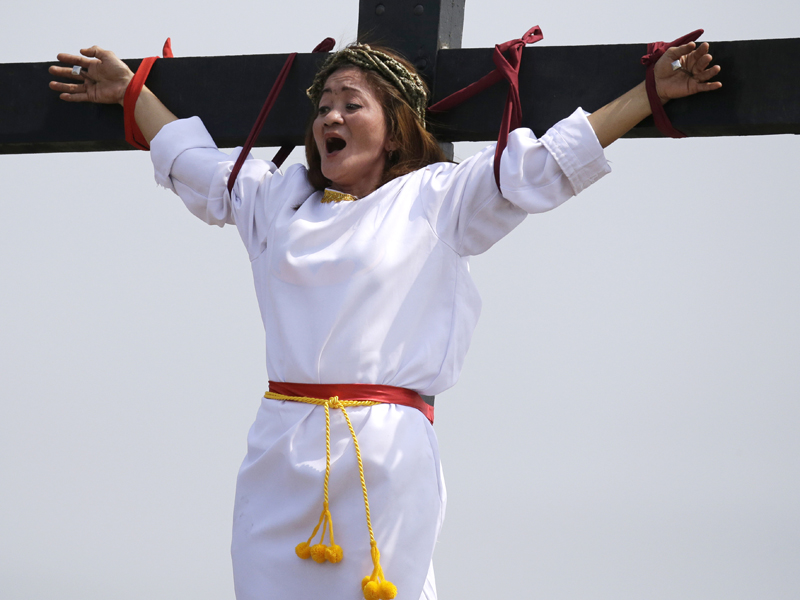 Maryjane Sazon, a 39-year-old beauty salon worker, grimaces as she gets nailed to the cross as part of Good Friday rituals in the village of San Pedro Cutud, Pampanga province, northern Philippines, on March 30, 2018. Sazon said she has joined the tradition for seven years in the hope of being cured of severe headache and nervous breakdown. Thousands of Filipino Roman Catholic devotees and tourists descended Friday on a farming village north of Manila to witness the crucifixion of several men in a re-enactment of Jesus Christ's sufferings, a gory annual tradition church leaders frown upon. (AP Photo/Aaron Favila)
March 30, 2018
Yonat Shimron

SAN PEDRO CUTUD, Philippines (AP) — Filipino Roman Catholic devotees, including a woman, were nailed to wooden crosses in a gory Good Friday re-enactment of Jesus Christ's sufferings that was watched by thousands of spectators but frowned upon by church leaders.

At least three of eight devotees wearing crowns of twigs were crucified by midafternoon by villagers north of Manila who were dressed as Roman centurions.

The spectacle in San Pedro Cutud village reflects a unique brand of Catholicism that merges church traditions with folk superstitions. Many of the mostly impoverished penitents undergo the ritual to atone for sins, pray for the sick or a better life, or give thanks for what they believe were God-given miracles.

The Lenten rituals are frowned upon by church leaders in the Philippines, Asia's largest Roman Catholic nation, especially if the event is used to boost tourism and business. The re-enactments of the crucifixion, however, have persisted and have become an awaited tourist attraction in the largely unknown village in Pampanga province, about 80 kilometers (50 miles) north of the capital.

While the crucifixions have become a summer tradition to locals, they still leave many foreign tourists bewildered.

"It's terrible," Luke Henkel from Florida said. "You wanna stop it."

Mayor Edwin Santiago of San Fernando, the city where San Pedro Cutud lies, said more than 400 police officers were deployed and first-aid stations set up to look after the huge crowds.

"We provide assistance because we can't stop the influx of tourists," Pangilinan said. "We don't promote it as a festival but it's rather a show of respect to a local tradition."
Villagers used the crowd-drawing events to peddle food, water, fans, umbrellas and souvenirs and rent out parking slots and toilets. A leading cellphone company provided tents for shade with its name embossed on them.

Archbishop Socrates Villegas said it's best for Catholics to mark Lent in prayers and acts of love and charity.

"Instead of spilling your blood on the streets, why not walk into a Red Cross office and donate blood? Choose to share life. Share your blood," Villegas said in remarks posted in a Catholic church website.

Friday's crucifixions would be the 32nd for Ruben Enaje, a 57-year-old sign painter who began his yearly rites after surviving a fall from a building. He plans to stop when he turns 60.

Maryjane Sazon, a 39-year-old beauty salon worker, said she had joined the re-enactments seven years ago in the hope of being cured of a severe headache and nervous breakdown. Her crucifixion Friday was dedicated to her sick sister.

Prior to the crucifixions, dozens of male penitents walked several kilometers (miles) through village streets, beating their bare backs with sharp bamboo sticks and pieces of wood. Some of them had their backs cut to keep them bloody.