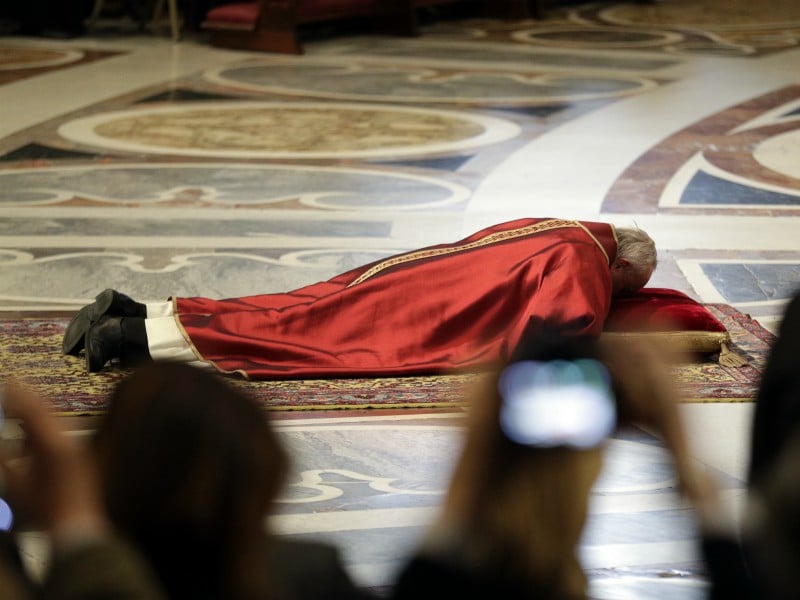 Pope Francis lies down in prayer during the Good Friday Passion of Christ Mass inside St. Peter's Basilica at the Vatican on March 30, 2018. (AP Photo/Andrew Medichini)
March 30, 2018
Nicole Winfield

ROME (AP) — Pope Francis presided over solemn Good Friday services amid heightened security at Rome's Colosseum for the Via Crucis procession and a new communications controversy at home over the existence of hell.

Wearing his white coat to guard against the nighttime chill, Francis listened intently along with some 20,000 faithful as the meditations re-enacting Christ's crucifixion were read out in the torch-lit Colosseum. At the end, he delivered a meditation of his own, denouncing those who seek power, money and conflict and praying the Catholic Church will always be an "arc of salvation, a source of certainty and truth."

This year, the prayers were composed by students in keeping with Francis' dedication of 2018 to addressing the hopes and concerns of young Catholics.

Italian police, carabinieri and soldiers were on alert, with Holy Week coinciding with a spate of arrests of suspected Islamic extremists around Italy and warnings from law enforcement about the return of foreign fighters from Iraq and Syria.

The Good Friday procession, the seminal event in Christianity leading to Christ's resurrection celebrated on Easter Sunday, also coincided with a new communications controversy in the Vatican over the pope's reported assertion that hell doesn't exist.

The Vatican hasn't denied Francis' comments to the La Repubblica newspaper at the height of Holy Week, saying only that Francis' quotes can't be considered a "faithful transcript" of what he said since the journalist reconstructed a conversation.

It was the fifth time in five years that Francis has spoken to Repubblica's founder, Eugenio Scalfari, a 93-year-old devout atheist who admits he doesn't record or take notes during interviews.

Nearly every time a Francis interview has appeared on Repubblica's front page, the Vatican press office has insisted the pope's words weren't necessarily accurate, without denying them outright or explaining what he meant. That has prompted questions about why the pope continues to speak to Scalfari and allow himself to be quoted.

Spokesman Greg Burke didn't respond Friday when asked whether the pope believes in the existence of hell or not. Francis has in the past spoke frequently about the devil and hell, in keeping with Catholic teaching.

The doubts, however, have enraged Catholic conservatives, who have lost their patience with a pope who seems to care less about doctrine than dialogue, especially with atheists and people of other faiths.

Leading Francis critic Antonio Socci said the pope's words "in one fell swoop wiped away all the dogma of immortality of the soul and hell. As if the church has been tricking us for 2,000 years and Christ had lied by instilling in us the fear of hell."