Elder Gerrit W. Gong and Elder Ulisses Soares take their seats on the stand after being sustained as the newest members of the Quorum of the Twelve Apostles during the Saturday morning solemn assembly in the Conference Center, March 31, 2018. ©2018 by Intellectual Reserve, Inc. All rights reserved.

(RNS) — Mormons made history at their 188th General Conference with their announcement of replacements for two recently deceased members of the Quorum of the Twelve Apostles.

One is a Brazilian, Ulisses Soares, 59, who has served since 2013 as a member of the Presidency of the Seventy — which is often a “feeding ground” for grooming future apostles. The São Paulo businessman is the church’s first-ever apostle from South America, and has previously served as a mission president in Portugal.

The other is Gerrit W. Gong, 64, also of the Presidency of the Seventy. Gong, who is originally from California, is the first apostle of Asian descent in the nearly 16-million member church. He is a former Rhodes Scholar and has served in a variety of positions in international relations.

Mormons around the world first learned of the change when members of the Quorum were asked to sustain new LDS president Russell M. Nelson on Saturday (March 31). Twitter was alight with excitement, as church members expressed surprise and delight that the Quorum would now feature more ethnic diversity than ever before.

While Gong was on many Mormons’ short lists as a possible choice for the Quorum (including RNS’s own entirely speculative post earlier this week about possible changes to watch for), Soares, who is younger, was more of a surprise. 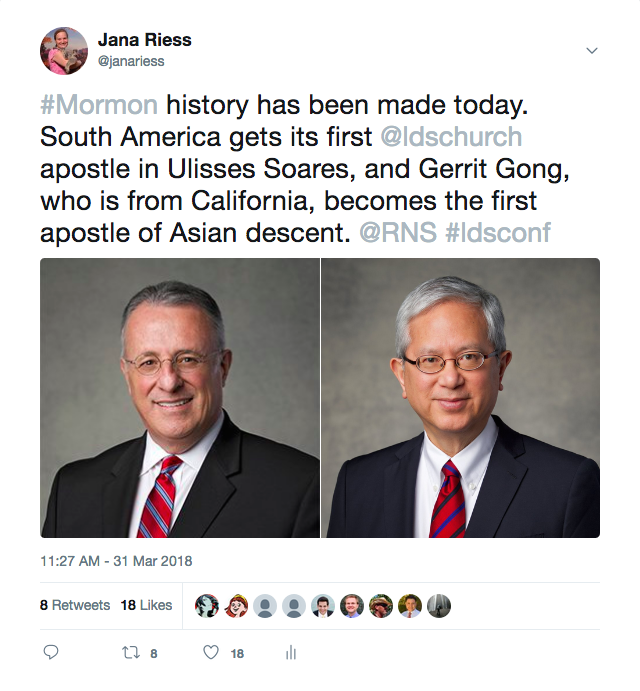 These changes took place amidst an opening session that focused heavily on the religion’s recent transition to new president Russell M. Nelson, who succeeded Thomas S. Monson who died in January.

From the opening hymn — “We Thank Thee, O God, for a Prophet” — to the closing remarks by Elder Neil L. Anderson, the event was a lovefest for President Nelson, and for the LDS belief in prophets.

“We embrace President Nelson as we would have embraced Peter or Moses in their day,” said Anderson, who explained the unique role the LDS prophet has in Mormons’ spiritual lives.

Members should follow the prophet’s instructions, Anderson said, noting that anything the prophet says would be better greeted with exclamation points than question marks by church members.

“If we choose to set his counsel aside and determine that we know better, our faith suffers and our eternal perspective is clouded.”

Yet the Saturday morning session speakers did not claim prophetic infallibility, and at least one called attention to the possibility of human frailty.

Elder M. Russell Ballard said Latter-day Saints should not be surprised that people called to serve in the Church are not perfect. “Given the reality of our human weaknesses and shortcomings, how do we move forward in supporting and sustaining each other?” he asked.

This question is on the minds of many this week, as the Church conducts its otherwise joyous conference under a bit of a cloud.

It has spent nearly two weeks dealing with allegations of sexual abuse by a former president of the Missionary Training Center, a story which became even more controversial on Friday night when Salt Lake City television station KUTV ran a story suggesting the LDS Church’s attorney may have provided documentation that contained sensitive information about the female accuser’s history to the accused’s son Greg Bishop, who then released it to the media.

Four more sessions are planned in this weekend’s Conference: an afternoon gathering for the entire membership today, a priesthood meeting for men and boys this evening, and two more sessions for all members tomorrow. It is widely expected that President Nelson will make some kind of major announcement at some point, though the content of this announcement is unknown.