BATON ROUGE, La. (RNS) — The week before Easter is the holiest week of the year in the Christian calendar. People across the country went to church last Friday (March 30) to reflect on the final words of an unarmed man of color who was hung on the cross and was killed in an act of state-sanctioned violence.

As we remembered Jesus’ final days, the decision to not file state charges in the death of Alton Sterling — shot down in Baton Rouge in an incident of state-sanctioned violence — was and is particularly heart-wrenching.

We find ourselves again asking, “How long O Lord?,” as horrific video clips of Sterling’s last moments become public. On the cross, Jesus spoke to God, saying, “Forgive them, for they do not know what they are doing.” As we strive to be more like Jesus, many in our day and age want to forgive those who deny justice, but find it hard because they do know what they are doing.

Too often police officers kill people of color first and ask questions later. Saheed Vassell and Stephon Clark are only the most recent names on a list that never seems to end: Terence Crutcher in Oklahoma, Philando Castile in Minnesota, Samuel DuBose in Ohio, Freddie Gray in Maryland, Walter L. Scott in South Carolina, Akai Gurley in New York, Laquan McDonald and Rekia Boyd in Illinois. And this isn’t even a complete accounting — though at least in most of these, charges were brought against the officers involved.

Sterling’s name, however, is also on another list, alongside Tamir Rice of Ohio, Michael Brown of Missouri and Eric Garner of New York — people of color whose families and communities never had the chance for justice. 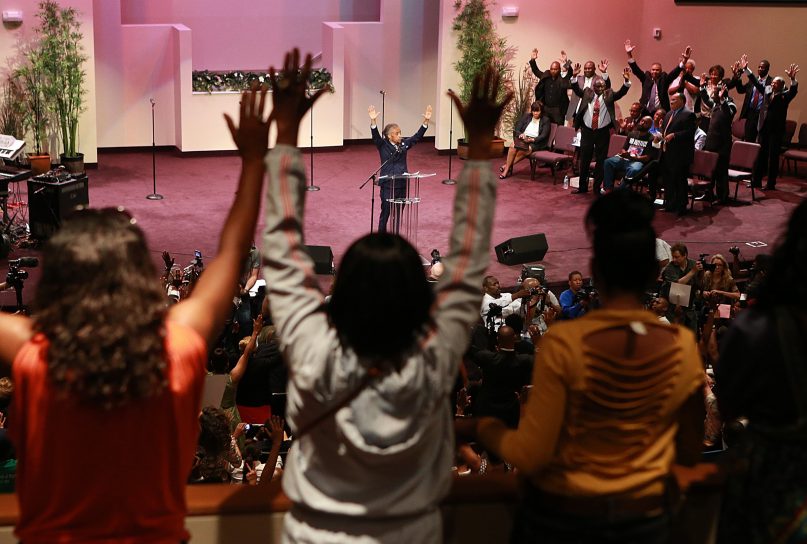 Activist and television show host the Rev. Al Sharpton speaks at Greater Grace Church in Florissant, Mo., on Aug. 17, 2014, during a rally for justice for Michael Brown. Photo by Christian Gooden/St. Louis Post-Dispatch

If we, as a society and as people of faith, don’t examine what is wrong with the current so-called justice system and strive to change it, this list will grow longer. If we don’t see Jesus in all people and honor them as the children of God that they are, more are condemned to die, especially as some would see more guns and police officers in schools under the guise of increased safety.

Structural and institutional racism dictate whether or not black people live to see another day when we encounter police officers. Bias and stereotype compound this problem.

Black men nationwide are still disproportionately killed by police compared to their white counterparts and men who belong to other racial and ethnic groups. So far this year, 294 people nationwide have been fatally shot by police officers, according to a Washington Post database launched in January 2015. Among the men and women shot by police so far in 2018 whose race is known, 124 were white, 60 were black and 38 were Latino.

Each name turned hashtag is a modern-day crucifixion, another painful reminder that the scales of justice seem permanently tilted away from black and brown people in the United States.

Yet, our faith reminds us amid our darkest days that Resurrection Sunday is coming. Alton Sterling will not rise, but perhaps the courage and the power of the people will rise as they are rising in Baton Rouge, where people have staged daily lunchtime sit-ins in the office of Louisiana Attorney General Jeff Landry to demand a special prosecutor.

Perhaps we’ll witness the rise of people exercising their power to elect leaders who will represent the interests of everyone, not just the police, and who push for legislation like the recently introduced bill in Louisiana to require grand juries in all police-involved shootings and homicides. I pray the people’s power grows so strong that when they demand justice from the state they receive it, and that when the police make a mistake, they repent — or, better yet, they do not make the mistake in the first place.

This year, may all of us — including police officers — be more like the unnamed Roman soldier who looked at what had been done and cried out to repent. May we turn away from modern-day crucifixion and state-sponsored violence and walk instead toward justice.

(The Rev. Jennifer Jones is a minister of social justice for Shiloh Missionary Baptist Church in Baton Rouge. The views expressed in this commentary do not necessarily reflect those of Religion News Service.)