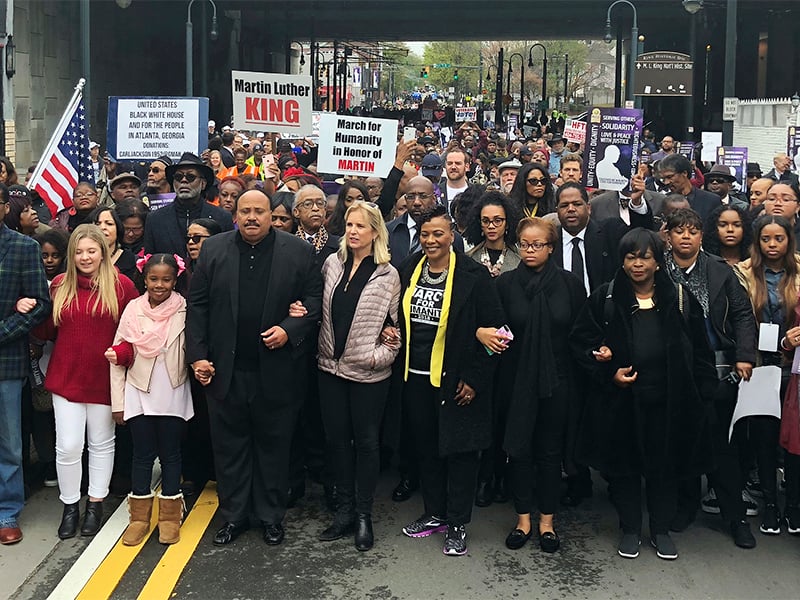 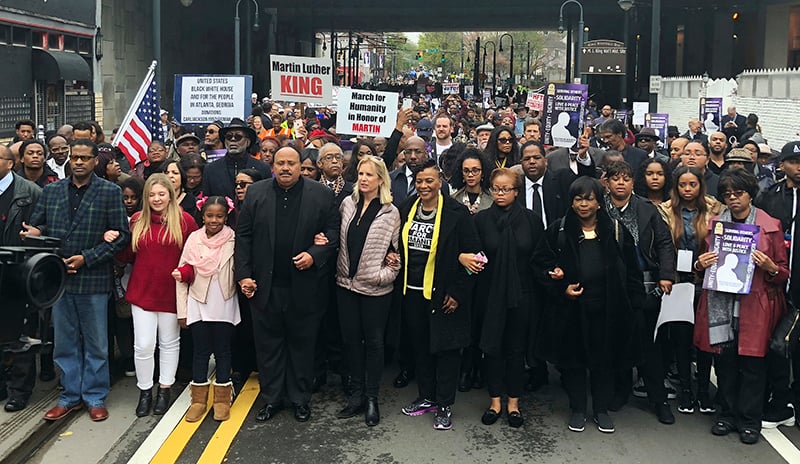 Martin Luther King III, fourth from left, leads the March for Humanity on April 9, 2018, in Atlanta. The march commemorates the funeral procession of the Rev. Martin Luther King Jr. 50 years ago. To the right of King is Kerry Kennedy, daughter of Robert Kennedy, and Bernice King, daughter of Dr. King. To the left is his daughter Yolanda Renee King and Jaclyn Corin, an organizer of March for Our Lives. Behind King is the Rev. Al Sharpton. (AP Photo/Jonathan Landrum)

ATLANTA (AP) — Relatives of the Rev. Martin Luther King Jr. led more than 1,000 people on a march Monday in downtown Atlanta, where large crowds gathered 50 years earlier for the slain civil rights leader's funeral procession as a mule-drawn wagon pulled his casket through the streets.

On Monday, people sang the spiritual "This Little Light of Mine" and waved signs with slogans such as "Nobody's Free Until Everybody's Free" as the march left Ebenezer Baptist Church, where King once preached. Two of King's children, the Rev. Bernice King and Martin Luther King III, locked arms as they walked at the front of the march.

King's granddaughter, Yolanda Renee King, and the Rev. Al Sharpton also took part in the march covering just over 1 mile to the grounds of the Georgia state Capitol.

The march followed an invitation-only church service at Ebenezer, including prominent friends and admirers such as King confidant Andrew Young and comedian Chris Tucker.

Young, former U.S. ambassador to the United Nations and a former Atlanta mayor, said he still has not been able to accept King's death five decades after his assassination April 4, 1968, in Memphis, Tenn.

"He gave his life unlike I was able to," Young said.

"I don't know about in your heart, but in my heart Martin Luther King is very much alive. In my mind he's very much alive," Young said. "In spite of all the problems we have, (he) continues to reign among us, calling on us to do better and be the best that we can be."

During the service, Yolanda King introduced a survivor of the deadly February school shooting in Parkland, Fla., which turned high school students into activists demanding action against gun violence in the U.S.

"There's injustices on our streets," said Jaclyn Corin, a student at Marjory Stoneman Douglas High School, where 17 people were killed. "Young people have changed things in the past and we're going to do it again."

The events Monday in Atlanta followed a host of tributes honoring the slain civil rights leader last week. Cities across the U.S. marked the 50th anniversary of King's death.

King was shot on a balcony at the Lorraine Motel while visiting Memphis for a sanitation workers' strike. James Earl Ray pleaded guilty to the killing and quickly recanted, claiming he was set up. The conviction stood, and Ray died in prison in 1998.

Five days after King was shot, two funeral services were held in Atlanta on April 9, 1968. After a private funeral at Ebenezer, King's casket was loaded into a wagon pulled by two mules for a 40-mile procession through downtown Atlanta.

Thousands lined the streets to view the casket on its trip to Morehouse College, where a public service was held at King's alma mater.

At the church service Monday, Mary Gurley took the podium to reprise the mournful hymn she sang during King's funeral five decades earlier.

"This is for you, M.L.," she said before a solo performance of "My Heavenly Father," which she sang as a young choir member during King's 1968 funeral. "This was our theme song."

Related Posts
By Alejandra Molina
Months into COVID-19, funeral directors and clergy continue to innovate death care
By Malcolm Foster
Young Japan priests try to breathe life into fading Buddhism
By RNS staff
From civil rights to no nukes: A look at historic protest photos
By Nomaan Merchant, Juan Lozano, Adam Geller
'He is going to change the world': Funeral held for Floyd
By Thomas Reese
My generation failed to deal with racism