The teapot of American punditry enjoyed a bit of tempest last week when Kevin Williamson, the conservative writer hired by the Atlantic, was quickly fired after Media Matters revealed that he supports hanging women who have abortions.

Editor Jeffrey Goldberg explained that his decision to let Williamson go had to do with the Atlantic’s “tradition of respectful, well-reasoned debate, and to the values of our workplace,” rather than the writer’s “views on abortion.” Really?

Love him or hate him, Williamson has always been about provocation, not civil discourse. As for his views on abortion, these consist in the following syllogism:

Along with the corollary that, in Williamson’s opinion, hanging is preferable to “antiseptic” lethal injection.

You can’t say that this position is poorly reasoned. It is, however, beyond the pale in our public abortion debate. Indeed, the very idea of imposing criminal sanctions on women who get abortions is beyond the pale.

During the last presidential campaign, you’ll recall, Donald Trump said that, yes, “there has to be some form of punishment for the woman.” Immediately, mainstream pro-life organizations threw a fit.

“No pro-lifer would ever want to punish a woman who has chosen abortion,” said Jeanne Mancini, president of the March for Life Education and Defense Fund. “This is against the very nature of what we are about.” And there was this from National Right to Life: 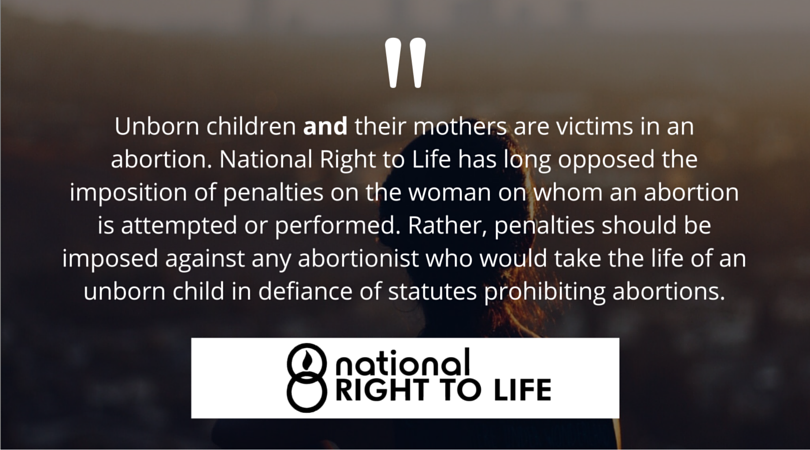 And so Trump, the born-again pro-lifer, did a U-Turn, releasing a statement saying that “the doctor or any other person performing this illegal act upon a woman would be held legally responsible, not the woman.”

So no one should be surprised that the right-to-life community did not leap to Williamson’s defense.

There are really two possibilities here. One is that pro-life advocates are just pretending to be against sanctioning women who get abortions, imagining that a time will come when, public opinion having changed, the woman will be held legally responsible. That’s the view of some on the left.

It would be along the lines of the fourth-century Christians who supported religious tolerance for all until they were powerful enough to bring the hammer down on all non-Christian religions.

The alternative is to take the mainstream pro-lifers at their word, which is to say that the only people who should ever face criminal sanctions for the taking of unborn life would be abortionists and perhaps, in the case of medicinal abortions (now running at one-third of the total in the U.S.), the purveyors of the abortifacient drugs.

Which would be along the lines of charging gun manufacturers with murder when someone uses one of their products to kill someone.

I can see how, from the pro-life standpoint, some women might be absolved of personal responsibility for having an abortion. A petrified, impoverished teenaged girl, for example. But a well-to-do married woman who chooses to abort rather than have a child with Down Syndrome?

If pro-life advocates are indeed sincere about not holding the woman legally responsible, then they ought to stop calling abortion murder. Because their actual position is that, for women, it’s permissible homicide.

For those of us in the pro-choice community, it is, of course, permissible period.