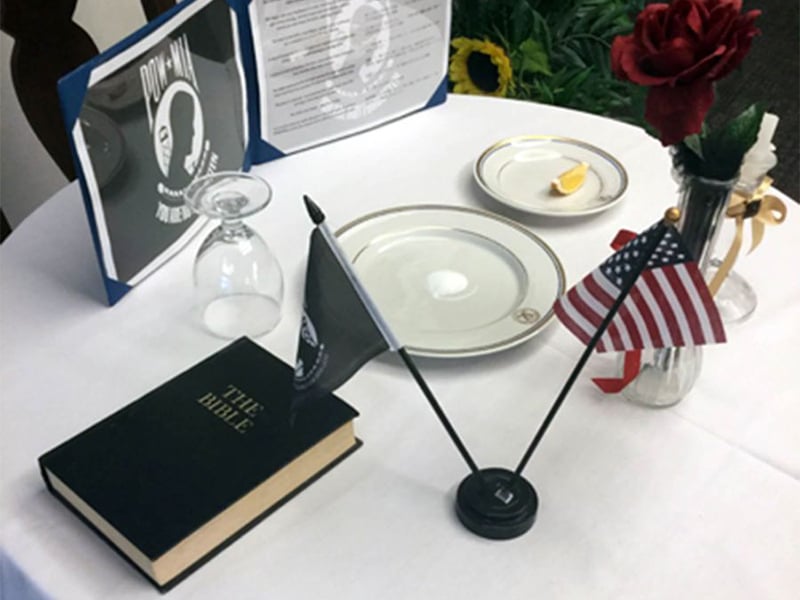 This Bible in a POW/MIA display at U.S. Naval Hospital Okinawa was the impetus for the Military Religious Freedom Foundation’s complaint with the Navy. Photo courtesy of MRFF
April 26, 2018
Lauren Markoe

(RNS) — The usual adversaries are at it again in the ongoing war over the place of the Bible and Christian faith in the U.S. armed forces. On behalf of 26 military families, the Military Religious Freedom Foundation is battling with the Navy over a POW/MIA display at the naval hospital on Okinawa, Japan.

At issue: the placement of the Bible alongside the POW/MIA and American flags with a placard that says: “The Bible represents the strength gained through faith to sustain those lost from our country, founded one nation under God.” Since the Okinawa news hit the media, the MRFF says it has received complaints from 31 other U.S. military installations that have the Bible included in their "missing man" displays.

Do the Bible and faith statement in the POW/MIA displays violate the constitutional prohibition against the government promoting a religion? Or are they a harmless nod to the fortitude and comfort many soldiers derive from their country’s majority religion?

You can argue it either way — and believe me, those caught up in this drama are doing just that. But for those intent on maintaining the Bible’s prominence in American culture, the POW/MIA displays are more symbolism and sideshow than anything of substance. There’s a much bigger problem in civilian life and Americans' homes that ought to concern them:

The fact that even though "the Good Book" is ubiquitous, with the median American home containing three copies, it is seldom read, poorly understood and, to put it charitably, inconsistently followed.

It’s fitting that the Bibles on the POW/MIA tables are closed, used as symbols or sacred objects rather than a book meant to be read for truth, wisdom and inspiration. Because closed is how the Bibles in Americans’ homes generally remain.

“Americans Are Fond of the Bible, Don’t Actually Read It.” So says a news release issued by the evangelical polling organization LifeWay Research a year ago. LifeWay finds that Americans generally have a positive view of the Bible and see it as a source of moral lessons still relevant today. But more than half admit they have spent little or no time reading it, and only 1 in 5 has read the whole book.

Our low level of Bible reading explains why Americans tend to be frightfully ignorant about the text at the center of the religion that more than two-thirds of the population claim to follow. As evangelical leader Albert Mohler notes with alarm, polling finds fewer than half of Americans can name the four gospels, and 60 percent are unable to name even five of the Ten Commandments.

Our rampant biblical illiteracy also helps explain why those most passionate about pushing the Bible in settings of dubious appropriateness (like a Navy hospital in Japan) often press their case in deeply unbiblical ways.

Mikey Weinstein, president of the group that filed the Okinawa complaint, showed me some of the correspondence he has received. Let’s just say that the writers of this vile and unprintable material demonstrate the opposite of the Jesus-style “love your enemy” teaching found between the covers of the Bible.

Like the religion of which it is part, the Bible plays a contested and complex role in American culture. Is it a symbol of national or “tribal” identity — something to be aggressively asserted in an ongoing struggle between cultures on our soil and abroad?

If yes, best to leave the Bible closed. It’s easier to thump it that way.

But if, like me, you’re convinced that the Bible actually has something valuable to say all these centuries after its composition, it’s better to have it in the open position at least occasionally — and to read what’s on its pages.

You’ll find it full of poetry, moral instruction, and stories and metaphors that help us make sense of our daily struggles. You’ll find the penetrating insights of Jesus, which remain powerfully applicable whatever our beliefs about his divine status.

“The Invisible Bestseller” — this is the apt title that religion journalist Kenneth Briggs used for his 2016 book on the fading prominence of the Bible in American life. The Bible, he finds, is in the curious position of being both “everywhere and nowhere,” frequently found in public settings and everyday households but disturbingly absent from Americans’ heads and hearts.

If you’re bothered by the fading role of the Bible, one response is to wax indignant, blame “political correctness” and push the Bible harder. This was the move made by Hiram Sasser, general counsel for the group First Liberty Institute, when he was on the Todd Starnes radio show discussing the controversy about the Bible in the POW/MIA display on Okinawa.

“(Can) you imagine if President Trump found out about this, that someone was complaining about a Bible being on a table?” Sasser said. “He’d probably put two on the table.”

He probably would. Neither would be open.

(Tom Krattenmaker writes on religion in public life and directs communications at Yale Divinity School. His latest book is “Confessions of a Secular Jesus Follower.” The views expressed in this commentary do not necessarily reflect those of Religion News Service.)