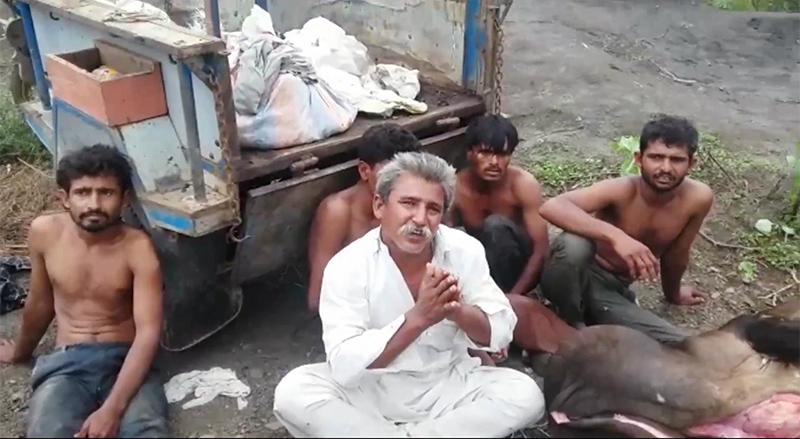 Balubhai Sarvaiya, center, pleads with far-right Hindu vigilantes (not pictured), who accused his sons and nephew of slaughtering a cow they were skinning for disposal on July 18, 2016, in Una, Gujarat state, India, in this video screenshot. Later in the video, which was widely disseminated, the vigilante cow protectors beat Balubhai’s three sons and nephew as they were tied to the tailgate of an SUV. The family members are Dalits, the modern name for the Hindu castes once known as untouchable. On April 29, 2018, the family members and many others converted to Buddhism in protest, claiming that the authorities have yet to take action against the men who attacked them. Video screenshot

NEW DELHI, India (RNS) — Four survivors of a brutal 2016 beating at the hands of India’s so-called cow protectors converted to Buddhism this week in a high-profile ceremony recalling one of the country’s most beloved heroes and underscoring the grievances of those belonging to India’s lowest castes.

But they were not alone. As many as 300 other people also renounced Hinduism on Sunday (April 29) near Una, Gujarat – the home state of Prime Minister Narendra Modi, whose Hindu nationalist Bharatiya Janata Party reveres cows as sacred.

“The government has not given justice to us,” said Rameshbhai Balubhai Sarvaiya, 25, one of four young men who were allegedly tied to the back of an SUV and flogged by “Gau Rakshaks,” or “cow protectors,” in Una nearly two years ago after they were found skinning a dead cow.

Many in Hindu-majority India consider it an abomination to kill a cow, and their slaughter is banned in several Indian states.

Portrait of a young Bhimrao Ramji Ambedkar, architect of the Indian Constitution and founding father of modern India. Image courtesy of Creative Commons

Following in the footsteps of B.R. Ambedkar — the father of India’s Constitution who sparked a wave of conversions in 1956 when he abandoned a Hindu faith that classified him as spiritually impure and “untouchable” — the converts in Gujarat embraced Buddhism to protest the treatment of people who live on the lowest rungs of society.

Though it is illegal in India to discriminate on the basis of caste, the nearly 3,000-year-old social stratification system — while not as determinant in the life of many Indians as it used to be — still holds sway.

News of the beating of Sarvaiya — and his two brothers and cousin who were also attacked — sparked outrage across India after a video of the beating went viral in 2016.

Sarvaiya and the other victims say they are renouncing Hinduism in protest because, two years later, the culprits have yet to be punished, and untouchables — also known as Dalits — feel the party in power has done little to acknowledge their plight.

“The accused are still out on bail,” said Sarvaiya. “In addition, the government has not kept its promise to give us jobs and land of our own.”

Local police and government representatives declined to comment on the case, which has deep political resonances. Amid Modi’s efforts to win the loyalty of Dalit voters ahead of national elections in 2019, hundreds of thousands of Dalits took to the streets on April 2 to protest a Supreme Court order they perceived as weakening a 1989 law intended to protect Dalits, who comprise about 20 percent of the population. At least nine people  from lower castes were killed in clashes with police at the rallies.

On Monday, when further rallies took place, Amnesty International called on the Indian government to prevent the implementation of the Supreme Court ruling. Crime statistics show a steady decrease in rates of conviction and completion of trials in cases where Dalits are victims in recent years, the rights advocate said. While the conviction rate under the atrocities law is 15 percent, it is 47 percent for all crimes under the Indian Penal Code. 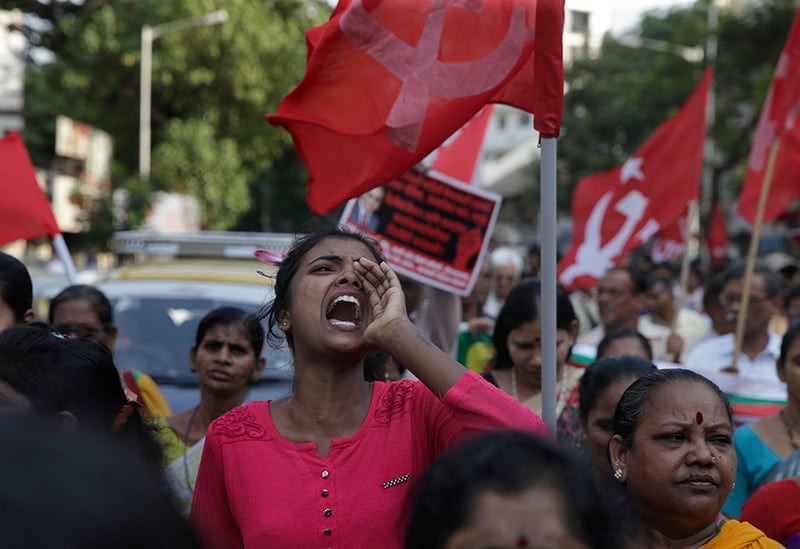 Members of Dalit organizations protest in Mumbai, India, on April 2, 2018. Violence erupted in several parts of north and central India as thousands of Dalits, members of Hinduism’s lowest caste, protest an order from the country’s top court that they say dilutes legal safeguards put in place for their marginalized community. (AP Photo/Rafiq Maqbool)

Though many Hindus consider cows sacred, the disposal of cow carcasses, tanning of leather and other jobs involving the remains of the animal are considered to be spiritually polluting and are performed chiefly by Muslims and Dalits, which means “oppressed” in Hindi.

Nationwide, some 124 people have been injured in cow-related attacks similar to the Una beating in recent years — almost all of them since Modi’s Hindu nationalist BJP took power in May 2014, according to an analysis by Indiaspend.com. More broadly, crimes against Dalits have increased by two-thirds over the past decade, according to police statistics.

The number of Dalits converting to Buddhism has spiked in Gujarat since Sarvaiya’s beating went viral, P.G. Jyotikar, chairman of the Buddhist Society of India, told the Indian Express newspaper. Many others Dalits have converted to Christianity or Islam — sometimes using the threat of conversion to extort concessions from government authorities — despite the enactment of anti-conversion laws in eight of the country’s 29 states. 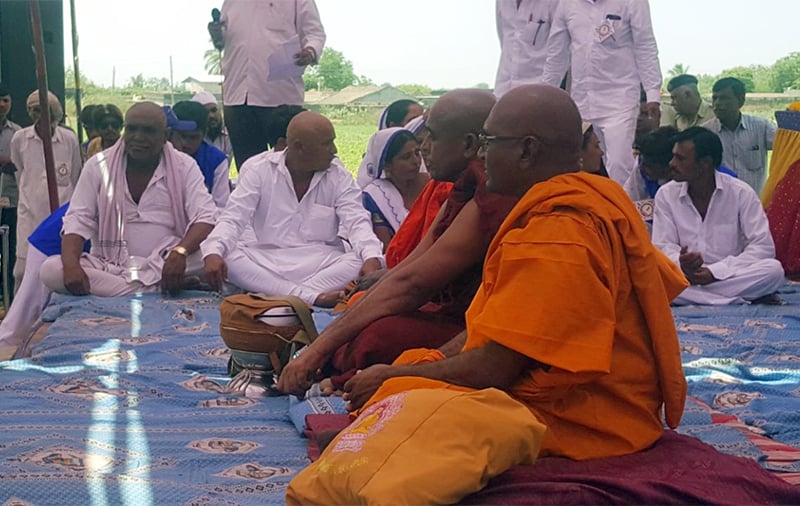 Four men who were tied to a car and beaten by far-right Hindu vigilante cow protectors in 2016 converted to Buddhism on April 29, 2018, in Mota Samadhiya, Gujarat state, India, along with some 300 other members of castes once considered untouchable. Photo by Dilip Mori

Thanks to Dalits’ appreciation of Ambedkar, Buddhism is the most likely destination faith when they decide to leave Hinduism, according to scholar Shiv Shankar Das, a former researcher at Jawaharlal Nehru University who has studied the neo-Buddhist movement.

“It is continuously increasing all over India, but right now we don’t have a leader who can convert people in large masses the way Ambedkar was able to do,” said Das.

Religious conversions are problematic for Modi’s BJP both ideologically and politically, according to analysts who note that the party’s core support base has traditionally comprised upper-caste Hindus.

Ideologically, the party’s central tenet of Hindutva, or “Hindu-ness,” aspires to the forging of a Hindu state. Politically, its electoral strategy has historically hinged on consolidating the Hindu vote, often demonizing religious minorities to overcome caste divisions within Hinduism.

An alleged vigilante cow protector thrashes four men informally accused of slaughtering a cow on July 18, 2016, in Una, Gujarat state, India. The beaten family converted to Buddhism in protest on April 29, 2018, along with many other Dalits, or untouchables. Video screenshot

As the Una beating and similar incidents seem to show, however, the cow-protection drive has heightened caste divisions, along with increasing Hindu-Muslim animosity. Now Modi, along with politicians of other stripes, has attempted to recast Ambedkar as a BJP icon and called on his party’s representatives in the Parliament and various state assemblies to spend at least one night in a village where Dalits make up at least half the population.

Pradip Parmar, a BJP member of the Gujarat state assembly, was the only one of 13 Dalit assemblymen from various parties to attend Sunday’s conversion ceremony, the Indian Express reported.

Claiming Hindu nationalist admiration for Ambedkar is problematic, however, said Harish Suchdeve, a retired banker and Buddhist convert who is now active in the conversion movement. Distinct from Tibetan or Shinto Buddhism and other sects, Ambedkarite or Navayana Buddhism is an explicit denouncement of the Hindu faith and caste system.

“They want to appropriate his name only, not his ideology,” Suchdeve told the Express, referring to Ambedkar’s famous essay, “Why I Am Not a Hindu.”

“Everything Ambedkar wanted to establish is opposite to what Hindutva wants.”