(RNS) — On Monday (May 14), the Trump administration unveiled its new Jerusalem embassy. Many American evangelicals cheered because they understood the United States’ recognition of Jerusalem as the “once and eternal” capital of Israel as a fulfillment of biblical prophecy.

Trump chose two evangelical ministers to offer prayers at the dedication of the embassy. Robert Jeffress, pastor of the First Baptist Church of Dallas, delivered the invocation. John Hagee, pastor of Cornerstone Church in San Antonio, gave the benediction.

Both clergymen adhere to dispensationalism, a theology informed by a literal reading of biblical prophecy. Most Americans have never heard the term “dispensationalism,” but they might have been exposed to this view of history through the popular “Left Behind” novels published in the 1990s and 2000s by Christian authors Jerry Jenkins and Tim LaHaye.

Dispensationalists believe Israel will play an important role in end-times prophecy. They teach that the return of the Jews to their homeland will be a sign that the end of the world is near. In most dispensationalist schemes, Jesus Christ will one day descend from heaven to the Mount Olives in Jerusalem, lead an army that will defeat the forces of the Antichrist at the Battle of Armageddon and establish a 1,000-year reign on the earth. 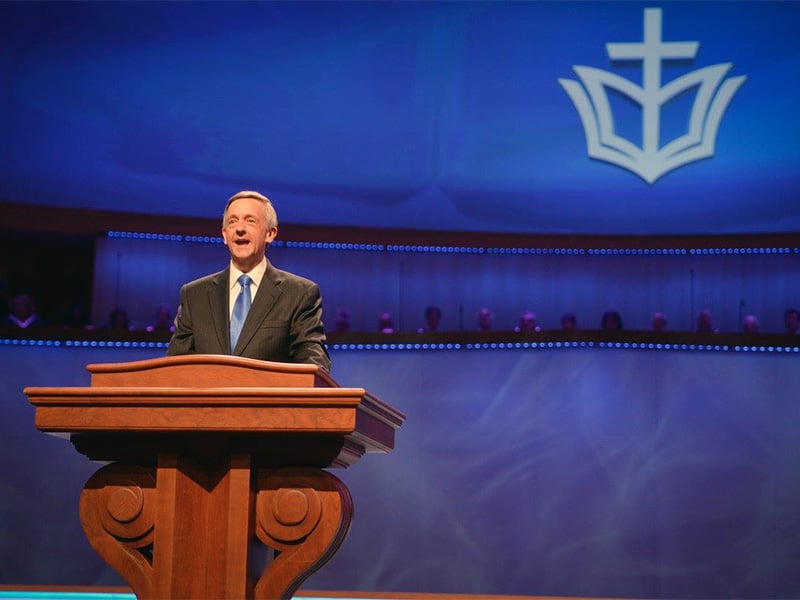 Robert Jeffress studied at Dallas Theological Seminary, the most important bastion of 20th-century dispensationalist thought. In 1970, author Hal Lindsey, a graduate of the seminary, brought dispensationalism into the American mainstream with the publication of his best-selling “The Late Great Planet Earth.” Jeffress has written his own books on biblical prophecy informed by this view of the Bible.

In 2006, Hagee formed Christians United for Israel, an organization of evangelicals committed to defending dispensationalist views of Israel’s place in biblical prophecy.

Both Jeffress and Hagee are also supporters of the idea that America was founded as, and continues to be, a Christian nation. They believe that the United States plays a special role in God’s plan for the ages.

The fact that the most powerful nation in the world has used its influence to restore Jerusalem to its rightful place in history provides dispensationalists like Jeffress and Hagee with clear evidence that America is on the side of the angels. Jeffress likes to quote God’s call of Abraham in Genesis 12: “Go from your country, your people and your father’s household to the land I will show you. I will make you into a great nation, and I will bless you. … I will bless those who bless you, and whoever curses you I will curse.”

For some of these dispensationalist evangelicals, Donald Trump, as the leader of a nation who has “blessed” Israel, is God’s man for such a time as this. Trump not only has the right policies on abortion and religious liberty, but he may even be a new King Cyrus.

This is a depiction of the biblical character Emperor Cyrus the Great of Persia, by Jean Fouquet, created circa 1470. Image courtesy of Creative Commons

In the Old Testament, Cyrus was the Persian king who released the Israelites from captivity and allowed them to return to Israel, the promised land where they rebuilt the walls of the city and the Jewish temple. Several evangelical leaders who have compared Trump to King Cyrus see the president as the politician who released American Christians from the captivity of what they perceive to be the anti-evangelical Obama administration. In a sermon on the morning of the 2017 presidential inauguration, Jeffress even praised Trump as a great builder of walls.

But other have applied the King Cyrus metaphor to Trump’s Israel policy. For example, Mike Evans, the founder of the Friends of Zion Heritage Center in Jerusalem and a staunch Trump supporter, was ecstatic last December when he learned about Trump’s decision to move the embassy to Jerusalem. Evans told the Christian Broadcasting Network that when he next saw Trump in the Oval Office he would say to him: “Cyrus, you’re Cyrus. Because you have done something historic and prophetic.”

Because of Trump’s actions, dispensationalists believe the blessing of God will come upon America. The Jerusalem decision reinforces the idea that America is a Christian nation. This decision makes America great in the eyes of God. It also makes Trump great in the eyes of those American evangelicals who visit the White House regularly to consult with the president, the flatterers and sycophants whom I have called the “court evangelicals.”

Jeffress, Evans and other court evangelicals claim that they were influential in Trump’s decision to move the Israel embassy. If this is true, we can say with certainty that United States policy in the Middle East is now heavily influenced by dispensational theology.

(John Fea teaches American history at Messiah College in Mechanicsburg, Pa. He is the author of the forthcoming “Believe Me: The Evangelical Road to Donald Trump.”  The views expressed in this commentary do not necessarily reflect those of Religion News Service.)

Editor’s note: an earlier version of this piece mischaracterized comments John Hagee made regarding the Holocaust. The sentence has been removed.