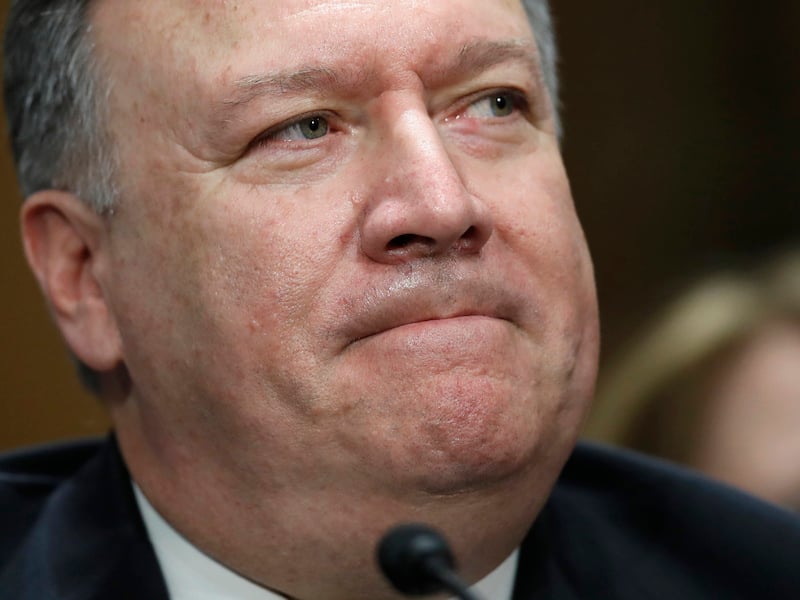 CIA Director Mike Pompeo, nominated to be the next secretary of state, pauses while speaking during his Senate Foreign Relations Committee confirmation hearing on April 12, 2018, on Capitol Hill in Washington. Pompeo's remarks were the first chance for lawmakers and the public to hear directly from the former Kansas congressman about his approach to diplomacy and the role of the State Department, should he be confirmed to lead it. (AP Photo/Alex Brandon)
May 17, 2018
Adelle M. Banks

WASHINGTON (RNS) — An interfaith group of more than 1,100 leaders is urging Secretary of State Mike Pompeo to appoint a new U.S. envoy to fight anti-Semitism after the post has been vacant for more than a year.

“Mr. Secretary, anti-Semitism starts with Jews, but doesn't end there: when any minority is threatened, everyone is less safe,” the signatories told Pompeo in a letter coordinated by the American Jewish Committee and released Wednesday (May 16).

“The world looks to America for leadership on this as on so many other matters. America can and must lead, beginning with the appointment of the next Special Envoy.”

The faith leaders said the position, empty since January 2017, should be filled to oppose the physical harassment of Jews and new campaigns to distort the history of the Holocaust.

“Around the world, violent and even lethal attacks have been made on Jews and Jewish institutions,” they wrote. “In far left and far right political parties in Europe and elsewhere, anti-Jewish rhetoric is on the rise as is the demonization of Israel and intimidation of its supporters.”

Congress mandated the envoy position in 2004. Last year, the State Department said it would retain the post, which some Jewish groups worried might be eliminated.

RELATED: State Department to keep anti-Semitism envoy but scrap many others

“We are gratified that our friends from Christian, Muslim and other faith communities have joined this appeal to Secretary Pompeo and that they too recognize both the threat of anti-Semitism and the need for U.S. leadership in mobilizing concrete actions to combat this cancer,” said Daniel Elbaum, the AJC’s chief advocacy officer.

Among the signers are Bishop Joseph C. Bambera, chairman of the U.S. Conference of Catholic Bishops’ Committee on Ecumenical and Interreligious Affairs; the Rev. Gabriel Salguero, president of the National Latino Evangelical Coalition; Imam Faizul Khan of the Islamic Society of the Washington Area; and John Taylor, director of interfaith relations of the Church of Jesus Christ of Latter-day Saints.

Other signatories included representatives of the Baha’i, Buddhist, Hindu and Sikh faiths.