LOS ANGELES — Eight years ago, Amanda MacLean enrolled for a singing course at Santiago Canyon College, a community college where she worked in Orange, Calif. All students were required to sing together as a choir. She was surprised when she found that the mandatory sessions not only included hymns but performances at religious events.

After singing at the City of Orange’s Christmas tree lighting three years in a row, she couldn’t stand it anymore. She went online to find herself an atheist choir.

“I knew there had to be nonbelievers out there who felt like I did, who had no place to sing without being forced to sing about Jesus,” said MacLean, now 40 and an administrative assistant at the J. Paul Getty Museum here. “I actually thought atheist choirs were a thing.”

They were and they weren’t. MacLean’s search led her to Bobbie Kirkhart, whose home near Dodger Stadium in Angelino Heights is familiarly known as Heretic House. In 2001, Kirkhart had co-founded the Voices of Reason with a fellow nonbeliever named Michael Jordan. Three years later, after Jordan’s death, Voices of Reason had disbanded.

With the help of Yari Schutzer, a 45-year-old IT consultant for Apple and an original member of Voices of Reason, MacLean rounded up a new batch of songful skeptics.

Voices of Reason is now, as it was in the beginning, the only atheist choir in the United States, its members say, and one of only a very few in the world.

The group performs at atheist events, science presentations, Unitarian Universalist churches, public libraries, and they are hoping to expand into nursing homes and schools in the future.

James Underdown, executive director of the Center for Inquiry-Los Angeles, where Voices of Reason has performed several times, said the choir is a natural philosophic fit for their organization, whose mission is “to foster a secular society.”

“There’s a lot of music out there that celebrates religious beliefs,” Underdown said, adding that people in his community “appreciate hearing something that lands in their perspective every once in a while.”

Plus, he said, the choir is talented.

At a recent rehearsal, a dozen people gathered around a piano, reading sheet music and warming up their voices before launching into song, an update on Janis Joplin’s “Mercedes Benz”: “Oh Lord, won’t you buy me an Apple TV,” the choir sang. “My friends all have iPads and I want one for free.”

After a while they turned their attention to mastering a few new songs. “You all know where you’re messing up so I don’t have to tell you,” said music director Katie Sharp, to laughter. The singers broke up into small groups to work on specific sections.

When they all return, the group sounds more cohesive.

Talent and secular music are common to many singing groups that call themselves choruses or glee clubs, and even Whiffenpoofs. What makes Voices of Reason a choir, and particularly an atheist one?

Voices of Reason members say they don’t simply avoid religious references. They draw attention to their rejection of religion, often picking songs that comment on its shortcomings. They have been in touch with members of Britain’s London Humanist Choir, which calls itself atheist as well, but doesn’t go for the jugular as they do. 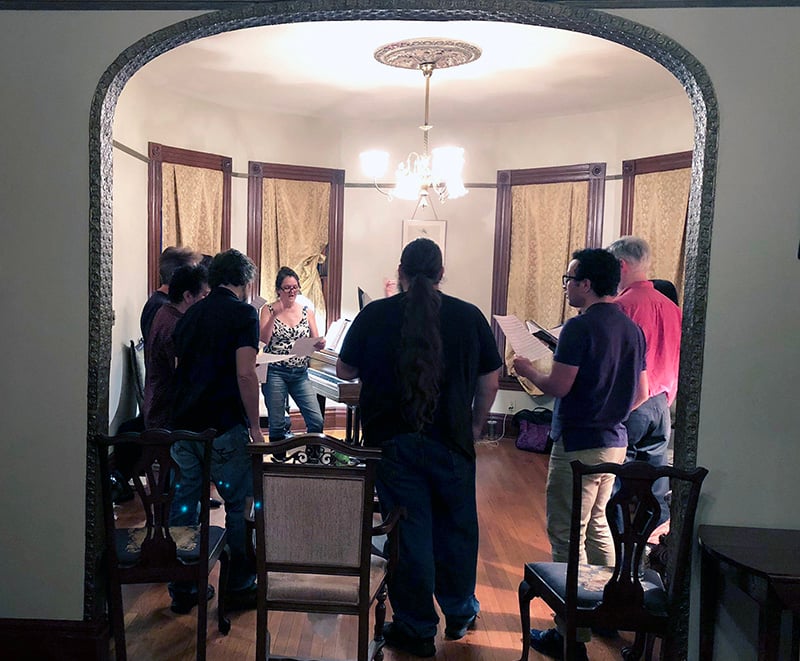 The Voices of Reason choir practices in Heretic House, a house in Los Angeles dedicated to hosting and promoting atheist events and groups, on April 22, 2018. RNS photo by Heather Adams

Schutzer offers “Imagine,” by John Lennon, as an example of a pop song that is a quintessential atheist song. “Imagine there’s no countries,” Lennon wrote. “It isn’t hard to do/Nothing to kill or die for/And no religion too.”

The group also sometimes changes lyrics to spiritual songs, as when they sing the “Evolution Chorus” to the tune of Handel’s “Hallelujah Chorus.”

One of their favorites is “Every Sperm is Sacred,” a spoof of anti-abortion Christians from the movie “Monty Python’s Meaning of Life.”

“There’s this fine line between humor and offense and we try to walk that line,” Schutzer said.

The real goal, however, seems to be less an attack on religion than a defense of atheism. Sharp, 37, a post-doctoral researcher at UCLA, maintains that in American society, “the belief in nothing is worse than the belief in something.”

According to a study by the Annenberg Public Policy Center of the University of Pennsylvania, 1 in 7 Americans incorrectly believe atheists don’t have the same First Amendment rights as believers. A 2015 Gallup poll found that 58 percent of Americans would support an atheist for president.

Perhaps what makes Voices of Reason most fit the term atheist choir is that they are looking for a church choir experience without the burden of believing. A number of members grew up in religious homes, often singing in religious choirs.

“I was very, very involved in the church,” said Sharp. “I was very gung-ho about God. I got up every Sunday, sometimes twice, and sang and did band and led the congregation in music.”

But it didn’t feel right and she dropped out of the worship team and eventually the church.

“I realized I’d been forcing myself to fit into somebody I thought I was supposed to be,” Sharp said. “I never looked back.”

Kirkhart also grew up going to church and missed the music and community. “Music is common to all humankind and is extremely important to bonding groups,” she said.

“Church has this way of bringing people together, to sing together and that connect to the person next to you, connect to the meaning of the songs,” Schutzer said.

A study published in the Psychology of Music in 2016 found that choral singers reported significantly higher feelings of well-being compared to solo singers, and described choral participation as more meaningful than being on a team sport. Other studies suggest that singing in a choir gives members more endorphins and regulates heart rates.

Daniel H. Pink writes about this concept in his book “When: The Scientific Secrets of Perfect Timing,” crediting the benefits of choral singing to the sense of belonging.

It may be that Voices of Reason provides its atheist singers and its audiences and members as much connection as it does entertainment.

“Voices of Reason is there to build a community,” Schutzer said.

Sharp goes further: “We’re all just good people trying to be better and trying to make the world a better place.” 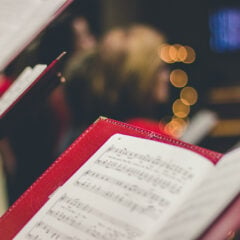