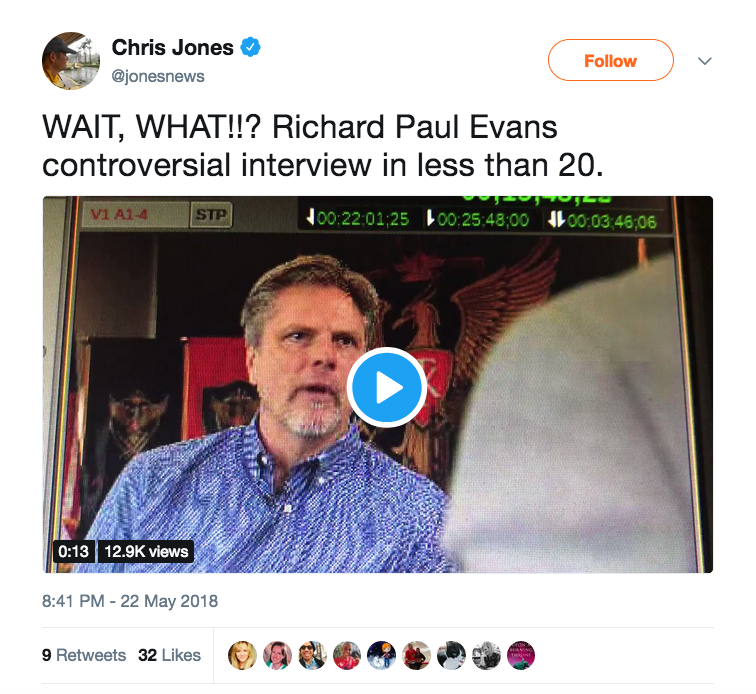 It hasn’t been a terrific week for Mormon novelist Richard Paul Evans, author of The Christmas Box and other bestsellers.

First, there were the accusations of sexual harassment, which erupted on Monday. A female author had accused Evans months ago of being overly physical with her last year at FanX, which is the huge annual Comic Con in Salt Lake City. She and numerous other authors, including award-winning Utah writer and fellow Mormon Shannon Hale, complained to FanX about what seems to be a pattern of inappropriate behavior from Evans. (You can read Hale’s overview of how badly FanX has handled the situation here.)

Then, in an effort to defend himself against those charges, Evans was interviewed by KUTV in Salt Lake. He succeeded only in digging himself in deeper.

KUTV reporter Chris Jones framed the clip by saying that “we expected him to maybe be contrite, maybe even offer up an apology . . . what we got was absolutely unexpected.” Here’s what Evans said in the interview:

There is a movement to hurt them [men] . . . There are books written saying, again, that men should be taken out, that they should account for no more than 10% of the population. Well, that makes us men feel like the Jews in Nazi Germany.*

On the specific allegations of sexual harassment, he says:

These [#metoo] trends tend to swing too far the other way, where innocent men are being caught up into it. And we’re in a culture where right now it’s a war on men.

Let me get this straight: A war on men, who are in a similar position to Jews in Nazi Germany?

A feminist agenda that mandates wiping out 90% of the male population?

What. The. Freaking. Hell.

I am a feminist who is reasonably well-read, and I’ve never heard of any kind of feminist plot to kill off 90% of men. So I duly Googled it and found exactly one article about one insane-sounding 22-year-old woman who proposed using genetic manipulation to limit the male species to less than 10% of the world’s population.

So, one utterly outrageous provocateur is, to Evans, a “movement” about which there have been “books written.”

For the record, let’s be clear: actual feminism is not about wiping out men (which, hello, would be disastrous for the entire human race) but about promoting equal opportunity for both men and women.

Full stop. That’s it. And the fact that Evans finds the prospect of equality dangerous—and even compares his situation to that of Jews in Nazi Germany—is pernicious and disturbing.

Yesterday, Evans issued a lukewarm apology of sorts for his comment about Jews.

“That was a very poor comparison though also slightly misunderstood,” he said. “I was referring to the Pre-Holocaust phase when the Jewish people were being unjustly blamed for everything that was wrong in society. Still, having met an amazing Holocaust survivor and hearing of the intense suffering he endured, I'm embarrassed for the comment and offer my sincere apology for such a stupid comparison.”

He should have stopped at “very poor comparison.”

No, the situation of men in America is not like Jews’ experience either before or during the Holocaust. Men are not being “unjustly blamed for everything . . . wrong in society.” Men are not a persecuted minority who are banned from owning businesses, serving in government, attending university, or—much to the point for a writer like Evans—selling their creative work in the form of literature, music, or art. All of those restrictions pertained to German Jews in the 1930s.

The fact that Evans could make a comparison so skewed and absurd is shocking. He actually seems to believe there is a “war on men” in America, and that men are in danger of wholesale annihilation.

The only proof I’ve seen him offer in interviews is to mention the rising tide of male suicide, which is an important point. We should all be concerned about increases in suicide, which have in recent years been particularly sharp among middle-aged males.

Evans has started a men’s group in Utah to reduce male isolation and encourage male support. So far, so good. But his group is not merely a therapy session or a bowling league; it is an organization that aims to make men kings.

“I coronate you to regal power as a warrior,” Evans tells an initiate to “Tribe of Kyngs” at a crowning ceremony.

Now, there are lots of ways to reduce men’s suicide rates. You could encourage them to get professional therapy and medication, for example, something that too many men refuse to do. You could challenge the “macho” culture that discourages men from expressing their deepest fears and feelings. You could even work on passing sensible gun laws, since a majority of men’s suicides happen with firearms.

But no, Evans chooses to work the problem by conferring actual kingship upon men, which is telling. His goal is not for men to have equality but for them to rule, to be designated as lords of all they survey.

I should clarify here that by “men” Evans seems to be talking primarily about “white men,” who are under particular attack, according to him.

So there you have it. In Evans’s mind the worst kind of racism being perpetrated today is not against African American men, who are being arrested or even killed for Walking While Black; or women of color, who are disproportionately singled out for sexual assault, but against white men.

His “Tribe of Kyngs” has no place for women, but it does offer something white men like Evans feel they deserve above all other human beings: a throne.