WASHINGTON (RNS) — The right-leaning Robert P. George and the left-leaning Cornel West may not agree ideologically, but the two intellectuals came to the nation’s capital to urge others to get to know people who are not like them, just as the Rev. Martin Luther King Jr. did.

A Baylor University event marking the 50th anniversary of King’s assassination aimed to shed light on the minister and civil rights leader who is “so often evoked and so rarely studied in any detail,” said Dean Thomas Hibbs, director of Baylor in Washington, the school’s outpost in the capital.

Organizers said they arranged for the discussion of King’s legacy as a display of brotherhood from two people of widely different perspectives. “Their friendship is a counter to so much of what ails our public life,” Hibbs told the audience at the luncheon at a Capitol Hill hotel.

Indeed, George, whose Twitter page features a photo of him embracing West, and West, who calls George “my conservative brother,” traded compliments as they each highlighted King’s theology.

“We’re a couple of guys with some pretty strong opinions, but we recognize nobody has a monopoly on the truth,” said George, professor of jurisprudence at Princeton University and a senior fellow at the Baylor Institute for Studies of Religion. “We have something to learn from each other, even across the lines of religious or theological or philosophical or political difference.”

George and West have worked together for 11 years, first jointly teaching a class at Princeton — with reading material ranging from Sophocles’ “Antigone” to King’s “Letter from Birmingham Jail” — and later drafting a statement on “freedom of thought and expression” on college campuses that reflects the stance they’ve been discussing together in public sessions.

West said he’s had to answer critics who can’t understand how he travels around the country with George: “I say, ‘Have you met him? Have you sat down and talked with him?’” 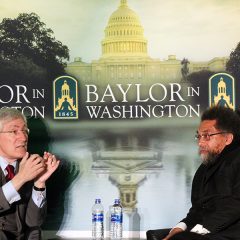 Panelists Robert P. George, left, and Cornel West discuss the life and legacy of the Rev. Martin Luther King Jr. on May 29, 2018, during a Baylor in Washington event. RNS photo by Adelle M. Banks 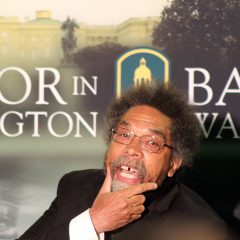 Cornel West speaks during a Baylor in Washington event on May 29, 2018. RNS photo by Adelle M. Banks 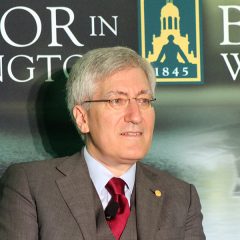 Robert P. George listens during a Baylor in Washington event on May 29, 2018. RNS photo by Adelle M. Banks 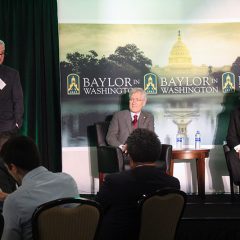 Dean Thomas Hibbs, left, director of Baylor in Washington, introduces panelists Robert P. George and Cornel West for a discussion on the life and legacy of the Rev. Martin Luther King Jr. on May 29, 2018. RNS photo by Adelle M. Banks

They sat onstage, comfortably taking turns highlighting how King had crossed divides in search of his goal of a “beloved community.”

West and George agree that the emphasis on King should be on his role as a Christian minister, though his civil rights activism is also grounded in his being a product of the black community.

“The last thing we ever want to do with Brother Martin is view him as some isolated icon on a pedestal to be viewed in a museum,” said West, professor of the practice of public philosophy at Harvard University. “He’s a wave in an ocean, a tradition of a people for 400 years so deeply hated, but taught the world so much about love and how to love.”

King’s approach was influenced by the Catholic theologian Thomas Aquinas, the Hindu leader Mohandas Gandhi and the Jewish philosopher Martin Buber, the two scholars noted, but did not bring him broad appeal during his lifetime. King was criticized not only by racist segregationists but by black activists who didn’t agree with his commitment to nonviolence, George said.

RELATED: From the black church to India: The theology of Martin Luther King Jr.

“It wasn’t that everybody agreed we got a hero,” said George, who thinks King’s image has become “sanitized” over the years. “It was only after April 4 , 1968, when he was assassinated, when he was martyred, that we began to have now the heroic King.”

West added that King never received a majority vote in a popularity poll as he worked towards his beloved community — the idea that all people are inherently good and equally deserving of justice and peace — but he said more people need to have that “unbelievable courage.”

“We learn from everyone, as Brother Martin, heroic humility,” said West. “That means that we ought to be jazzlike. We ought to not just lift our voices but recognize you can’t lift your voice without bouncing your voice off that of others.”

In brief interviews after their talk, the scholars said they hope their example will help others learn to listen to — and not just hear — people outside their individual tribes and silos.

“Listening means that you’re taking on more of what the person is saying,” said George. “You’re trying to understand it. You’re considering whether there might be some truth in it.”

West added that what’s unusual about their approach is that it’s public.

“There are examples of deep friendships and sisterhoods and brotherhoods across ideological, political lines,” he said. “People want to protect their image vis a vis certain constituencies.”