WASHINGTON (RNS) — Michael Curry, presiding bishop of the Episcopal Church, captivated a global audience earlier this month when roughly 1.9 billion people tuned in to watch the royal wedding of Prince Harry and Meghan Markle. The Most Rev. Curry’s charismatic, love-centered homily during the service sparked a media blitz that rocketed him to stardom and landed him interviews at virtually every major American news network.

At a time when both political and spiritual matters are often marked by division, the praise for his sermon — which focused on Jesus’ message of love — was a rare moment of unity.

But when Curry ascended to a pulpit again less than a week later (May 24), it was in a very different context. He was standing in the front of National City Christian Church in downtown Washington, where a crowd of more than 1,000 eagerly awaited his short sermon. The event, headed by a bevy of liberal-leaning Christians, was organized to promote a “Reclaiming Jesus” proclamation in which he and various signers declared, among other things, that President Trump’s campaign slogan “America First” was “a theological heresy.”

The audience erupted before Curry could utter a word, with members leaping to their feet in a pre-emptive 30-second standing ovation.

It was a dramatic example of how Curry’s fame is being celebrated by the religious left. But while his ascendancy has coincided with a surge of activism against the Trump administration by religious liberals, questions remain as to whether Curry will use his newfound global influence to bolster their cause, pursue a broader audience or both.

In Washington, Curry argued the Reclaiming Jesus statement was itself unifying.

“Bishop Curry has now become the love bishop,” said the Rev. Angela Brown, an attendee at the event and pastor at Glide Memorial United Methodist Church in San Francisco. “(His wedding sermon) was very good for me. … I just needed to know that love still matters to people … that love is what is going to get us through all of this madness.”

Curry’s recent conversations with the press do tend to center on Jesus and love. The bishop often pairs inflections of social justice-centered theology with appeals to a broader religious audience, such as when he lifts up his two models for public theology: famed civil rights activist Martin Luther King Jr. and evangelist Billy Graham.

“It may be that Billy Graham helped us to understand how to draw closer to and love God through his evangelism, and Dr. King helped us understand how do we draw closer to loving our neighbor through social justice and service,” Curry said in a recent interview with RNS. “It’s the same gospel, just different methodologies and approaches.” 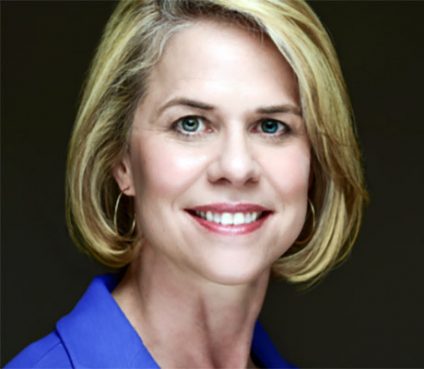 Whether Curry will be able to use that message to bridge the various divides in today’s America remains an open question. Marie Griffith, a professor at Washington University in St. Louis and director of the John C. Danforth Center on Religion and Politics, said Curry’s exemplars — while cordial with each other in their time — had followings that rarely overlapped.

Griffith explained that while Curry “looks to be someone who might be able to pull those groups together,” uniting people of faith across political differences presents major challenges. She said a hypothetical alliance of conservatives and liberals rallied by the bishop ”may flounder … on economic issues.”

Curry’s affiliation with the Reclaiming Jesus event is already triggering responses from conservative faith leaders close to Trump. Johnnie Moore, the de facto spokesman of Trump’s unofficial evangelical advisory board, acknowledged the event in a statement, saying faith leaders should focus on “common good” and calling Curry “a good man” but “a classic liberal in his theology.”

Fellow Trump faith adviser and Texas pastor the Rev. Robert Jeffress, who is represented by Moore’s communications firm, was far more direct in his criticism during an interview with Fox Business Network’s Lou Dobbs.

“I think Bishop Curry and these other pastors are sincere, but they’re sincerely wrong,” Jeffress said, arguing biblical commandments regarding charity are directed toward individuals, not governments. “I think instead of protesting tonight, these pastors ought to be having a prayer meeting and thanking God that we have a president like Donald J. Trump, who is willing to do whatever it takes … to fulfill his God-given responsibility of protecting this country.”

Criticism from the religious right may also stem from having to share the national stage with the more liberal Curry. The Rev. Kelly Brown Douglas, a theology professor and dean of Episcopal Divinity School at Union Theological Seminary, argued the bishop’s prominence has the potential to raise the profile of faith voices outside of conservative Christianity.

“I’m not sure (Curry’s fame) changes the way he interacts with those political moments, but it does change the way other people interact with those political moments,” said Douglas, who has known Curry for years and attended the Reclaiming Jesus event. He is “also challenging the church to be church. … Are we going to leave him out there, or are we going to join him?” 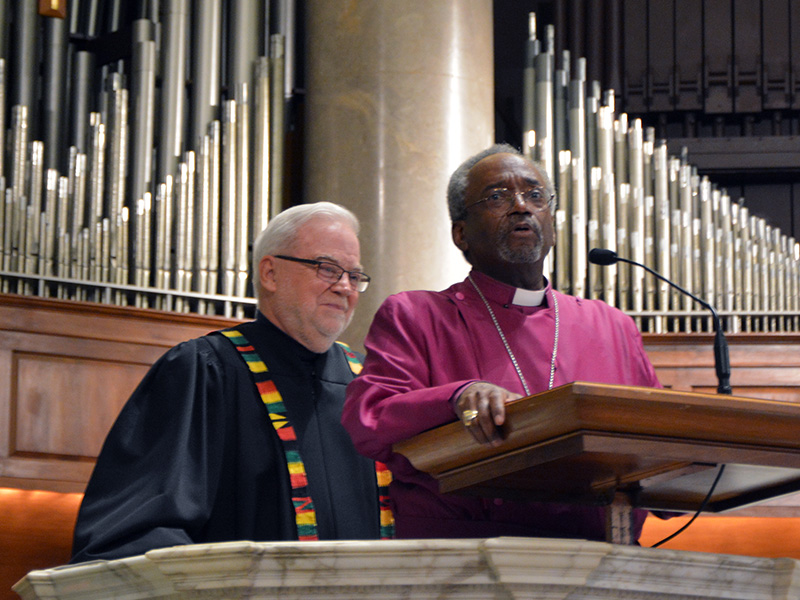 Bishop Michael Curry, right, speaks at a Reclaiming Jesus event in Washington on May 24, 2018. RNS photo by Jack Jenkins

Curry was joined on stage in Washington by a cadre of prominent leaders whom organizers called “elders” — activist pastors, bishops and theologians — largely assembled by the Rev. Jim Wallis, head of the Christian social-justice advocacy group Sojourners. Wallis lauded Curry’s sermon several times during various interviews, saying, “God used a royal wedding to have the gospel preached probably to the largest audience at one time.”

Curry’s fellow elders also acknowledged the unusual nature of conservatives reacting to his activism, as recent years have seen figures on the religious right largely ignore the arguments of liberal faith leaders. Shortly before a press conference on Friday (May 25), several gathered around the presiding bishop to chatter excitedly about Jeffress’ news segment.

Curry laughed off Jeffress’ comments. Curry’s office did not respond to a request for comment on the subject. And it certainly hasn’t dissuaded him from participating in political conversations.

“I really do believe that if we will commit to the way of love, this unselfish way of living, that we would have a different politics,” he told RNS. “A different way of doing business and economics … a different way of relating to each other. I just want to be able to help that to happen.”

He went on to insist that King and Graham “shared a similar message” with “two different methodologies … one more evangelism, the other more social justice.”

Curry also appeared on MSNBC over Memorial Day weekend alongside the Rev. William Barber II, arguably the most prominent modern religious left activist. Barber is co-leading the Poor People’s Campaign, a 40-day initiative to draw attention to issues such as systemic racism and poverty. The Episcopal Church is a partner in the campaign. Barber echoed the presiding bishop’s love-rooted rhetoric when discussing issues of income inequality and health care.

Still, observers note the religious left’s profile began rising long before Curry gave his sermon. Wallis, an evangelical and longtime fixture of  conversations about religion and politics, pointed out that the Reclaiming Jesus website received 1 million views prior to the royal wedding.

“It’s a Pentecostal energy,” Wallis said, noting the event — and Curry’s role in it — were also planned before the wedding.

Several implied that Curry’s rhetoric, while cast as liberal theologically and politically by Trump’s advisers, is precisely what triggered his success alongside people such as Barber and Wallis.

“His message has filled a hole, responded to a hunger that people have had,” Douglas said, saying public discourse involving faith has long been monopolized by conservative Christians. She noted that Americans are not only captivated by Curry, but also by his message.

Curry’s meteoric rise and media savvy have allowed him to occupy spaces of influence other liberal Christians have only dreamed of. Fox News representatives noted he appeared on the network last week, for example, and confirmed to RNS that Curry has been asked to be a guest on “Fox & Friends,” a morning news discussion show frequently watched by Trump.

Ultimately, Griffith said, Curry’s success is a window into the evolving nature of the religious left and also offers a hint at why both the movement and Curry have been ascendant under Trump. But it remains to be seen how long Curry will be able to make the most of his moment.

“In a month, will people who watched Curry be able to remember his name, what the message was, or what all the fuss was about?” she said. “That’s the question: Is this sustainable over time? And there is no way to predict that.”

This article originally stated that Lou Dobbs was with Fox News. His employer, Fox Business Network, is also owned by 21st Century Fox, but is a separate network.