Often called Buddha Day or Buddha’s Birthday, Vesak normally falls in late April or May, according to the lunar calendar, but different branches of Buddhism observe it on different dates.

In Malaysia, where Buddhism is the second-largest religion after Islam, Buddha Purnima (as Vesak is called locally) is a national holiday that brings together Buddhist communities from many of the country’s widely varying ethnic and social groups.

As Vesak approaches, temples in the capital, Kuala Lumpur, are transformed into hives of activity, with throngs of people volunteering to help with preparations. When the day arrives, families come to the temples seeking Buddha’s blessings. They bathe the Buddha statues with tea and water in a ritual of purification and cleansing of the soul. Devotees burn joss sticks and lotus-shaped candles, meditating on Buddha’s teachings.

“The reason I go to the temple is to remind myself to practice harder towards enlightenment and to get in touch with the Dharma,” said Lee Lee Loh, a Buddhist from Kuala Lumpur. “Vesak is a day for practice, so we do chanting, meditation, we pay respect to Buddha, Dharma and Sangha.” 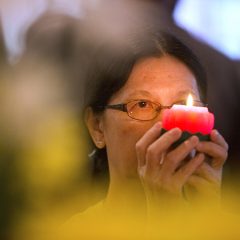 A devotee prays holding a lotus-shaped candle at Thean Hou Temple in central Kuala Lumpur, Malaysia, on May 29, 2018, while celebrating Vesak. RNS photo by Alexandra Radu 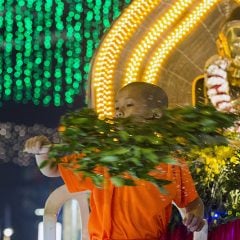 A Buddhist novice blesses devotees with holy water during the Vesak procession in Kuala Lumpur, Malaysia, on May 29, 2018. The 7-mile procession is the highlight of the celebration, with more than 25,000 people attending the annual event. RNS photo by Alexandra Radu Devotees light lotus-shaped candles in the shrine room of the Kuan Yin Temple in Kuala Lumpur on May 29, 2018. In Buddhism, the lotus flower symbolizes the purity of the body and mind, rising above attachment and desire. RNS photo by Alexandra Radu 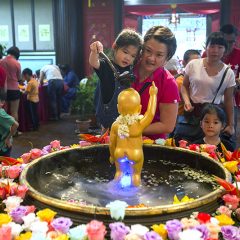 Buddhists come to the temples with their families to celebrate Vesak in Kuala Lumpur, Malaysia. People bathe Buddha statues in temples with both tea and water in a ritual of purification of the soul. RNS photo by Alexandra Radu 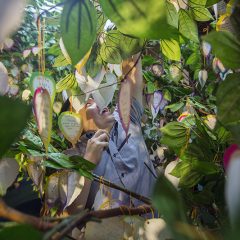 A Buddhist devotee hangs a piece of paper with a wish written on it on the branch of a wishing tree at Thean Hou Temple, one of the main Buddhist temples in Kuala Lumpur, Malaysia. RNS photo by Alexandra Radu 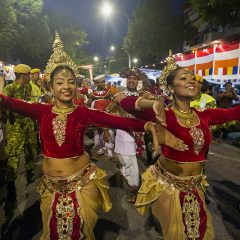 Dancers perform traditional Malaysian dances during the start of the Vesak procession at the Buddhist Maha Vihara Temple in Kuala Lumpur. RNS photo by Alexandra Radu An attendee bathes a Buddha statue with water decorating one of the Vesak chariot floats in Kuala Lumpur, Malaysia, on May 29, 2018. RNS photo by Alexandra Radu 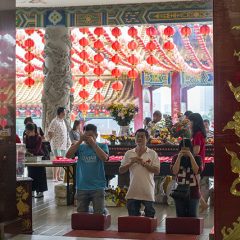 Buddhists celebrating Vesak, or Buddha Purnima, burn joss sticks and pray at the entrance of the shrine room of the Thean Hou Temple in Kuala Lumpur, Malaysia, on May 29, 2018. RNS photo by Alexandra Radu

A monk from the Nepalese Buddhist community in Malaysia blesses the devotees attending the Vesak procession with holy water in Kuala Lumpur. RNS photo by Alexandra Radu 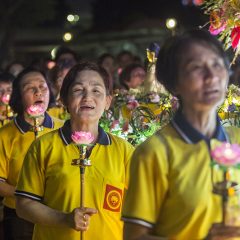 Devotees holding lotus-shaped candles chant mantras while accompanying a float during the Vesak procession in Kuala Lumpur, Malaysia, on May 29, 2018. RNS photo by Alexandra Radu A float decorated with a giant Buddha head sculpture passes through the crowds attending the Vesak procession in Kuala Lumpur, Malaysia, on May 29, 2018. Volunteers from the Chempaka Buddhist Association near Kuala Lumpur built the float over the previous two months. RNS photo by Alexandra Radu 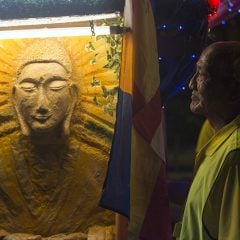 A devotee walks behind a chariot decorated with an image of Buddha during the Vesak procession in Kuala Lumpur, Malaysia. RNS photo by Alexandra Radu

In the Malaysian capital, the highlight and culmination of Vesak is a 7-mile candle and chariot procession through central Kuala Lumpur. All the Buddhist associations from Kuala Lumpur and surrounding areas participate with chariots, or parade floats, decorated with statues of the Buddha and flowers, on top of which monks sit and bless the crowds with holy water and flower petals. The theme of this year’s procession was “Harmonious Society Through Tolerance and Understanding.”

“This year we have 28 chariots participating, representing not only Malaysian Buddhist communities from around Kuala Lumpur, but also the Nepalese, Thai, Bangladeshi, and Taiwanese Buddhists living in Malaysia participate,” said Ng Han Kok, head of the Chempaka Buddhist Lodge float team, one of the Buddhist associations near Kuala Lumpur.

More than 25,000 devotees participated in the procession. Some walk along with the chariots, bathe the Buddha statues on the floats, chant mantras, and other attendees watch the procession from the roadside, receiving blessings from the passing floats.

“We designed our own floats,” he said. “A team of about ten people worked for two months on building and decorating them. It was all volunteer work and the materials for building the floats were also sponsored by devotees. We volunteer for the benefit of the community and for our devotion to Buddha. Participating in the Vesak procession brings our communities closer, there is a spirit of togetherness and multiracial harmony.” 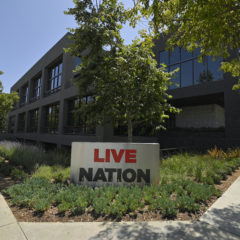 Faith
Interfaith group: No Buddhist or Hindu statues in nightclubs 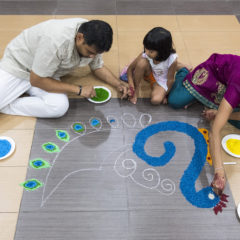 News
At Diwali, a Malaysian family mixes local traditions with ancient Hindu rituals
Follow us on Facebook!
Submit your photos to RNS