LOS ANGELES (RNS) — In May of 2017, Kim Hak Song was on a train on his way back to Dandong, China, the border city where he’d entered North Korea some weeks before, when members of the North Korean security service approached him.

The government agents accused him of hostile acts toward North Korea, and said they had evidence against him. It would be easiest if he simple confessed.

“I was thinking, I don’t know what I did wrong,” Kim said through a translator last week (June 2) at his home church, the Oriental Mission Church in East Hollywood, after a service there. In his first extended public comments since being released from a North Korean prison May 9 Kim preached and gave testimony about his detention.

When he asked his captors what hostile acts he reportedly committed against North Korea, he was told his crime was prayer.

Prayer, he thought, was normal. The North Korean government, he said, did not.

Like Tony Kim, another of the American detainees released last month, Kim Hak Song had been working at Pyongyang University of Science and Technology, a school founded by evangelical Christians and attended by elite North Koreans.

Born in China to Korean parents, Kim Hak Song came to the United States in the mid-1990s, got his citizenship and attended seminary. It was while studying, he said, that he had developed an interest in North Koreans’ plight. After his ordination in 2004, Kim Hak Song returned to China to study agriculture, but eventually, he moved to Pyongyang. He had been working at an experimental farm run by the university until shortly before his arrest.

On Saturday, Kim Hak Song said he had gone to China with the blessing and financial support of the Oriental Mission congregation. But he had ventured into North Korea, he said, without discussing it with the church members back home. 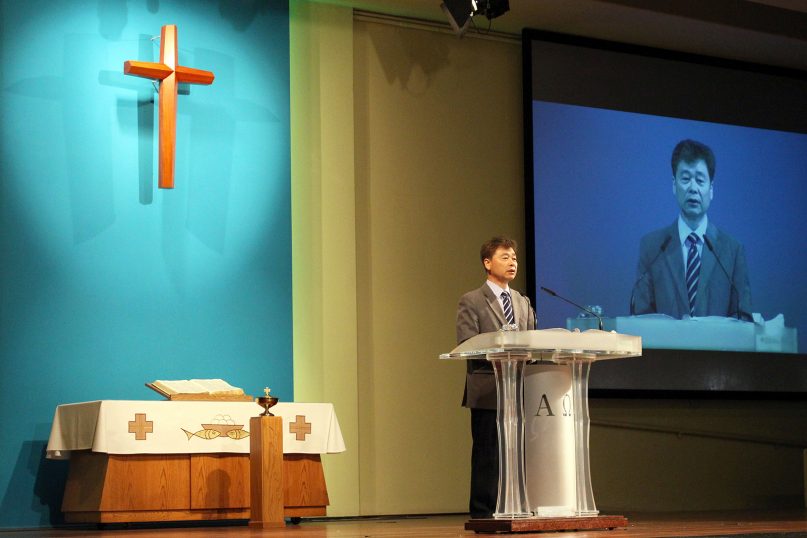 Kim Hak Song speaks to the Oriental Mission Church congregation in East Hollywood on June 2, 2018. Kim Hak Song was recently released after being detained for a year in North Korea. RNS photo by Heather Adams

When the church found out Kim Hak Song had moved to North Korea, said the Rev. Peter Joo, a pastor at Oriental Mission Church, an Independent Holiness Church, “We prayed for safety because we know what is happening in North Korea.”

Kim Hak Song has denied that he broke North Korean laws against the promoting religion. But his captors showed him an email he had sent to the elders of the Oriental Mission Church asking them to pray for the people of North Korea. They also had records showing he had led early morning prayer for a worship group.

According to the State Department’s most recent International Religious Freedom Report, North Korea is holding up to 120,000 political prisoners, more than 1,300 of whom are charged with religious violations.

Kim Hak Song said he was not tortured during his imprisonment, but he still “felt the pain and struggle,” according to his wife, who says he is still dealing with the trauma.

About a month after Kim Hak Song’s arrest, American college student Otto Warmbier, who was serving 15 years in prison after being accused of theft while on a trip to North Korea, died of brain injuries shortly after being abruptly released and returned home. Since then the Trump administration had increased pressure on North Korea to release Kim Hak Song and the two other detained Americans.

Then this spring diplomacy between North Korea and the White House began to heat up, and Secretary of State Mike Pompeo began a dialogue with Pyongyang in advance of a planned summit between Trump and Kim Jong Un on June 12.

On May 9, President Trump announced the three detained Americans — Kim Dong Chul, Kim Hak Song and Tony Kim — were on their way home on Pompeo’s plane.

Joo said his church members were overcome with joy when they heard Kim Hak Song was safe and on his way back to the United States.

Kim Hak Song said he’s no longer allowed to return to China or North Korea, but he said he’s praying about what to do next.

He’s convinced that his time in North Korea wasn’t wasted. While detained, Kim Hak Song said, an official asked him to write about Christianity. He said he started with Genesis, the first book of the Bible.

“I was grateful and thankful that at this time I was able to share God’s message to this person,” he said.

He also said he spent a lot of time during his detention in prayer — confessing his sins, big and small, being thankful and asking God to watch over his family.

The day he was released he thought he was simply being moved. Guards told him to gather his belongings and asked if there was anything else he needed.

The answer: his Bible.

It wasn’t until he was boarding a U.S. government plane, Bible in tow, that he knew he was being released to freedom.

Kim Hak Song said he was unaware that conversations had been going on between the United States and North Korea — most of the time he didn’t even see sunlight or know what day it was. But he said he had had dreams of being inside Trump’s car and the American people clapping for him.

“The dream became reality,” he said. “God is walking with us.”

Since landing, he’s satisfied a craving for hamburgers, taken measures to assure his family would be financially cared for if he were to die — a fear he had while imprisoned in North Korea — and has begun sharing his testament.