“Is it possible to be a lukewarm Christian?” he asked his listeners on a recent Sunday morning at The Summit, his North Carolina megachurch.

Standing onstage in gray jeans, a polo shirt and a scruffy stubble, he likens halfhearted Christians to lukewarm coffee. Hot is good, so is cold, he said. But lukewarm coffee makes you want to spit it out.

“There’s no middle ground,” he implores. “You’re either committed to the mission and living all in for Jesus, or you’re not.”

Greear’s sermons draw crowds of nearly 11,000, including an enviable number of college students and young adults, to hear a bracing Christian message he calls a mixture of truth and grace: Sin is real. There’s no salvation outside of faith in Jesus. God’s grace is amazing, but may not last.

It’s the same kind of unvarnished evangelical message he now hopes to parlay into what may be his new role, as president of the Southern Baptist Convention, the nation’s largest Protestant group.

Southern Baptists meeting in Dallas June 12-13 will pick their next president, and the 45-year-old Greear is widely expected to win. (Ken Hemphill, 70, a former seminary president, has also allowed his name to be placed in the running.)

If he does, Greear will become the youngest SBC leader in nearly 40 years to assume the one-year post — which is typically renewed one additional year — and the first Generation X president.

It couldn’t come at a better time.

For nearly a month, Southern Baptists have faced national media scrutiny for a #MeToo moment as one of its most prominent leaders has battled a slew of allegations he demeaned women. Fired from the presidency of Southwestern Baptist Theological Seminary, Paige Patterson represents an older guard whose understanding of women’s place in church and society is fast being replaced by a younger generation unwilling to put up with spousal abuse, sexism or chauvinism.

As the denomination wrestles with Patterson’s downfall — and a decrease in membership and baptisms — the Southern Baptist Convention is sorely in need of a makeover. Greear’s fresh, younger face may be exactly what it needs.

Greear, who studied with Patterson, has already made clear he has no tolerance for sexual misconduct.

“Abuse can never be tolerated, minimized, hidden, or ‘handled internally,’” he said responding to  remarks Patterson made that abused women should stay with their husbands. “Those in leadership who turn a blind eye toward abuse are complicit with it and must be held accountable.”

To be sure, Greear doesn’t advocate for women’s ordination. At his church, a woman would never appear onstage by herself to deliver a sermon. Neither does he support revisiting the Baptist statement of faith requiring wives to submit to the leadership of their husbands.

In many ways, J.D. Greear is a conventional Southern Baptist.

Though he grew up 25 miles from Winston-Salem attending a Baptist church, not affiliated with the SBC and spent his first year out of high school at Word of Life Bible Institute, his undergraduate, graduate and doctoral degrees were all earned at Southern Baptist-affiliated schools.

At Southeastern, Patterson was Greear’s Ph.D. adviser, a man he described as “a beloved figure in my life.”

From Patterson, Greear learned the centrality of mission work, and it has marked his career. 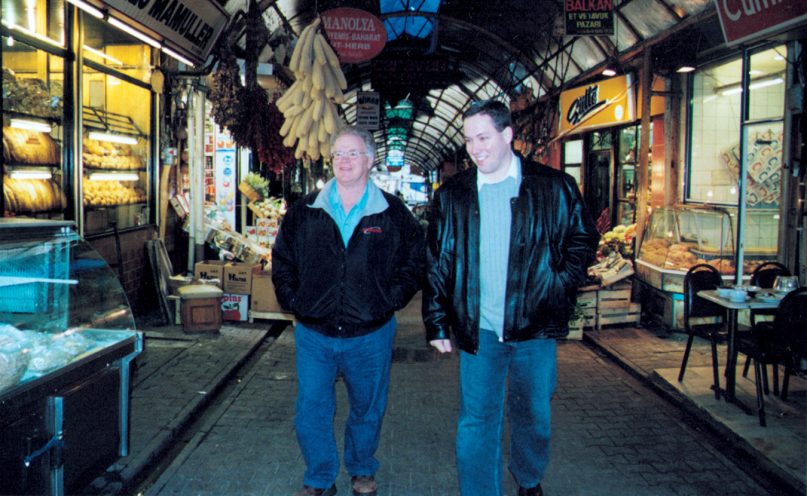 There’s a saying that Greear likes to repeat and pastors on his staff like to parrot: “We judge success not by our seating capacity but by our sending capacity.”

The Summit Church, which he has led for 16 years, sends out more missionaries than any other church in the Southern Baptist Convention.

About 1,000 members are involved in church planting or evangelism missions at home and abroad. Of those, 153 serve overseas through the Southern Baptists’ International Mission Board.

Greear, who himself served as a missionary in Southeast Asia for two years before becoming a church pastor, believes missions are the key to both his faith and the Southern Baptist Convention’s success.

He wants to see more church members go on missions and he wants to engage more young people to use their professional training in the service of their faith.

“It used to be that being called to mission was a special calling that a few people got and then went to seminary,” Greear said. “We’re going to throw that away. All are called to live on mission.”

A knack for reinvention 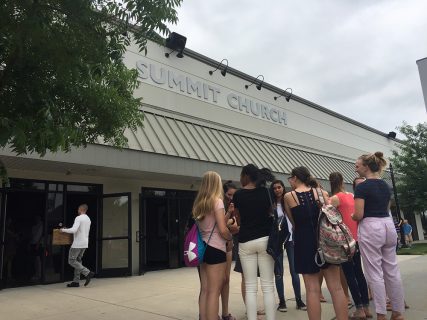 A group of women talks outside The Summit Church in Durham, N.C. after Sunday services on June 3, 2018. RNS photo by Yonat Shimron

In other ways, Greear represents a younger generation of Southern Baptists who are more urban, more entrepreneurial, more eager to transcend partisan divisions.

His church is a good example. Greear didn’t start The Summit Church. He reinvented it.

After returning from Southeast Asia, he took a job as a college pastor at Homestead Heights Baptist Church, a Durham congregation of a few hundred members. One year later, the church asked the 29-year-old Greear to become its senior pastor.

He accepted on the condition that the congregation be renamed, dropping the word “Baptist.” The tactic has since been adopted by many Baptist churches as a way of sidelining the narrow denominational identity and making it more attractive to a wider public.

As The Summit Church grew, he convinced the congregation to sell its Colonial-style building with white steeple and rent space in a high school gym. 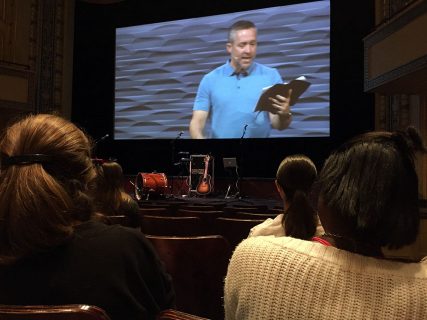 J.D. Greear’s sermon is livestreamed to the Carolina Theatre in Durham. RNS photo by Yonat Shimron

A few years later, the church bought a warehouse in an industrial area near the high-tech Research Triangle Park and retrofitted it in the style of many big-box churches with no windows and a nondescript utilitarian feel.

The worship space seats 1,000 so the church rents space at 10 additional locations, including a Chapel Hill site that mostly serves students at the University of North Carolina and at two Raleigh prisons, all of which receive Greear’s sermons by livestream.

The congregation is increasingly pushing into nearby Raleigh, building a $30 million, 1,800-seat sanctuary in the northern suburbs slated to open next year. It plans on keeping all its other locations.

The Summit is known around town for its good works, and Greear boasts that the Durham County Department of Social Services tracked a direct uptick in the number of foster child adoptions to when he began encouraging members to get involved.

At the same time, the church has mostly steered clear of politics. While many older Southern Baptists, like evangelicals generally, are enthusiastic supporters of President Trump, Greear has closely guarded his views. 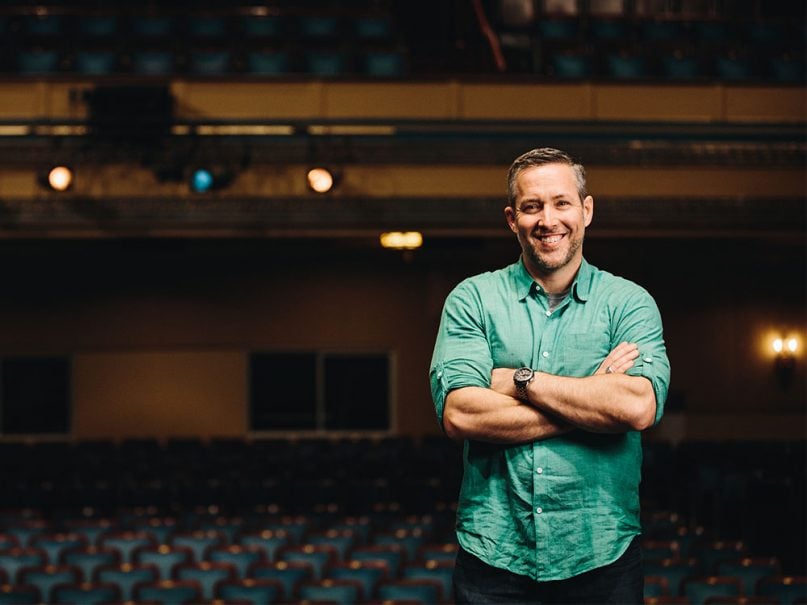 Unlike Robert Jeffress of First Baptist Church in Dallas, former SBC President Ronnie Floyd, or Johnnie Moore, who was co-chairman of the Trump campaign’s evangelical advisory board — all Southern Baptists — there’s little mention of politics at The Summit.

And that may be part of its secret.

Greear’s typically begins his sermons with “Open your Bibles,” and though a prayer may be lifted earlier in the service for victims of a school shooting or a natural disaster, Greear doesn’t touch politics.

“The younger generation has a hunger for getting beyond the partisan stuff and saying, ‘What’s it like to follow Jesus in 2018 and not be a Republican Christian or a Democrat social progressive Christian?” he said. “Our general approach is that the church as an organization should not typically get involved in the particulars of policy but should limit itself more to teaching the truth.”

A service at The Summit unfurls like so many other contemporary churches.

It opens with a praise band led by three singers. At The Summit Church, one of those is invariably African-American. Racial diversity is important to Greear, and among the campus pastors are several minorities, including an African-American, an Asian-American and a Hispanic.

But the main event is the sermon, and Greear’s tend to run long — about 45 minutes.

Unlike some megachurch pastors who carefully cultivate their persona, Greear seems to spit out his message in a straight-shooting, no-frills style.

“I’ve never seen a hint of J.D. Greear trying to manage his image,” said Clayton King, a pastor at NewSpring Church in Anderson, S.C.,  and a friend. “He could care less.”

King said Greear is not a visionary but a steady captain. His talents lie in his youthful energy and his passion for Jesus.

“J.D. moves at an iceberg pace,” King said. “An iceberg may move slowly but it carries everything with it. I don’t think about him necessarily being a trailblazer as much as I think about him being a slow, steady, consistent faithful pastor and shepherd.”

So far, women, minorities and younger evangelicals gravitate to that approach.

“What sets him apart is that he remains true to Scripture on a number of theological questions that are considered difficult for Christians,” said Jodi Jackson Tucker, who has been attending the church for two years.  “He continues to attract many, many young people.”

For Southern Baptists, enmeshed in criticism about sexism and political polarization, that focus on the faith’s basic teaching may be exactly what they need.