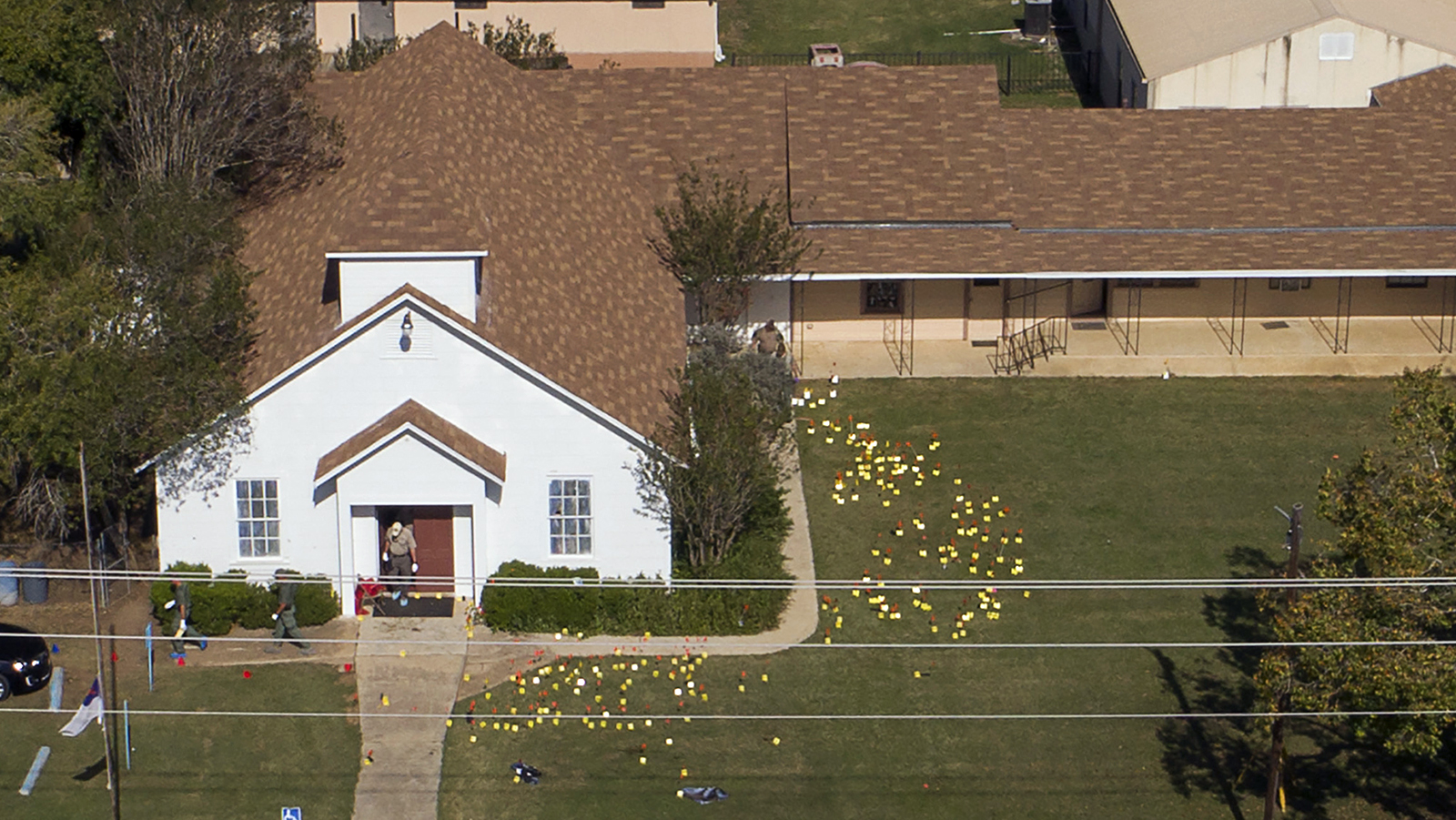 Flags mark evidence on the lawn of the First Baptist Church in Sutherland Springs, Texas, Monday, Nov. 6, 2017, a day after over 20 people died in a mass shooting Sunday. (Jay Janner/Austin American-Statesman via AP)
June 10, 2018
Yonat Shimron

DALLAS (AP) — A family that lost several relatives during a mass shooting at a Texas church says the federal government was negligent by failing to report the gunman's criminal information to a national database, according to a lawsuit filed this week.

The suit, filed in federal court in San Antonio, said that even though gunman Devin Patrick Kelley was criminally convicted while in the Air Force the military failed to enter the information into a database used to conduct background checks of gun buyers.

The error, according to the lawsuit, allowed Kelley to buy the assault-style rifle he used during the November shooting in Sutherland Springs that killed more than two dozen people. The Holcombe family suffered about a third of those deaths.

"We think this entire tragedy could have been avoided," said family's attorney Rob Ammons in an interview Friday (June 7). He said an unborn child was among the Holcombe family members killed.

The litigation said the Air Force acted recklessly and carelessly in not reporting Kelley's criminal information to a federal database.

The federal suit was filed on behalf of Joe and Claryce Holcombe. The lawsuit said their son, John Bryan Holcombe, was murdered while walking to the pulpit at the church.

It is difficult to sue the federal government under a principle called sovereign immunity. The lawsuit filed over the Texas shooting cited The Federal Tort Claims Act, which allows such suits in certain circumstances.

The litigation is one of several lawsuits that have been filed following high-profile mass shootings that have garnered national attention and stirred debate.

Some of the surviving victims of a massacre at an Orlando nightclub were filing a lawsuit in federal court Thursday, saying authorities and city did not to try to stop the shooter.

Antonio Romanucci, a Chicago attorney, said there has been an uptick in the amount of litigation regarding mass shootings. When people see inaction on gun regulations at the federal level, he said, civil lawsuits can be an option for victims to pursue change and justice.

"I think litigation plays a very important role in these cases," he said.