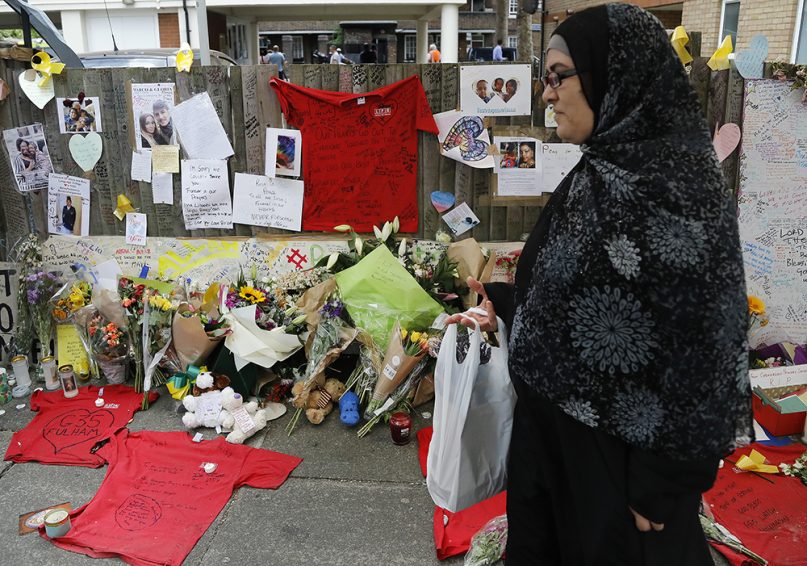 A woman passes messages and flowers left in tribute to missing people near the Grenfell Tower apartment building in London, on June 23, 2017.  (AP Photo/Frank Augstein)

LONDON (RNS) — Kensington in West London is one of the wealthiest areas of Britain. It is also home to some of the country’s poorest and most marginalized people. One year ago on June 14, a fire broke out in Grenfell Tower, a 24-story tower block occupied by approximately 600 families. Many of them were recent immigrants; others had lived there for years. Seventy-two people died, the majority of them Muslims.

But from the tragedy has emerged an awareness of the ways that Britain’s Muslims and other faith communities contribute to their neighborhoods. Though they haven’t escaped all stigma lingering from Islamic terror attacks on British soil, Muslims’ response to the Grenfell Tower fire has highlighted their social and charitable engagement.

“I would hope that that acknowledgement of their contribution would carry on,” says Elizabeth Oldfield, director of Theos, a London think tank that researches faith in public life. “But it’s an uncomfortable fact for people given what else is in the public narrative about religion around extremism or abuse or outdated ideas. So there are reasons why people would rather not notice the work being done on the ground.” 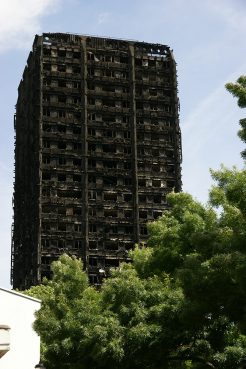 The charred remains of Grenfell Tower on June 16, 2017, in west London. Photo courtesy of Creative Commons

The public inquiry into the fire opened this May, with survivors paying tribute to the relatives they lost, including one stillborn baby. The stories were harrowing.

“The struggle to go on, the pointlessness of everything, were themes in testimony after testimony,“ wrote one observer. “And yet there was so much faith in the room, notably Islam.”

The faith of residents living around Grenfell Tower is evident from the mementos hung on railings and the graffiti painted onto concrete walls around the Lancaster West Estate.
“Oh Allah, I ask you to grant me paradise, and I take refuge in you from the fire,” reads one prayer. Another quotes Psalm 61: “From the ends of the earth will I cry to you when my heart is overwhelmed.” And then there’s the simple statement: “God’s not sleeping.”

That the fire occurred during Ramadan likely means that lives were spared. The fire broke out at about 1 in the morning, when many Muslims were on their way home from breaking their fast at the Al-Manaar mosque, part of the Muslim Cultural Heritage Centre, opened by the Prince of Wales in 2001 and used by 5,000 people every week. The center had food and water on hand to distribute and a building to offer as emergency refuge. Local churches began opening early in the morning. Later in the morning, Sikh volunteers arrived from the gurdwara in Southall, a few miles away. In the chaotic hours and days after the fire, it was faith groups and volunteers rather than the borough council that were visible, struggling to meet the needs of a traumatized community.

People who had lost their homes were left with nothing, but Al-Manaar Chief Executive Officer Abdurahman Sayed says that even in the early days, it wasn’t necessarily the material needs that were most pressing. Soon, the center was providing counseling, art therapy for children, massage and acupuncture. (Placing needles on specific sites of the ear is believed to relieve stress and trauma.) 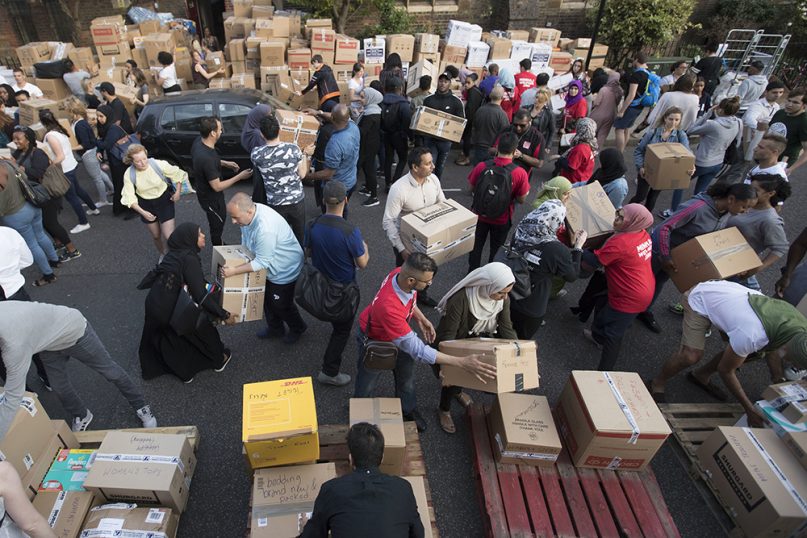 Volunteers organize donations near Grenfell Tower in west London, on June 15, 2017. A massive fire raced through the 24-storey high-rise apartment building in west London the day before. (AP Photo/Tim Ireland)

A new report from Muslim Aid, a UK-based Islamic charity group, calls for the proper recognition of faith communities as a vital element in emergency planning. It recommends that Muslim organizations in particular be brought into the mainstream of UK disaster management.

London’s religious complexion is not typical of Britain. Londoners are twice as likely to attend places of worship than are British citizens as a whole. Mass immigration has driven the demand for black Pentecostal churches in the capital, where there are now 400 mosques. This begs the question of whether faith communities in less religiously diverse parts of the country would have the energy or resources to respond to a disaster in the same way.

Some commentators suggest that the public conversation about religion and Islam has shifted in light of the enormous contribution made by faith groups after the tragedy. That discussion will continue for months to come as the investigation keeps the Grenfell fire in the public eye. In looking at Islam and the other faith groups that responded to the disaster, it might be easier for the British to say one year later: God’s not sleeping.

Rosie Dawson is a freelance journalist based in Manchester, England, and an associate research fellow with the William Temple Foundation, a think tank exploring the role of religion in public life.