Vice President Mike Pence, projected on video screens, references a note given to him by Americans who were detained in North Korea while addressing the Southern Baptist Convention’s annual meeting on June 13, 2018, in Dallas. RNS photo by Adelle M. Banks

DALLAS (RNS) — Vice President Mike Pence touted President Trump’s meeting with North Korean President Kim Jong Un in a speech before Southern Baptists and urged their continuing prayers as the administration moves ahead with negotiations to seek peace on the Korean Peninsula.

The speech drew cheers from a friendly crowd as Pence tallied accomplishments popular with evangelicals in areas from abortion to aid for persecuted Christians abroad. Concerns raised one day prior about the denomination appearing too cozy with one political party faded to the background when he took the stage.

“While strong American leadership has accomplished much, he and I both know that the effective and fervent prayers of a righteous people availeth much,” Pence said on Wednesday (June 13), referencing the Book of James from the New Testament. “Let’s all pray, pray for peace for the Korean people and the world.”

The day before his speech, a messenger, or delegate, requested reconsideration of the plans to welcome Pence. He was overruled.

Pence, in a speech that sometimes resembled a sermon, pulled out of his pocket a small card he said he received on the tarmac of Andrews Air Force Base from the three American hostages who arrived from North Korea a month before Trump’s meeting with Kim. On it they wrote their thanks for the vice president’s prayers and the administration’s efforts to bring them home.

“Then I flipped over the card and looked on the back and they had transcribed a portion of Psalm 126,” he said. “’When the Lord brought back the captives to Zion we were like men who dreamed. Our mouths were filled with laughter and our tongues with songs of joy.’” 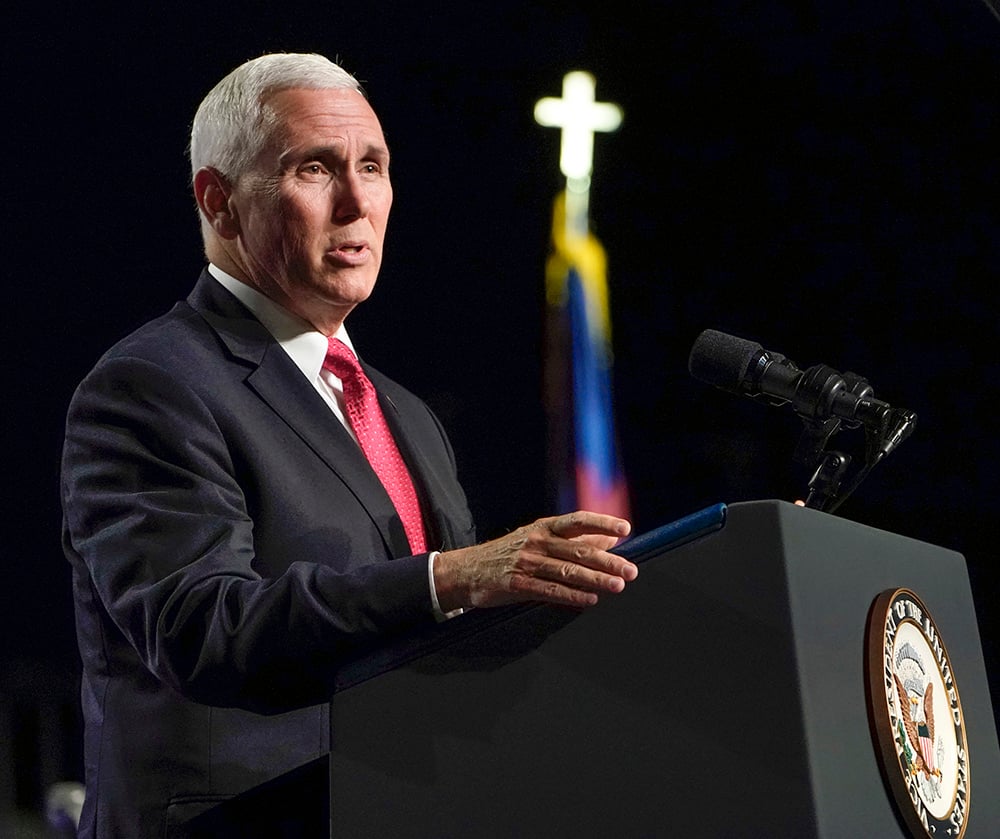 In his 35 minutes before a packed hall of the Kay Bailey Hutchison Convention Center, Pence ticked off accomplishments and plans of the Trump administration that have particularly appealed to many evangelicals, including Southern Baptists. He cited their continuing efforts to aid religious minorities across the globe and protect religious liberties in the U.S. and the decision to move the U.S. Embassy from Tel Aviv to Jerusalem.

Baptists rose to their feet when he proclaimed that Trump was the “most pro-life president in American history.” Pence mentioned that the president’s first act in office was to re-establish the so-called “Mexico City Policy,” which halts government funding of groups that support or conduct abortions overseas, and that Trump acted more recently to prevent Title X family planning funding from going to any domestic programs that provide abortions.

The vice president praised Southern Baptists for their offering aid across the country when disaster strikes. He recalled visiting Sutherland Springs, Texas, after the shootings at a Southern Baptist church in November. He pointed out the church’s pastor, Frank Pomeroy, who he said told him backstage that one of the injured was now leading three Bible studies, including one for nurses who requested he lead one after he was discharged.

“Today, on behalf of the president I want to say thank you, thank you to the Southern Baptist Convention for the essential and irreplaceable role you play in America,” he said. “And I’ll make you a promise: This president, this vice president and our administration will always stand with you.”

On Tuesday, the opening day of the two-day meeting of the Southern Baptist Convention, several of the more than 9,000 messengers, or delegates, rose to object to having elected officials, and Pence in particular, speak at annual meetings. 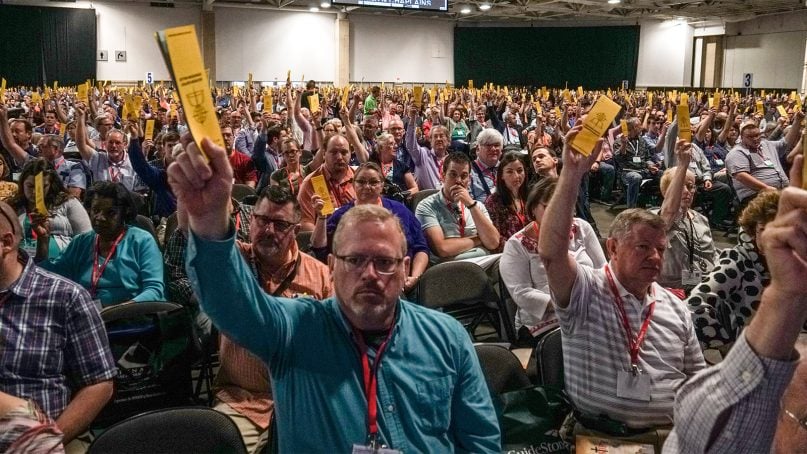 Messengers to the Southern Baptist Convention (SBC) annual meeting vote on June 12, 2018, during the meeting’s first morning session at the Kay Bailey Hutchison Convention Center in Dallas. Messengers defeated the motion to amend the agenda to replace Vice President Mike Pence’s address Wednesday with a time of prayer. Photo by Adam Covington via Baptist Press

Garrett Kell, an Alexandria, Va., pastor, suggested Pence’s time slot should be replaced with a time of prayer.

“For many years we’ve been talking about loving and listening to our minority brothers and sisters,” he said, noting that he was not speaking against Pence personally. “This invitation does nothing to suggest that we’re actually listening. Not only are many of us in this room hurt and bothered by this invitation but also many of our minority brothers and sisters will especially be hurt by this invitation and I fear that it will communicate to many of them that our political associations are more important than our association with them.”

Grant Ethridge, chairman of the meeting’s Committee on the Order of Business, responded that he, too, is concerned about outreach to minorities, having pastored a church once known as an all-white “Republican church” in predominantly black Hampton Roads, Va., but now multiethnic.

“The Southern Baptist Convention aligns itself with no political party,” he said, noting that the White House approached the SBC about a Pence speech. “Our loyalty is to King Jesus, the king of kings and the lord of lords.”

Ethridge said if he had received a similar request from President Obama’s White House, he would have welcomed him.

“As a committee we feel to not show hospitality to those in authority would be a bad testimony for Southern Baptists,” he said, in comments that immediately preceded remarks by Texas Gov. Greg Abbott to the meeting.

Kell’s request was voted down but a significant percentage of hands lifted their packet of ballots in agreement.

J.D. Greear, who was elected Tuesday as the next SBC president, told reporters that day that he believes it is important to listen to the views of messengers who want to hear Pence and those who are concerned that his addressing them will be viewed as their endorsement of the administration.

“Those are the two things that need to shape the conversation going forward — it’s empathy and charity in these kinds of things,” Greear, a North Carolina megachurch pastor, said at a news conference.

J.D. Greear, the next SBC president, speaks during the annual meeting in Dallas on June 12, 2018. RNS photo by Adelle M. Banks

But shortly after Pence’s speech, Greear tweeted a message about “a terribly mixed signal”: “We are grateful for civic leaders who want to speak to our Convention—but make no mistake about it, our identity is in the gospel and our unity is in the Great Commission. Commissioned missionaries, not political platforms, are what we do.”

Though 81 percent of white evangelicals voted for Trump and prominent Southern Baptists have been among his unofficial evangelical advisers, there are times when some evangelicals differ with the administration.

On Tuesday, Baptists adopted a statement that called for immigration reform that includes “maintaining the priority of family unity” while also emphasizing “securing our borders and providing a pathway to legal status with appropriate restitutionary measures.”

Alan Cross, a Southern Baptist minister and immigrant advocate from Alabama, said the passage of such a statement, which differs with the administration’s current policy toward undocumented immigrant families, is significant.

“Southern Baptists demonstrated that they want to follow the teachings of Jesus in how people, including vulnerable immigrant children and families, should be treated, even if that puts them at odds with political leaders and parties that they have traditionally supported,” said Cross, Southeast coordinator of Bibles, Badges and Business, a group working on immigration reform. “That is an important declaration and one that should not be taken lightly.”