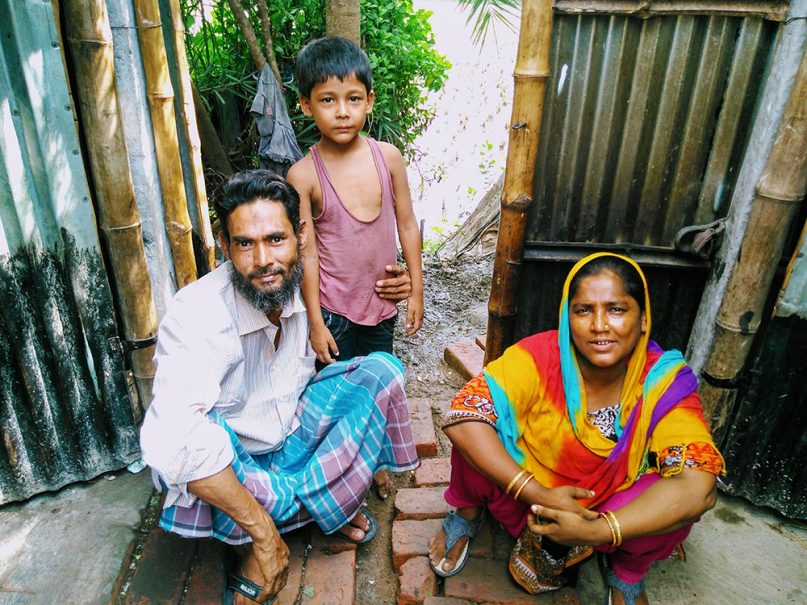 Laila Begum, right, from the Maungdaw district in Myanmar, with her husband, Siraj-ul-Islam, and son, Farhaan, at the Rohingya refugee camp in Hardaha, near Kolkata, India, on June 11, 2018. RNS photo by Priyadarshini Sen

KOLKATA (RNS) — Last year, Hasan Sharif, a 27-year-old Rohingya, observed Eid al-fitr while hiding from Myanmar soldiers in a stranger’s home. His village had been reduced to ash. “My father was arbitrarily arrested and died in custody,” he said. “Out of 74 members in my family, 34 have been killed. I had to leave or else I would be killed too.”

Sharif, a refugee from Maungdaw in western Rakhine State, some 500 miles from Kolkata, told his story as he put the final touches on a latticed window he was painting at an Islamic community center in Hardaha, a village on the outskirts of Kolkata.

This year, Sharif celebrated Eid — the holiday marking the end of Islam’s holy month of Ramadan — in Hardaha’s Rohingya settlement. The camp is ramshackle at best, but its lights burn brightly and the 50 or so refugees here enjoy unaccustomed safety. “I’ve finally reached Allah’s abode. Eid for me is finding a place I can call home,” said Sharif, who fled Myanmar last July, crossing into Bangladesh before heading west to India.

Nearly 17,500 Rohingya refugees and asylum seekers are registered with the United Nations High Commissioner for Refugees (UNHCR) in India. Most have been held in large camps near Delhi and Hyderabad, to the south. But more than 100, including Sharif, appeared in the area around Hardaha in Bengal early this year.

“The Rohingyas are poor and are able to find unskilled work in the informal job sector. It’s important they live with dignity in asylum and not face exploitation,” says Ipshita Sengupta, a policy associate at UNHCR.

Nonetheless, their arrival has alarmed some in Kolkata. Tridib Mandal, a district president of the pro-Hindu Bharatiya Janata Party, believes the Muslim Rohingyas could be linked to extremist organizations. “They should be immediately sent back to Bangladesh,” Mandal said.

For now, the Rohingyas find sanctuary in dingy accommodations around Hardaha and Shahapur, a nearby village that is also largely Muslim. The land for the small camp was donated by Hossain Gazi, a paint supplier who heads the Desh Bachao Samajik Committee, a local nongovernmental organization. He opened his property to eight families in December, after visiting Rakhine State.

“I saw villages being burnt, people getting killed. It was an unbearable sight, and I had to do something,” he said.

The camp is a picture of despair. On both sides of a brick path over a muddy tract are shanties made of beaten aluminum and held together by bamboo shafts, tarpaulin and old saris. All residents share a single toilet and bath. 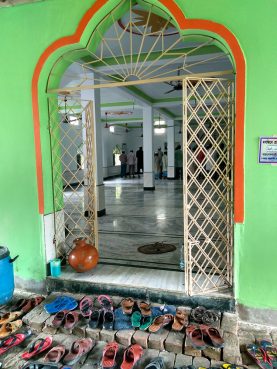 Rohingya refugees offer prayers during Ramadan at the village mosque in Hardaha on June 11, 2018, near Kolkata, India. RNS photo by Pradipta Sen

But Arif Lashkar, a 28-year-old English teacher from the Buthidaung town of Myanmar, counted his blessings. Last August, the Burmese military surrounded his family home, killing his parents and four siblings. “I was the only one who escaped. I managed to cross over to Bangladesh, and from there I fled to Delhi,” he said.

Early this year, Lashkar moved to Hardaha in search of a job. “I felt more at ease in Bengal than I did in Delhi. The language is closer to Ruaingga”— Rohingyas’ native tongue — “and the landscape reminds me of Myanmar.”

Bengal, dotted with coconut and banana trees, is lush, unlike the parched countryside around Delhi. Bengali cuisine, with its mainstays of rice and fish, is also closer to Myanmar’s.

That meant that finding the right flavors for iftar, meals eaten after sunset during Ramadan, was less of a chore.

At home, Lashkar couldn’t observe Ramadan’s schedule of frequent prayer without first obtaining permission from government authorities. “Here, I can at least perform namaz without the fear of being attacked,” he says.

But the adjustment to life in Bengal hasn’t been easy. In Myanmar, iftars were marked by plates of delicacies, and guests turned out dressed in traditional garments. “Look at what I’m wearing now,” said Lashkar, pointing to his frayed T-shirt.

“In Myanmar, if I wore shabby clothes during Eid, I would get scolded by my relatives,” he said. “But now, I don’t even have any family left.”

Still, for Lashkar, Eid holds out the possibility of forging new relationships. Fluent in three languages, he wants to make a living as a translator and English teacher for fellow Rohingyas. He also hopes to get married after Eid.

For many women refugees in Hardaha, the peace that Ramadan is supposed to bring was tempered by memories of rape, arson and arbitrary arrests that defined existence in Myanmar.

Doling out rice pudding to her children from a clay plot in her makeshift home here, Laila Begum, a 35-year-old refugee from Myanmar’s Maungdaw district, remembers how Buddhists set fire to her home in 2014. “I lost my mother and two children in an arbitrary attack. My husband and I packed whatever we had and left for Bangladesh,” she said. 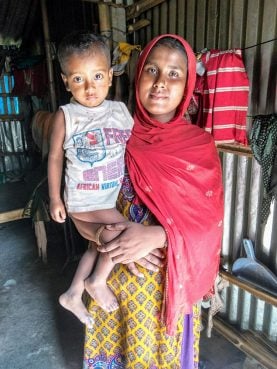 Hamidi Bibi with her three-year-old Hasan at the Rohingya refugee camp in Hardaha on June 11, 2018, near Kolkata, India. RNS photo by Priyadarshini Sen

But while observing the month’s dawn-to-dusk fasts, they made time for all-women village meetings to improve their lot.

“We want the UNHCR and the international community to take note of our condition. We want jobs, food and shelter,” said Hamidi Bibi, a 25-year-old tailor from the Rathedaung district of Rakhine State.

They have support from some political leaders who note Bengal’s shared cultural past with Rohingya Muslims.

But even some who are sympathetic to the refugees’ plight want to see them returned to Myanmar. Sujan Chakraborty, a leader of the Communist Party of India, the refugees should be given amnesty. “But it is also the responsibility of the governments of India, Bangladesh and Myanmar to facilitate their resettlement, while involving the United Nations,” he said.

But the Rohingya refugees can’t think of returning to Myanmar, despite the current deprivations. “We are God-fearing Muslims,” said Begum. “We observe Ramadan, read from the Quran, and prepare iftar meals. We are doing the same in India. What’s wrong with that? If we go back to Myanmar, we will all die.”

Back in Maungdaw, Sharif said, he had a flourishing garment business. Here, he sleeps on the floor and barely has food on his plate.

On Eid, he will pray that Allah doesn’t send them back to where Islamophobia, death and destruction are rampant.

“There’s peace here, and there’s only death there.”

Priyadarshini Sen is a freelance journalist and writer based in New Delhi, India.

News
Rohingya American voters ‘grateful,’ ‘excited’ to cast ballots for the first time in Chicago
News
Hindu nationalists see Muslim jihad everywhere in India
News
A Catholic priest takes on interfaith fight against COVID-19 in a sacred Hindu city
Opinion
Kashmir’s lockdown at one year: A region’s alienation turns to betrayal
Opinion
American Christians need to reinvent their theology and practice of missions
© Copyright 2020, Religion News Service. All rights reserved. Use of and/or registration on any portion of this site constitutes acceptance of our User Agreement and Privacy Policy, Privacy Statement and Cookie Notice. The material on this site may not be reproduced, distributed, transmitted, cached or otherwise used, except with the prior written permission of Religion News Service.