(RNS) — With the words “religious freedom” becoming ammunition in the ongoing culture wars, Catholic leaders hope a weeklong campaign titled “Serving Others in God’s Love” will shift the focus more toward essential human rights and dignity.

Religious Freedom Week is being led by the U.S. Conference of Catholic Bishops and begins on Friday (June 22), the feast day for Thomas More and John Fisher, the 16th-century Catholics martyred for their opposition to King Henry VIII’s split from Rome. The effort was previously a 14-day campaign known as “Fortnight for Freedom” but was shortened, a spokeswoman said, to “provide a more focused period to concentrate attention on this issue.”

The campaign includes support for the federal Child Welfare Provider Inclusion Act (H.R. 1881/S. 811), which the church said “would protect the religious liberty of child welfare service providers, including adoption and foster care agencies.” Opponents say it would allow discrimination, particularly against prospective adoptive and foster parents who are LGBT. Both versions of the bill have languished in subcommittees since 2017.

Catholic leaders will also draw attention to religious freedom crises around the world, officials said, as well as to their ability to provide services to undocumented immigrants.

According to Hillary Byrnes, USCCB associate general counsel, “There’s just (several) issues on both the right and the left we would advocate for religious freedom no matter who is in government.”

The head of the USCCB’s Committee for Religious Liberty emphasized that Catholic organizations need to remain free to provide social services.

“Religious freedom allows the space for people of faith to serve others in God’s love in ministries like education, adoption and foster care, health care and migration and refugee services,” Archbishop Joseph E. Kurtz said in a statement.

“We encourage people of faith to reflect on the importance of religious freedom so that we might have the space to carry out our mission of service and mercy, and we invite everyone to pray for our brothers and sisters who face intense persecution in other parts of the world,” said Kurtz. 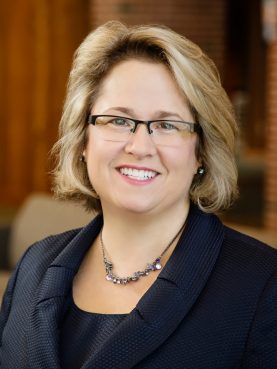 That approach impressed Robin Fretwell Wilson, a University of Illinois College of Law professor who directs its Family Law and Policy Program. A veteran observer of religious liberty issues, Wilson said that faith communities such as the Catholic Church seek to express their identity in much the same way other groups have sought.

The Catholics, she said, are “asking to be in the public square as who they are — which is what gay people are asking (for).”

Wilson said Catholic leaders have realized the shift by states and the Supreme Court on marriage present challenges to their desire to serve. Her new book, “The Contested Place of Religion in Family Law” (Cambridge University Press), deals with a range of issues, including faith-based adoption agencies and marriage equality questions.

“What I’ve been seeing in the last couple of years in doing this book, talking with bishops, talking about their own identity and needs in a very human way — it’s much like the gay community (has) been doing for a very long time,” Wilson said. “Religious folks have caught up and figured out they need to tell people who they are.”

Byrnes echoed Wilson’s analysis: “We all have to realize people of faith deserve a place in a pluralistic society. I think people deserve to be recognized and not discriminated against by the government, whether it’s immigration issues or adoption or foster care issues. People deserve to have the freedom to serve all people regardless of their status in life. I believe we need to have the space to serve our neighbors under what the gospel would ask us to do.”

Byrnes, a former civil rights attorney for the U.S. Department of Justice, said the refocused Religious Freedom Week aims at lowering the temperature surrounding the role of faith-based service providers in a polarized national moment.

“Our society now is maybe more litigious than it was in the past,” Byrnes said. “We’ve certainly seen (growing) polarization in our society. So I think the church has a role in trying to bridge that gap between people.”

She added, “It goes beyond just the religious freedom issues into … the root cause of polarization in our society. And getting away from people just being individualistic, but realizing we all need each other as a community.”

Wilson noted that Catholic adoption agencies have closed their doors when unable to get carve-outs from mandates involving same-sex couples in Illinois, the District of Columbia and Massachusetts, depriving communities of much-needed services.

“These guys don’t have to do the good in the world that they do,” Wilson said. “The challenge for lawmakers is how to give them the space in which to work. It’s not just freedom to serve, but a sense of security, that when they open to the world, it doesn’t become a device for the world to change them from the inside out.”

Wilson said the departure of the Catholic and larger faith-based community from social services could have devastating consequences for many Americans.

“One in 6 patient beds in America are run by Catholic hospitals,” she said. “We have to leave them the room to do that work. We cannot take a systemic blow of Catholics walking away from health care in America.”

(Mark A. Kellner is a freelance journalist in Salt Lake City, where he previously served as an enterprise reporter at the Deseret News.)