NAIROBI, Kenya (RNS) — Christians who convert to Islam in East African countries often become targets for recruitment by extremist groups such as the Islamic State and al-Shabab, the al-Qaida affiliate in East Africa.

Such is one finding in a June report from PeaceTech Lab, a Washington, D.C., nonprofit that works to reduce violent conflict using technology. The report comes at a time when governments and religious leaders in East Africa are increasingly concerned about Islamic radicalization in a region that includes Somalia and the Kenyan coast.

The finding is based on research conducted from May to July 2017 examining how violent extremist groups use hate speech on social media and online messaging to recruit youth. The 100 participants came from various backgrounds, including ranks of the unemployed, as well as students and mosque attendees. Survey questions probed participants’ relationship to hate speech and social media habits.

“Efforts to counter violent extremist recruitment have to start with an understanding of the narratives and terminology driving radicalization,” said Caleb Gichuhi, a senior specialist at PeaceTech Lab. “When we understand how recruitment unfolds, we can develop alternatives.”

Conducted in the coastal city of Mombasa, Kenya, the research focused on community and individual resilience to violent extremism. Mombasa has a history of extremist activity, including bombings by suspected al-Shabab militants, recruitment of thousands of Kenyan youth for battle in Somalia and radicalization under extremist teaching.

According to the report, family and friends cut ties with Christian converts to Islam when they learn of the conversion. ​As a result, converts become isolated and vulnerable to being manipulated by extremists disposed to using violent tactics.

​The report, which looks at correlations between speech patterns and violent extremism, found that many Kenyans switch religions as they pursue employment opportunities in which religious affiliation makes a difference. They also switch for marriage and the desire to blend in with neighbors when they move to a new region.

Wilybard Lagho, vicar general of the Roman Catholic Archdiocese of Mombasa, said some former Christians do not want to convert to Islam but do so under duress.

“Where coercion has been used, the person’s faith tends to be shallow,” said Lagho.

Lambert Mbela, a pastor at Redeemed Gospel Church in Mombasa, said conversions from Christianity to Islam are rare in the coastal region except in extreme circumstances.

“We have heard that some have converted to receive food in periods of drought but have taken the food and failed to convert,” said Mbela.

The report says al-Shabab is recruiting not only Somalis living in Kenya but also Kenyan Muslims. ​The recruitment process often begins with disseminating an extremist preacher’s message via social media. Further indoctrination comes through CDs and mosque lectures.

Mbela said economically desperate youth have been lured by extremist groups through false offers of high-paying jobs. He’s learned about the process from young Christian men who have been approached by recruiters.

“They come to discover they have been recruited later,” said Mbela. “Coercion is widely employed, and the radicalized youth believe they have no other choice in life. This is very secretive, and those who have undergone it do not want to come out or give details.”

Some coastal Muslim leaders are skeptical of the PeaceTech Lab findings. While recent converts might be recruited on occasion, they said, the numbers have been small.

“I think these are just perceptions,” said Sheikh Ahmed Mundhar, a former chief religious judge in Mombasa’s Islamic courts. “Some groups talk about it, but we have been challenging them to provide some statistics. I think the numbers are too few.”

Ismael Okwany, a former Pentecostal bishop who converted to Islam and turned his Kenyan church into a mosque in 2017, said recruitment by extremist groups isn’t about religious identity.

“Joining the extremist groups has nothing to do with true religion and God,” said Okwany. “I believe those who join the groups have criminal minds. Both Christian and Muslims are being recruited.”

(Fredrick Nzwili is an RNS correspondent based in Nairobi, Kenya.) 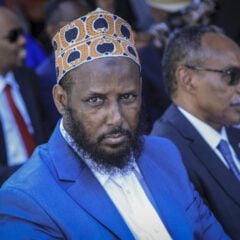