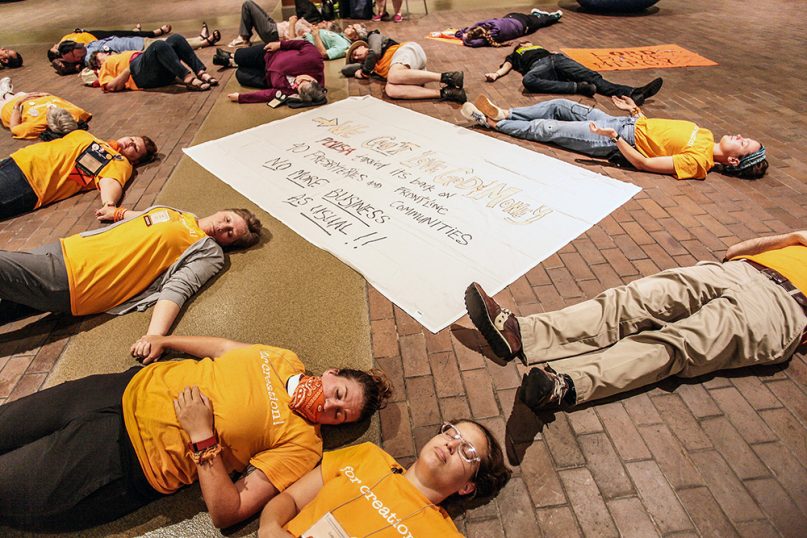 Friends of Fossil Free PCUSA symbolically portray deaths over the next two years in protest of General Assembly 223 voting to not immediately divest from the fossil fuel industry on June 22, 2018, in St. Louis. Photo by Danny Bolin/PC(USA)

(RNS) — For the third time in a row, the Presbyterian Church (USA)’s General Assembly decided against divesting from companies invested in fossil fuels.

Instead, delegates passed a resolution at the biennial meeting of the PCUSA last week in St. Louis asking the denomination’s Mission Responsibility Through Investment committee to continue engagement with corporations that produce or heavily consume fossil fuels.

It was “the most powerful result that could come out of this assembly,” said Rob Fohr, the PCUSA’s director of faith-based investing and corporate engagement.

That’s because the resolution also included guidelines for measuring companies’ progress that could lead to selective divestment at the 2020 General Assembly. And the denomination recently joined a five-year initiative called Climate Action 100+ led by investors to pressure companies to cut greenhouse gas emissions and improve financial disclosures and governance related to climate change, Fohr said. That gives them clear goals to measure companies’ progress and more leverage as part of a coalition with almost $30 trillion in investments.

The denomination has about $150 million invested in companies regarded as large producers and consumers of fossil fuels.

Divesting from fossil fuels has been a hot topic at the past two meetings, with the 2016 assembly similarly voting to continue to engage energy companies for at least two more years. Steven Webb, co-chair of the Advisory Committee on Social Witness Policy for the General Assembly, said beforehand the denomination has seen some movement away from fossil fuels from companies in that time.

For example, Fohr said, companies are beginning to disclose the risks of climate change as a result of pressure from investors, including Exxon Mobil, Marathon Petroleum, Noble Energy and Occidental Petroleum.

But that’s not enough for members of Fossil Free PCUSA and others. About 35 people walked all or part of the 260 miles between the mainline Protestant denomination’s headquarters in Louisville, Ky., and the assembly in St. Louis, hoping to persuade the 1.4 million-member denomination to divest.

After the vote, about 20 members of the group staged a “die-in” at the assembly, lying on the stone floor of the America’s Center Convention Complex outside the plenary where the vote had taken place, symbolizing lives lost to climate change caused by fossil fuel dependence.

The Rev. Abby Mohaupt, moderator of Fossil Free PCUSA, said she was angry and disappointed that, with its vote, the General Assembly was “really saying that as a denomination we’re going to continue to engage with people who are causing so much suffering instead of standing in solidarity with people who are experiencing climate change.” But she also left feeling hopeful because of the number of people who were supporting the movement.

Delegates also approved a resolution (called an “overture” at the General Assembly) opposing anti-BDS (Boycott, Divestment, Sanctions) legislation by Congress and state governments. It pointed to Senate Bill 720 and House Resolution 1697, which it says “seek to impose civil and criminal penalties for nonviolent BDS resistance against human rights violations in Israel and Palestine.”

It was one of several resolutions regarding Israel and the occupied Palestinian territories adopted at the General Assembly. 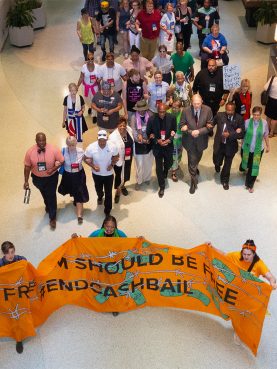 Four years ago, delegates to General Assembly narrowly voted to divest church funds from three American companies it said were profiting from the oppression of Palestinians within Israel’s occupied territories.

And they were met with some pushback. The American Jewish Committee did not attend the assembly this year as it has in years past. Rabbi Noam Marans, AJC director of interreligious and intergroup relations, issued a written statement afterward, calling the denomination “obsessively critical of Israel in its national utterances.”

The Rev. J. Herbert Nelson II, the assembly’s stated clerk, also issued a statement in the assembly’s daily newsletter in response to a reported threat made to a speaker following a meeting of its Middle East Issues committee.

“Presbyterians tend to have strong feelings about public issues and, in the case of the search for peace in the Middle East, that exposes the General Assembly to strong, divergent opinions,” Nelson wrote.

“Sometimes that exposes us to the existential passion of people embedded in the struggle, who have been invited to provide information and advice to the assembly committees. When that passion boils over, we have to deal with the results.”

Other actions taken by the General Assembly include:

For many, the highlight of the assembly wasn’t the resolutions, but a march Tuesday (June 19) to the City Justice Center, where delegates donating the offering collected at their opening worship service to bail out about three dozen people incarcerated for minor offenses, according to the Rev. Jerry Van Marter, interim director of communications for the Office of the General Assembly.