The Rev. Paul Ogalo raps at St. Monica Catholic Church in western Kenya on May 6, 2018. His style of preaching, using secular music, drama and dance, is popular with youth. Ogalo raps about how youth can fight social vices such as drug abuse, crime and HIV/AIDS. RNS photo by Tonny Onyulo
June 29, 2018
Tonny Onyulo

NAIROBI, Kenya (RNS) – The sun shone brightly on a recent Sunday morning over St. Monica Catholic Church in Rapogi, a village in western Kenya. The house of worship was packed wall to wall. The choir’s singing filled the nave. Everyone waited for their favorite priest to show up.

Soon, the Rev. Paul Ogalo appeared in the pulpit dressed in flowing white robes and began to preach.

“God is great and through him we can defeat drug abuse, food insecurity, diseases and environmental issues,” he declared amid cheers. “We should all come together as youths and discuss activities that benefit the society.”

It seemed like a normal Mass in Kenya, where worship can border on the boisterous.

But after the sermon, Ogalo, 45, transformed the venue into a concert space. He changed out of his vestments into black shorts and a white shirt and began to rap, pacing around the pulpit with a microphone at hand.

“Yeah! Yeah! Please come to Jesus, all who labor and are heavy laden, and I will give you rest. Youths come to Jesus, youths come Jesus, ah!” he rapped as his audience, which included youth, elders and nuns, went wild.

Ogalo is an ordained Catholic priest who uses rap to spread the gospel. But his methods are controversial. Bishop Philip Anyolo, chairman of the Kenya Conference of Catholic Bishops, said that as of June 18, Ogalo had been suspended from celebrating public Mass for one year. During that time, he can celebrate Mass privately but not conduct regular services.

“Rap music is not part of our liturgy. People come to church for worship,” Anyolo said. “He can do the rap outside but not during the liturgy Mass. He is a man who was ordained to be priest and offer leadership and worship for the people, not drama." Anyolo said that during the year, Ogalo can "examine himself and come back reformed.”

A priest in Homa Bay who requested anonymity supported the suspension. “We cannot turn our churches into social gathering(s) where people dance and entertain themselves," he said. "We should respect the house of God." 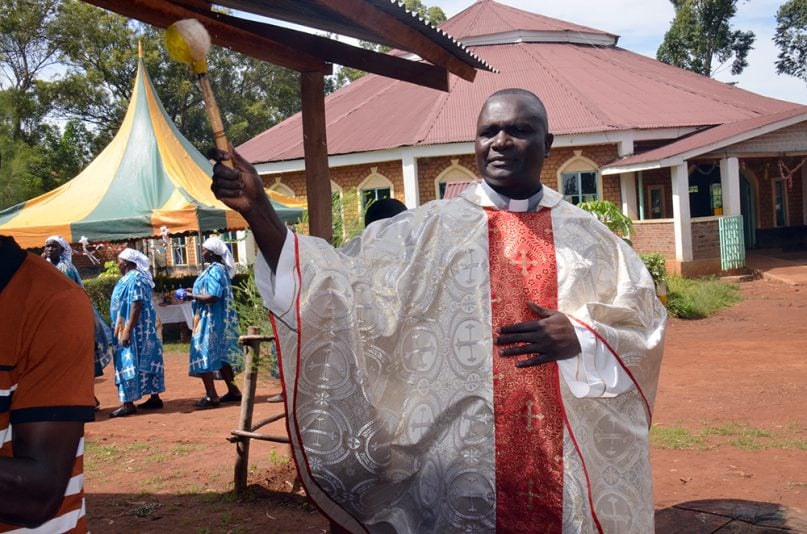 But Ogalo said Catholic doctrine does not oppose rap or any other style of music or dance to preach the gospel. He said he changed his way of preaching in 2007 after several youth, including one from Rapogi, died in a stampede at a concert in Nairobi. They had gone to seek entertainment that they could have found in church.

“I’m not doing anything wrong because the church doctrines do not oppose the use of music to preach the gospel to the youths,” he said. “I began to rap so that I could reach many youths with the gospel of Jesus Christ.”

A recent survey on alcohol and drug abuse conducted by Kenya's National Authority for the Campaign against Alcohol and Drug Abuse showed a high use of drugs and alcohol among schoolchildren.

Ogalo said his preaching style will help eliminate such vices. His rapping is drawing more youth to join the church. That, in turn, will have a positive impact for society, he said.

His style of preaching has certainly excited many Catholics throughout Kenya.

The congregants at St. Monica call him "Father Masaa" while youths and others across the country call him Paul S.W.I.T., meaning “Paul Sees the World in Turmoil.” When Ogalo oversaw services, hundreds of youths filled the church while others stood outside the church, trying to catch a glimpse through the windows.

“I really love the way he preaches. He has changed my life forever,” said Joel Odis, 23, a recovering drug addict. “He uses the language the youths understand. When I met him, he advised me to stop taking alcohol and drugs and engage in activities that build my future.”

Dickson Onyango, 30, another member of St. Monica, thought the suspension was a shame.

“I can’t miss a Mass service if Father Paul Ogalo is leading the Mass,” Onyango said. “He makes the service entertaining and you can’t sleep in church. He is the person we need as youths.

“He’s using rap music to reach out to the millions of youths and also to educate people on the importance of conserving the environment through tree planting and need to embrace farming,” said Onyango.