(RNS) — A pigeon, a baby and “Flat Jesus” walked into a convention center.

As the Episcopal Church’s 79th General Convention ends on Friday (July 13) at the Austin Convention Center, many attendees and those following on the internet will remember the nine-day meeting as much for the parody Twitter accounts, hashtags and other memes as for the resolutions that passed.

One of the breakout internet stars of the convention was a pigeon that got into the hall. “Episcobaby” found fame celebrating the convention’s hospitality toward infants and women (and by being cute). Even Harry Potter made an appearance. 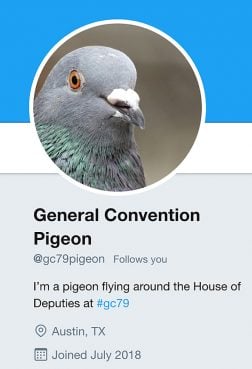 It’s not that bishops and deputies haven’t taken their duties seriously, said the Rev. Paul Castelli, the first clergy alternate from the Diocese of Michigan and creator of the Episcobaby Twitter account. The convention discussed revising the denomination’s Book of Common Prayer and altering rules related to weddings for same-sex couples. Attendees also prayed outside a detention center in solidarity with immigrants affected by Trump administration policies.

“There’s a lot of tension at General Convention. It’s hard,” Castelli said. “To have goofy, dumb, cute things takes a break from the vitriol on social media around this stuff and gives you something to smile about.”

It’s not the first year bishops, deputies and convention watchers have played as they worked at their triennial General Convention.

In 2012 in Indianapolis, several deputies came up with the game of Bonnie Ball, named for then-House of Deputies President Bonnie Anderson. The game awarded points to speakers for using particular words and phrases, wearing hats and other behavior, which the self-appointed umpires kept secret until the winner was announced at the end of the meeting.

Laminated paper cutouts known as Flat Jesus, which were decorated and distributed by youth and young adults from the Diocese of Michigan, have appeared at several conventions, including this year’s, as well as in a number of tweets.

Those who indulge in the memes say the humor reminds them why they feel passionately about the issues being decided: They love the Episcopal Church, and they all are part of the same church, not just opposing sides in a debate.

After all, who doesn’t crack a smile at a picture of a cute baby on the internet?

Here’s more about three of the most popular memes at the convention:

The General Convention Pigeon, who one Twitter user dubbed Steve, has visited booths in the exhibition hall and landed at one of the microphones during one session of the House of Deputies. Though it didn’t speak, the pigeon did work his way into Bishop Michael Curry’s sermon at the convention revival, who said, “We’re basically like that pigeon in the House of Deputies.”

With the help of anonymous humans, the General Convention Pigeon also started his own Twitter handle, @GC79Pigeon, quickly gaining more than 800 followers.

The pigeon, through one of those anonymous humans, even communicated to Religion News Service, saying, “It helps us all step back and laugh and, at the end of the day, do our work better.”

All of them. We are legion and we are one. https://t.co/fkGVImVhcr

@HODPlatform There is a deputy who wishes to speak at microphone 2. pic.twitter.com/FxatNSymaJ

And a pigeon shall lead them… Feeling a bit like @gc79pigeon is the one thing that will bring us all together. #gc79 #episcopal

"The house will come to order, as will the pigeon," is a thing @gaycjen just said. #GC79

This is Castelli’s third General Convention, but his first as a new dad. On the first day of the conference, he and his wife, Mechelle Sieglitz, created the @Episcobaby Twitter account for their daughter, Aria, asking, “Where are my other Episcobabies at?”

He thought he’d post a few funny tweets from Episcobaby to “lighten the mood.” The most popular, Castelli noted, also were pointed.

One happy photo was accompanied by the words “@episcobaby is pleased” after a question about bringing nursing babies onto the floor of the House of Deputies earlier in the convention was resolved. A resolution unanimously passed Wednesday that clarified that all children under 1 are allowed onto the floor with their parents, as well as older children while they are nursed or bottle-fed.

The incredible women at #gc79 are making me feel immensely hopeful about my future in the #Church. I hope to be like them someday. Thank you for working so hard to make #TEC a #SafeChurchForWomenAndGirls, where we can not only survive but thrive. #WhenWomenLeadAmazingThingsHappen pic.twitter.com/00Oi5ONcrw

Saving the church from heresy, one cuddle at a time #gc79 pic.twitter.com/CrCCItl0Z8

I was just baptized using the ‘79 Prayer Book less than a month ago. Come on! #gc79

There’s no deep, theological meaning behind the hashtag #GC79andthreequarters, according to its creator, Chris Corbin, communications director for the Diocese of South Dakota.

Following along with the General Convention online, Corbin entertained himself by mashing up the convention’s official hashtag — #GC79 — with the name of the fictional train platform from which witches and wizards board their train to Hogwarts in J.K. Rowling’s “Harry Potter” series. Under the hashtag #GC79andthreequarters, he began tweeting posts that mixed references from the beloved children’s series with the proceedings in Austin.

Soon, Corbin said, “it morphed into this way to for me to follow” the news coming out of the convention.

During the sometimes heated discussion on the prayer book revision, he lightheartedly portrayed two Harry Potter characters, Lucius Malfoy and Gilderoy Lockhart, on opposite sides of the issue.

I have procured an exclusive interview with DEPO supporter Lucius Malfoy, who argues that the resolution preserves the peace betwen wizarding traditionalists and progressives by allowing wide latitude about exclusion of muggle-borns from the use of magic. #GC79andthreequarters pic.twitter.com/oBRDOAh0R0

But here’s Gilderoy Lockhart for full revision. He claims the current Spellbook speaks too much about magic and doesn’t reflect how spectacular he is. He claims most Hogwarts students support full revision, although none of them remember saying this. #GC79andthreequarters #GC79 pic.twitter.com/CNjJW0fzUp

You wouldn’t happen to have books like this, would you? #GC79 #GC79andthreequarters pic.twitter.com/Qp5XLH5gGL

“Some of the tweets have related to policy positions — doing it with a little levity, sometimes we can say we’re still part of the body of Christ together,” Corbin said.

“The end goal is building up the kingdom of God, not our side winning in a certain debate.”