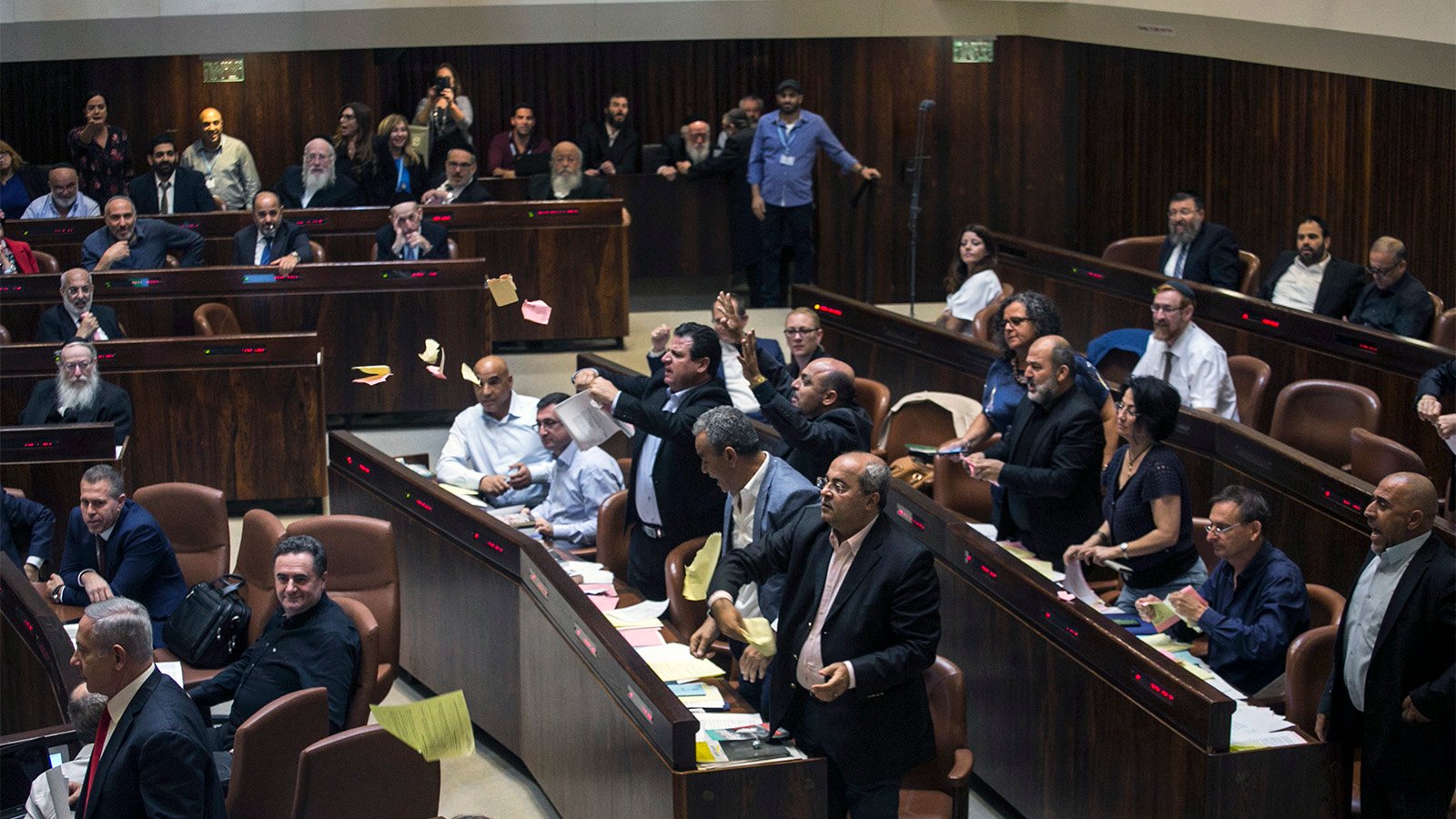 Arab lawmakers stand in protest during a Knesset session in Jerusalem on July 19, 2018. Israel's parliament approved controversial legislation on Thursday that defines the country as the nation-state of the Jewish people but which critics warn sidelines minorities. (AP Photo/Olivier Fitoussi)
July 19, 2018
G. Jeffrey MacDonald

JERUSALEM (RNS) — In the wee hours of Thursday (July 19), Israel’s parliament, the Knesset, passed a controversial nation-state law that explicitly defines Israel as the “national home of the Jewish people.”

The law passed 62-55 during a heated session that revealed deep divisions within Israeli society over the religious and democratic character of what many have long called the Jewish state.

First introduced in 2011 and amended many times before being approved, the law states that Jerusalem is Israel’s “united” capital. It also recognizes the Jewish Shabbat as the official day of rest while allowing non-Jews to observe their own Sabbath. Independence Day is now an official holiday, and Holocaust Remembrance Day and Memorial Day are recognized as days of mourning.

The law also codifies the parameters of long-used national symbols such as the Israeli flag and the menorah, the use of both the Jewish and Gregorian calendars and Israel’s relationship with diaspora Jews.

While much of the law merely cements day-to-day practices of life in Israel, it also breaks new and controversial ground.

It states that the Jewish people "have an exclusive right to national self-determination" in the country and makes Hebrew the only official language. Arabic will have “special” status but will no longer be an official language.

The clause on self-determination underscores Israel’s vow to never allow Palestinian descendants of refugees the ability to settle en masse. A large influx of non-Jews could eventually make Jews a minority in their own country, government officials say.

Hours before the final vote, lawmakers deleted a clause that would have authorized the creation of communities “composed of people having the same faith and nationality to the exclusive character of that community.”

Instead, it says, “The state views the development of Jewish settlement as a national value and will act to encourage and promote its establishment and consolidation.”

Some believe the clause is discriminatory because it appears to promote the building of Jewish communities, but not necessarily West Bank settlements, at the expense of non-Jewish communities.

Supporters of the nation-state law said it merely recognizes the Jewish character of Israel, the only country in the world with a Jewish majority, and is a rebuke to the many countries and institutions — from the Iranian regime to UNESCO — that claim Jews are colonial invaders with no religious or historical ties to ancient or modern Israel.

"We engraved in the stone of law our language, our anthem and our flag. We have enshrined the fact that Israel is the nation-state of the Jewish people. Long live the state of Israel," Prime Minister Benjamin Netanyahu said after the law’s passage.

“While the democratic State of Israel facilitates freedom of religion and affords people of various backgrounds the right to visit and reside there, the reality is that Israel is inherently a Jewish state and affirming that fact does not contravene the liberties that it benevolently bestows to individuals of other faiths,” the group said in a statement.

Critics of the law say it fails to address democratic concerns and therefore discriminates against Israeli minority groups, including the country’s Arab community, which composes 21 percent of the population.

Palestinian negotiator Saeb Erekat tweeted from a Palestine Liberation Organization account that the law “officially legalizes apartheid and legally defines Israel as an apartheid system. … It denies the Arab citizens their right to self-determination to instead be determined by the Jewish population.”

Many Jews in Israel and abroad also criticized the law.

T’ruah, the Rabbinic Call for Human Rights, said in a statement that the law “endangers Israeli democracy, legalizes discrimination against 20 percent of Israeli citizens, threatens religious pluralism and threatens the very future of Israel.”

The American Jewish Committee said it is “deeply disappointed” by the law, first because it “downgrades” Arabic and second because it promotes “Jewish settlement.”

The latter “could be read as a euphemism for the originally proposed endorsement of support for Jewish-only communities in Israel,” AJC said.

“We respectfully ask the Government of Israel to clarify these and other questionable elements of the bill, and to reaffirm the core principles and values that make up the very foundation of Israel’s vibrant and admired democracy,” AJC said.

September 3, 2020
Related Posts
By Yonat Shimron
Ruth Bader Ginsburg, who died Friday, was shaped by her minority faith
By Jack Jenkins
Trump campaign launches new Jewish outreach coalition
By Michele Chabin
Second coronavirus lockdown in Israel frustrates many religious Jews’ plans for High Holidays
By Jeffrey Salkin
COVID has led us all into sin
By Jack Jenkins
Poll: Biden bests Trump with Jewish voters on every issue but may have lost ground overall