NAIROBI, Kenya (RNS) – Eritrean Christians and human rights advocates are cheering the release of 35 Christian prisoners as a new peace pact between Eritrea and Ethiopia takes hold this month. But hundreds remain imprisoned in Eritrea under harsh conditions stemming from a war in which members of Christian sects were targeted for mass incarceration.

For the last two decades, Eritrean authorities have persecuted religious groups, frequently arresting church leaders and detaining them in small shipping container prisons where advocates say they’re routinely deprived of water, food, proper sanitation and medicines. The roundup traces to a 2002 law that permits the operation of only a handful of religious groups: Orthodox Christian, Evangelical Lutheran and Roman Catholic churches, along with Sunni Islam.

Since then, the government has cracked down on evangelical and Pentecostal churches, which are seen as foreign-influenced threats to security and Eritrean autonomy. Seen as relative newcomers to the religious landscape, they’re accused of using aggressive evangelistic tactics and causing social divisions.

At least 10 prisons around the country are holding hundreds of prisoners who have been detained for anywhere from a few months to 20 years, according to Release Eritrea, a U.K. charity that highlights Christian persecution in the country. Among them is the former Patriarch of Eritrea Orthodox Church, Abune Antonios, who is in his 80s and has been under house arrest and incommunicado since 2007. He was deposed after complaining about the government’s interference with the church.

“We call for them all to be released,” said Berhane Asmelash, the director of Release Eritrea, in a statement in which he thanked God for the release of the prisoners.

The released prisoners — 11 women and 24 men – are not leaders of their respective groups and fellowships and were released on unclear bail terms. They pledged not to take part in worship practices of banned religious sects.

The release has drawn some praise, but it has been seen as a drop in the ocean of the crisis. Hundreds of Christians are locked up in both military detentions and ordinary prisons. According to Open Doors, an international anti-persecution organization, the country is believed to be holding between 1,200 and 3,000 people on religious grounds. Some human rights activists say it is difficult to establish the exact number because every army unit has its own prison.

On July 9,  Ethiopian Prime Minister Abiy Ahmed and Eritrean President Isaias Afwerki signed a peace agreement, bringing to an end one of Africa’s long-running conflicts. Afwerki had used the situation to justify his regime’s crackdown, which has continued to view members of some Christian sects as foreign spies. 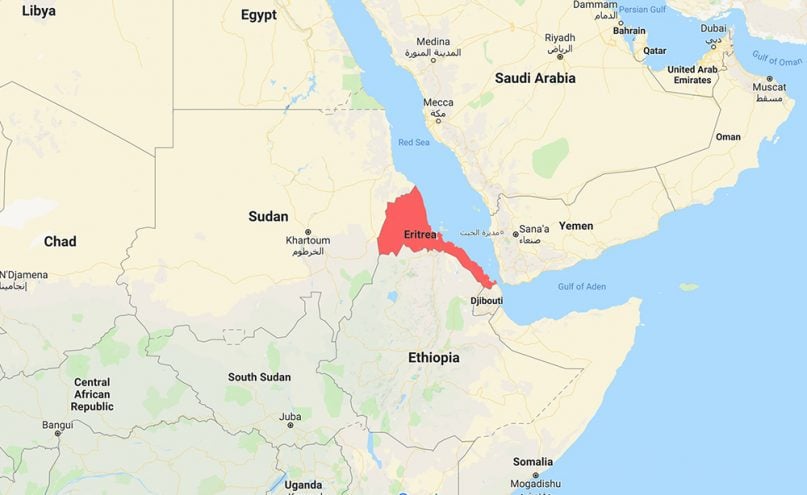 Eritrea, highlighted in red, is a small coastal nation north of Ethiopia in the Horn of Africa. Map courtesy of Google

Eritrea, a Horn of Africa country with a population of about 5 million, gained independence from Ethiopia in 1993 after a two-decade war. However, disputes over the border sparked a full-blown war from 1998-2000 that killed an estimated 80,000 people. A U.N. deal in 2000 ended the fighting and in 2002 a border commission gave the disputed land to Eritrea. Ethiopia rejected the verdict, which led to 16 years of tension, including periods of open conflict, until this month, when Ethiopia said it would accept the U.N. deal.

Church leaders have been happy about the agreement, which they hope will free the church in Eritrea, end the top leader’s security fears and open up the country again to the world.

“This peace agreement is a gift from God,” said the Rev. Mussie Zerai, an Eritrea Roman Catholic priest who runs a hotline for distressed Eritrean migrants as they flee to Europe via boat in the Mediterranean Sea. When migrant vessels encounter trouble, he calls in GPS coordinates for European rescue vessels.

In Eritrea, Afwerki’s government has closed borders, forced out foreign missionaries and nongovernmental organizations and shut down churches. According to the Rev. Abraham Hailu, an Ethiopian Roman Catholic priest who hails from near the Eritrean border and now serves in Sudan, Eritrea’s ban on foreign missionaries has made it difficult for the world to follow events in the country, despite mounting allegations of widespread human rights abuses.

At the same time, Hailu said, there are signs the situation is changing for the better.

“We see hope. With the agreement, we hope Eritrea will follow the steps of Ethiopia and release more of its prisoners,” he said.