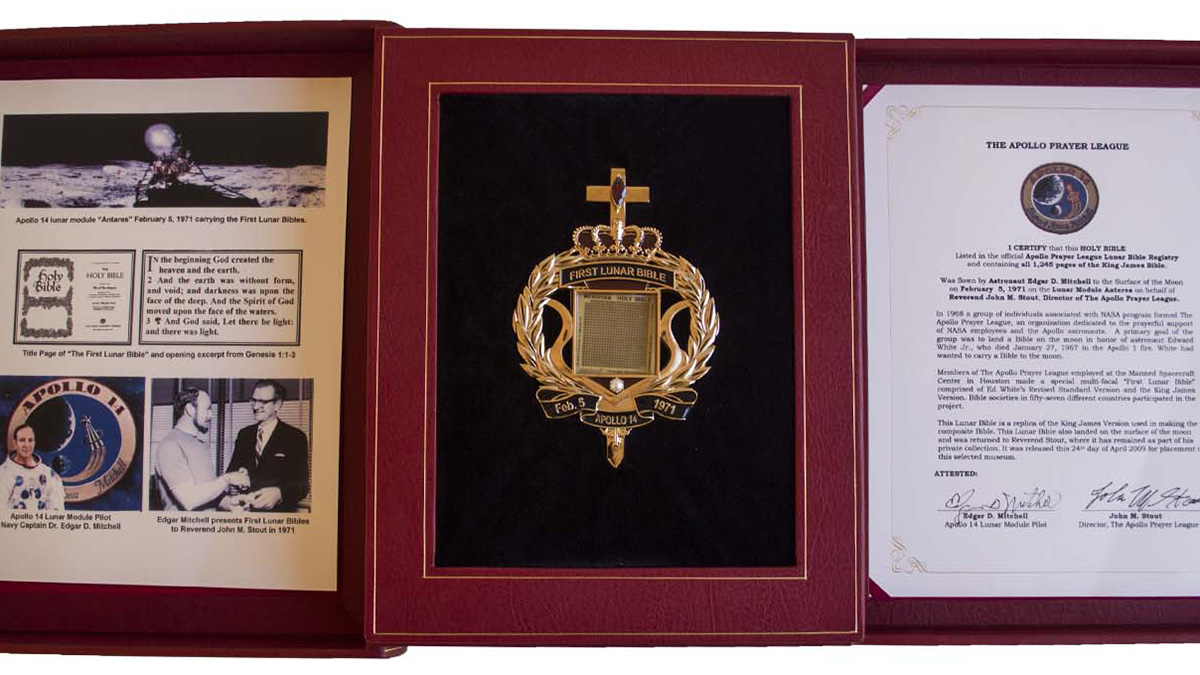 (RNS) — For the collector who has almost everything, there’s a chance this week to claim ownership of a Bible that literally was out of this world.

A Los Angeles auction firm is taking bids on a microform, or photographically reduced, King James Bible that went to the moon on the 1971 Apollo 14 space flight. Similar in appearance to a piece of microfilm, the microform is certified as containing the entire biblical text. Its print is so small that one needs a microscope to read it.

The tiny, space-traveling Bible was one of 11 that left Earth's atmosphere in the care of landing module commander Edgar Mitchell, who died in 2016 on the eve of the 45th anniversary of that lunar landing. He carried them in a container for personal items. A print Bible would have been too heavy for a space mission, but the lightweight versions posed no obstacle.

Minimum bid for the rarity is $50,000, according to the Nate D. Sanders auction firm, which will close bidding at 5 p.m. Pacific time on Thursday (July 26). 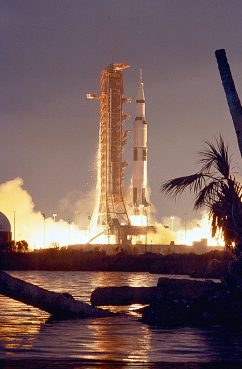 According to auction house spokesman Sam Heller, a similar lunar Bible flew along for the famously aborted Apollo 13 mission of 1970, in which mechanical malfunctions forced astronauts back to Earth under hardship conditions. That Bible sold for $62,500 last year despite never having reached the moon. Heller said the firm wouldn’t guess at a final bid for this latest item, which is being offered on consignment by an unnamed collector.

Mitchell's lunar Bible was the creation of a group known as the Apollo Prayer League, according to the auction house. John Stout, a NASA information scientist and an ordained pastor, started the league after the 1967 launchpad deaths of Apollo 1 astronauts Gus Grissom, Edward White II and Roger Chaffee. Stout was close to White and they often prayed together. Knowing that White wanted to carry a Bible to the moon, Stout devised the microform version as a way to fulfill White’s vision.

Mitchell's Bible-carrying mission wasn't the first time religious paraphernalia had reached the lunar surface. Apollo 11 astronaut Edwin "Buzz" Aldrin, an elder at Webster Presbyterian Church in Houston, brought with him a small piece of bread and miniature chalice. With holy elements in hand, he took Communion on the moon on Sunday, July 20, 1969.

The so-called lunar Bible measures 1.625 inches square. It is centered in a gold and enamel setting measuring 4 inches by 6 inches.

The chance to own it could be tempting for a Bible collector with deep pockets, according to R. Michael Kuykendall, a New Testament studies professor at Gateway Seminary in Vancouver, Wash., and chief editor of the International Society of Bible Collectors’ Bible Review Journal.

“It has a place in Bible collecting,” he said of the lunar Bible. “That’s publicity. That’s an interest.”

While many of his group’s members focus on finding the best-preserved editions of older volumes such as the 16th-century Geneva Bible, there are those interested in finding more “esoteric” editions, such as the moon-landed microform Bible.

“There’s nothing else that would compare to that,” Kuykendall said. However, the $50,000 price tag might put off some buyers.

Heller suggested a museum might also be interested in the space-launched Bible. The recently opened Museum of the Bible in Washington, D.C., already has one of the Apollo 14 lunar Bibles. The museum tweeted out a video Tuesday documenting the historic item.