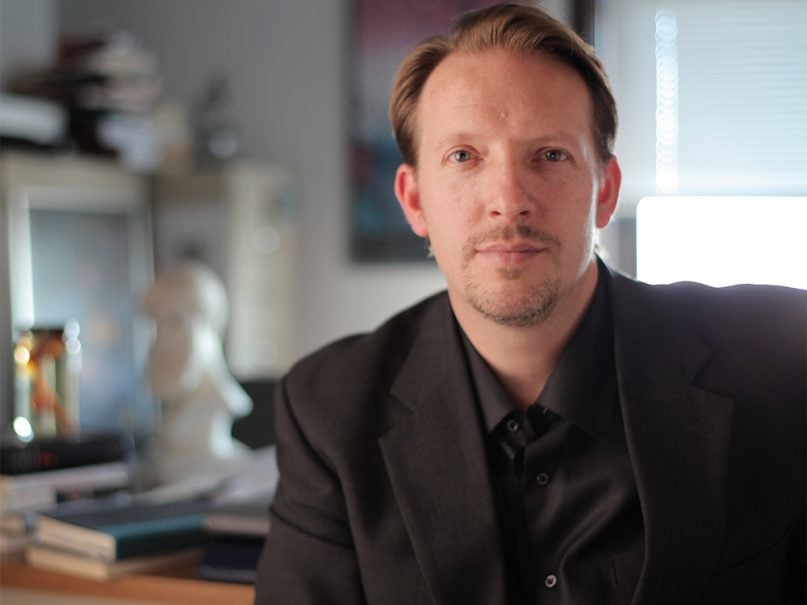 CHICAGO (RNS) — Stephen Asma plays life like he plays jazz – riffing on a theme, taking up a thread of an idea, then going further, leaning in to improvisation, which means saying “yes … and … ” to whatever comes in the door.

At Columbia College in Chicago, where he’s taught philosophy for nearly 20 years, the door stays open to his small sunny office. He has a ninth-floor view of Lake Michigan and a schedule so busy he sometimes forgets to look out the window.

The office is just a block from Buddy Guy’s Legends, the blues club where he played in the house band after working his way to a doctorate playing gigs and touring with a blues group on bills with Guy, Bo Diddley and B.B. King. Asma quit the band when teaching and traveling and writing – 10 books now and counting – overtook his time, but he still plays with friends and his teenage son. 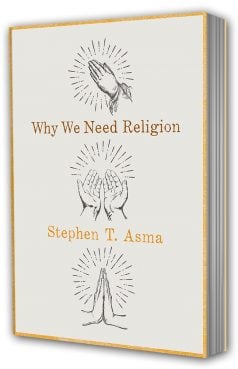 Now, his latest book, “Why We Need Religion,” asks that readers’ minds stay open even as he writes things that send partisans in religion vs. science debates into a tizzy, such as:

The week the book was released in June, Asma also posted a related essay in The New York Times, “What Religion Gives Us (That Science Can’t).” It provoked 1,200 comments, favorable and damning, in a matter of hours.

True believers look askance at his argument that the veracity of beliefs – a creator God, salvation through Jesus, the self-erasure of Buddhist enlightenment and so on – is irrelevant. Asma argues that religion evolved as a self-protective, adaptive, supportive, therapeutic and ultimately subjective practice. It is an emotional survival toolbox that resides in the limbic brain, headquarters of human emotions as true as love, or grief or fear.

Atheist Jerry Coyne, a frequent critic of Asma for nearly a decade, blasted the philosopher on his blog, “Why Evolution Is True,” as an anti-science sales-grubbing author who produced “Why We Need Religion” because Asma is a “canny speculator about what the American populace wants to hear.”

Asma’s gray eyes crinkle as he laughs over Coyne’s comments.

“He really doesn’t look at what I am saying or understand that I love science. He treats me like I’m a gullible New Age twit,” says Asma, who just finished an upcoming textbook on the evolution of cognition that he co-authored with a psychologist. 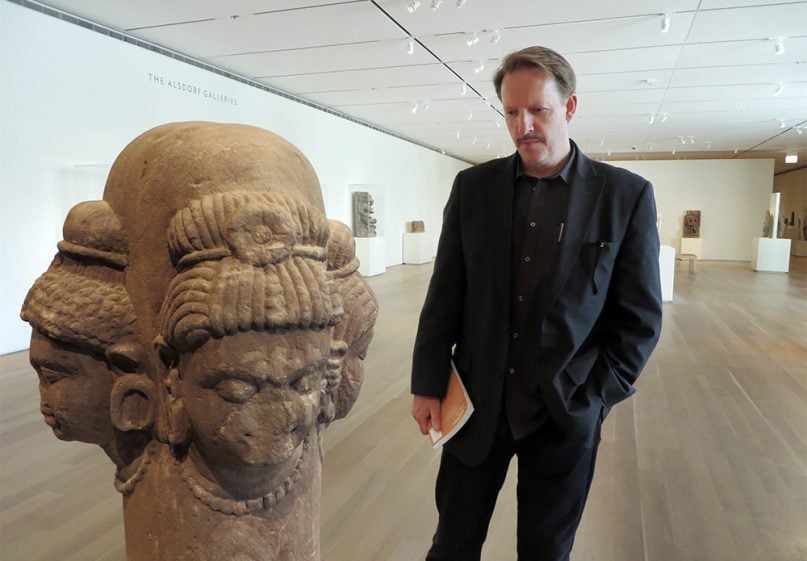 Stephen Asma looks at an ancient sculpture of a god, titled “Shiva With Four Faces,” a fertility symbol from Rajasthan, India, during a visit to the Art Institute of Chicago on June 18, 2018. RNS photo by Cathy Lynn Grossman

Asma, 51, grew up as a Catholic altar boy, a painter and a guitarist. He discovered Aristotle when a priest came to talk to his eighth-grade parochial school class. When it came time for college, he planned to major in painting.

He often takes the easy walk from his office to the Art Institute, where he finds inspiration for his paintings in the Asian sculpture exhibits and the museum’s collection of “naïve but intense” medieval paintings.

But for Asma, philosophy won out.

“I realized I could always draw or paint on my own but I couldn’t understand Immanuel Kant without help,” he says.

“I had been drawn into Buddhism by reading about it but I wanted to see it on the ground. I saw that it is more psychological than traditional religions that posit a God or a soul. You work out your own enlightenment. It is very compatible with science, yet filled with ornate imagery and rituals and devotions. It’s not like the dry intellectual Zen Buddhism we Americans get from reading books.”

His observations fit with his growing interest in neuroscience and psychology. And a thread began weaving through his books, such as “The Evolution of Imagination” (2017), where Asma describes the emotional mind as a framework for transmitting values and connection within a social world, providing the story framework for everything from joy to existential suffering.

“I came to see religion as one of the earliest forms of culture and I realized it needed to be addressed in a systematic way.” And that prompted him to zero in and write “Why We Need Religion.” Stephen Asma has drawn cartoons to accompany quotations he considers “epic,” such as this one from Persian poet and Islamic scholar Rumi. Image courtesy of Stephen Asma Stephen Asma, who has spent many years visiting and teaching in China and Southeast Asia, drew a modern Buddha with meditation beads. Image courtesy of Stephen Asma 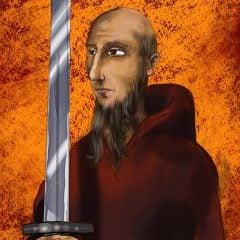 Stephen Asma calls his painting “The Belligerent Monk” because “Sometimes your enemies are real and you have to fight,” he says. Image courtesy of Stephen Asma

Even so, Asma says, leaning his tall frame back in his office chair and ticking off his points, he has no problem writing off beliefs that collapse under the eye of science. After all, he is a founder and senior fellow of Columbia College’s Research Group in Mind, Science and Culture.

“If my students say evolution didn’t happen, I will try to teach them the facts. My argument is not that any belief that makes you feel good is all right.” However, beliefs that “are out of the realm of proof” – the existence of God or the soul or free will or the prospect of an afterlife – can be respected for their emotional sustaining roles.

Michael Shermer, publisher of Skeptic magazine and a columnist for Scientific American, recently asked Asma why he isn’t an atheist if he operates like one who doesn’t believe in God.

Asma  replied, “You can’t know for sure but in my own life, I suspect there is no God in the personal way that the monotheisms recognize. ” And so, in classic Asma way, he leaves the door open.

He may not kneel in prayer like the Catholic schoolboy he once was. But, he says: “Sometimes there is no help by other human beings, and your emotions go out to the universe. We evolved things such as prayer to manage that spontaneous yearning. I’m not embarrassed. I don’t think it is intellectually cowardly. Religiosity is in human nature.” 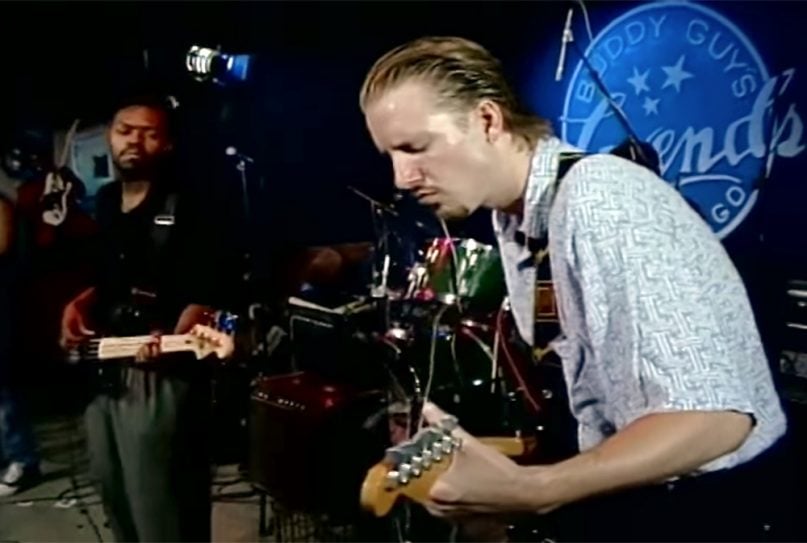 (Cathy Lynn Grossman has covered religion, ethics and spirituality for 20 years. This story was written with support from a Templeton Foundation grant.)