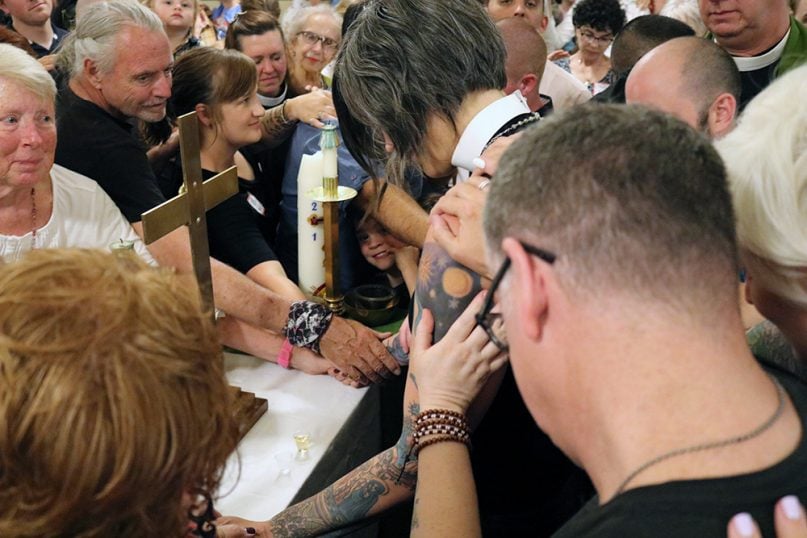 Congregants pray over the Rev. Nadia Bolz-Weber during her farewell service at House for All Sinners and Saints in Denver on July 8, 2018. (Photo by the Rev. Theresa S. Thames)

(RNS) — With silvering hair, dark makeup and liturgically inspired tattoos, Nadia Bolz-Weber stood late on a Sunday afternoon in early July to celebrate her final service as pastor of House for All Sinners and Saints, the Denver church she founded a decade ago as a 39-year-old divinity student.

The service was like any other at HFASS (pronounced “half-ass”): children played freely in the aisles, the a capella choir finished its opening hymn and Bolz-Weber invoked God using both feminine and masculine imagery. Only the regular members might have noticed the presence of so many first-timers packing the church, taking a final opportunity to hear its celebrity pastor preach.

In mid-June, Bolz-Weber, a Lutheran and now one of the best-known mainline Protestant preachers in the country, announced she would be leaving to explore life as a full-time “public theologian.”

“This church is the great love of my life, and always will be,” she said in a farewell speech during the service.

Bolz-Weber said she had decided to step away only recently and still can’t entirely explain what made her feel like it was the right time. She reached a point, she said, where “the church still loves me, but I don’t think the church still needs me.”

“I was aware how dangerous it was for founders to stay too long,” Bolz-Weber later told Religion News Service. 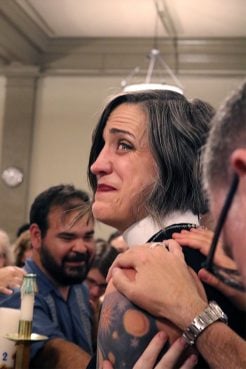 Bolz-Weber tears up as congregants pray over her during a farewell service at House for All Sinners and Saints in Denver on July 8, 2018. (Photo by the Rev. Theresa S. Thames)

But there were signs, too, that she had done all she could do at HFASS. “I didn’t come to this job with everything, but it felt like I was equipped with the ability to welcome thousands of people through the doors,” she said. “I was at a retreat recently where there were 30 people I didn’t recognize, and I just had this feeling like, ‘I can’t welcome any more people.’”

Bolz-Weber’s signature talent is welcoming people who think the church wouldn’t welcome them. The eight people who showed up in her living room for a Sunday evening service in 2008 were mostly LGBT people, those with religious baggage, addicts and others who don’t fit at many Sunday services but want to experience God’s grace. Bolz-Weber, a former standup comedian and recovering alcoholic with a streak of dark humor, felt sent to minister to them.

She granted congregants latitude to make up their own rituals, including delivering food to those who had to work on Thanksgiving and a yearly “blessing of the bicycles.”

In 2011, after preaching at an annual Easter sunrise service at Red Rocks, the Denver Post put Bolz-Weber on its front page. Bolz-Weber was horrified, she later told Terry Gross on “Fresh Air,” when suburbanites subsequently started showing up to HFASS. (She said she warmed up to it.) Today, the congregation’s roughly 500 “housemates” meet in a large community church in downtown Denver.

By 2015, Bolz-Weber had put two books, “Pastrix” and “Accidental Saints,” on the New York Times bestseller list. (A new one, titled “Shameless: A Sexual Revolution,” is due out in January.) She lectures constantly — most recently at the Evangelical Lutheran Church in America Youth Gathering, to theologians at Pepperdine University and at the feminist MAKERS Conference in San Francisco. Her admirers range from conservative columnist Rod Dreher to Black Lives Matter activist Shaun King.

She has also given up handling the day-to-day business of the church, making her official break all but a formality.

Bolz-Weber is hardly the only celebrity pastor to walk away from local church ministry. Recently, evangelical pastor Eugene Cho announced he is leaving the Seattle church he founded in 2001 to devote himself to anti-poverty work. Four years ago, Rob Bell left his Michigan megachurch, Mars Hill, after 12 years to focus on speaking and writing.

Unlike these pastors, Bolz-Weber is leaving in part to increase her contact with secular audiences — as she calls it, “preaching to the Gentiles.”

In Denver, many are asking what will become of House for All Sinners and Saints after its founding pastor’s departure. 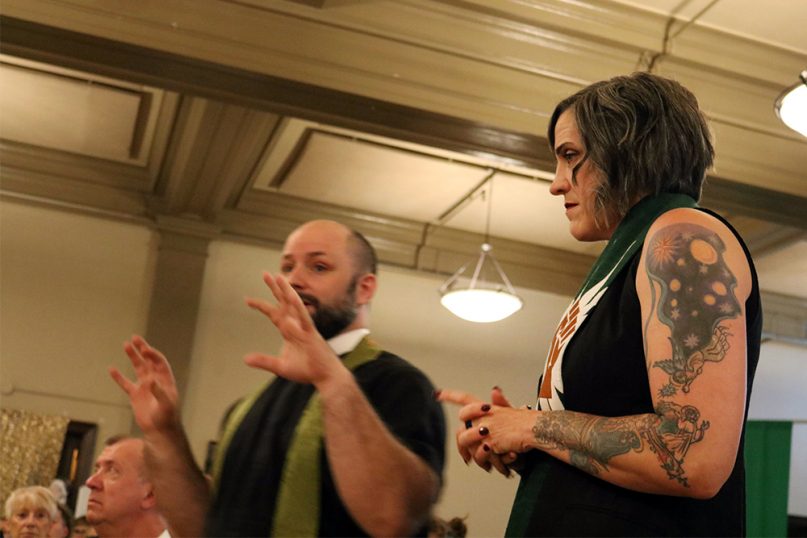 The Rev. Reagan Humber, left, speaks during a farewell service for Bolz-Weber at House for All Sinners and Saints in Denver on July 8, 2018. (Photo by the Rev. Theresa S. Thames)

Since Bolz-Weber hired Reagan Humber in 2015, nine months before he became an Episcopal priest, she told him to prepare for the day she would leave. Humber admitted he was still shocked when the time came. 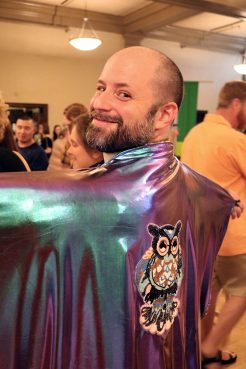 Humber, who will take over as pastor at House for All Sinners and Saints in Denver. (Photo by the Rev. Theresa S. Thames)

Humber takes comfort in the idea that HFASS doesn’t look for perfection. “Sure, we’re going to screw some things up,” he said. “But when we screw things up and then still come back the next week, that’s where the grace happens. That’s when church gets real and the dead are raised.”

That collaborative style has made HFASS a powerful model, said Boyung Lee, dean of the faculty at Iliff School of Theology who once taught Humber at Graduate Theological Union in Berkeley.

“There are many younger people who have had wounding experiences with organized religion but still want to find a relationship with God through community,” said Lee. “I think HFASS provides that space.”

Humber, who came to HFASS from St. Gregory of Nyssa Episcopal Church in San Francisco, is well-equipped to carry on the church’s alternative vibe. His partner is a hair stylist who moonlights as the drag queen Fruitbomb, and Humber is open about his struggles with opiates and alcohol.

“People in recovery know what it’s like to be at the end of your ability, and that’s powerful,” said Asher O’Callaghan, a longtime HFASS member who is the first transgender person to be ordained in the ELCA. O’Callaghan was drawn to Bolz-Weber, he said, because she leads from a place of vulnerability, a trait he feels Humber shares.

As Bolz-Weber’s final service wound down, parishioners came forward to receive blessings from her; at the end, the congregation returned the favor, performing a traditional laying on of hands.

Then, folding tables were brought out for a classic Lutheran potluck consisting mainly of casseroles. A woman sang a song mocking the criticism Bolz-Weber occasionally receives for being too progressive and overly tattooed. The congregation’s parting gift was a stole with images of Wonder Woman on it.

Touched, Bolz-Weber thanked the crowd. She’s confident about the future of HFASS and its mission.

“This church has never been mine,” she said. “It has always been God’s.”