(RNS) — Standing beneath the cast aluminum statue of Lady Justice in the Department of Justice’s Great Hall, Attorney General Jeff Sessions made a bold statement last week: “Many Americans have felt that their freedom to practice their faith has been under attack.”

He spoke of Catholic nuns being forced to buy contraceptives. (Actually, the Affordable Care Act required the nuns to cover the costs of contraceptives in their employees’ health plans.) He cited judicial nominees questioned about their faith.

And in a nod to Jack Phillips, the Colorado baker who won a Supreme Court case after refusing to bake a cake for a gay couple’s wedding, Sessions said, “We’ve all seen the ordeal faced so bravely by Jack Phillips,” who was seated nearby.

An increasing number of Americans appear to agree with Sessions.

A new poll by Public Religion Research Institute shows a modest but statistically significant uptick in the percentage of Americans who believe that owners of wedding-based businesses, such as caterers, florists and bakers, should be allowed to refuse to serve same-sex couples if doing so violates their religious beliefs.

The poll, conducted last month from among 2,008 Americans, found that 46 percent thought small businesses should be exempted from having to serve LGBT couples — a 5 percentage-point increase from last year, when 41 percent of Americans said the same. 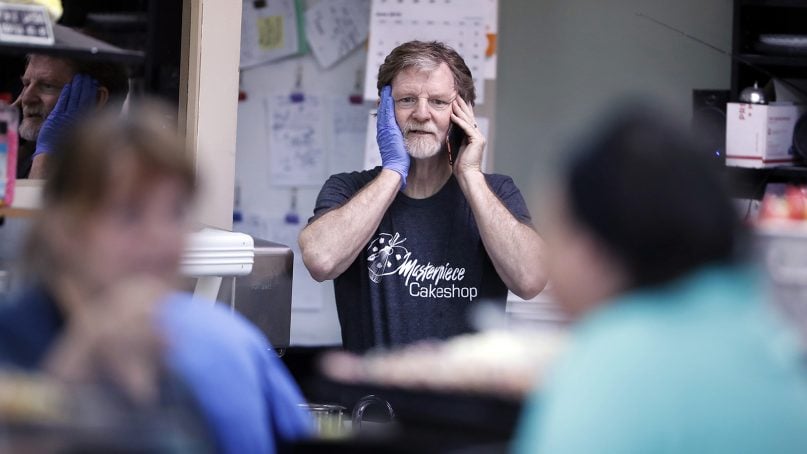 Jack Phillips, owner of Masterpiece Cakeshop, manages his shop on June 4, 2018, in Lakewood, Colo. The U.S. Supreme Court ruled that he could refuse to make a wedding cake for a same-sex couple because his religious beliefs did not violate Colorado’s anti-discrimination law. (AP Photo/David Zalubowski)

The owner of Masterpiece Cakeshop in Lakewood, outside of Denver, Phillips relayed how early in his career he and his wife agreed to uphold certain Christian principles such as not baking cakes for Halloween, a holiday with pagan roots, and closing for business on Sunday, the Christian Sabbath.

He also said he was happy to serve all people — including LGBT people — so long as he doesn’t have to create same-sex wedding cakes, which he regards as artistic expression.

“Every American should now be able to live and work freely according to their conscience without fear of punishment from the government,” Phillips said.

Service refusals are a relative newcomer to the religious liberty realm. It used to be that religious people asked for exemptions: Jews might ask to be excused from school on their High Holy Days; Seventh-day Adventists might ask to be exempt from having to work on Saturday, which they consider their Sabbath.

Today’s legal cases involve businesses owned by religious families refusing to provide services because they conflict with their beliefs. The most notable of those cases was brought by Hobby Lobby, the craft store chain founded by the evangelical David Green and owned by the Green family, whose religious beliefs, it was argued, prohibited them from providing health coverage for emergency contraceptive drugs as mandated in the Affordable Care Act. In  2014, the Supreme Court sided with Hobby Lobby. 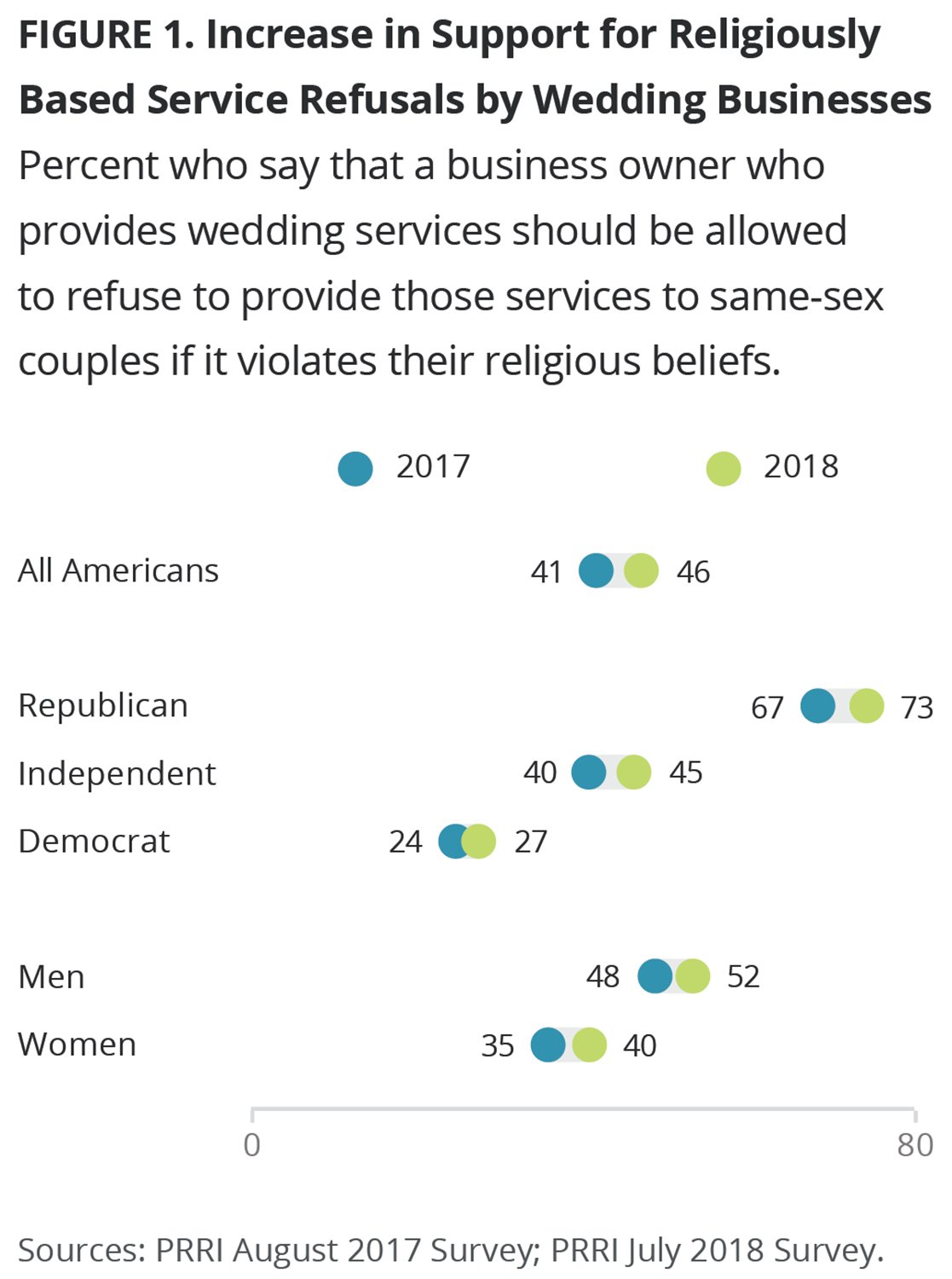 Faith-based adoption agencies that receive government funds are now the latest service providers that claim their Christian faith prohibits them from placing children with same-sex couples.

Last month, a federal judge in Philadelphia ruled that Catholic Social Services had violated the Philadelphia Fair Practices Ordinance, which prohibits discrimination on the basis of sexual orientation and gender identity, because it denied adoptions to same-sex couples.

Anticipating such problems, at least seven states have already passed laws that would allow such agencies to deny adoptions to gay or lesbian couples on religious liberty grounds.

LGBT advocates and many secular Americans have vehemently protested such laws, often pointing out that religious freedom claims were also made to defend segregation in the civil rights era.

“There were places that did not want to accommodate mixed-race couples, for example,” said David Niose, legal director at the American Humanist Association. “They claimed that mixing the races was offensive to their religious views. But those claims were struck down and rightly so.”

Recently, anti-discrimination activists have fought back. A campaign titled Open to All recently convinced several big-name companies, including Airbnb, Lyft and Levi Strauss, to publicly vow to serve customers from all backgrounds.

Some evangelicals counter that their motive is not to slight LGBT people, but rather to live up to their Christian faith.

“Most people in the religious community do not want the LGBT community to ever feel like they’re second-class citizens, or for someone to be denied service in an illegal way,” said Jeff Hunt, director of the Centennial Institute, a think tank at Colorado Christian University. “We need to work through this. We’re at a watershed moment where these two rights are facing off with each other.”

Hunt said evangelicals are concerned that secular Americans and some advocacy groups, particularly the Southern Poverty Law Center, are stridently anti-religious and appear to be motivated by religious animus.

Now the Trump administration and the Department of Justice appear to agree with Hunt’s assessment. At his religious freedom summit, Sessions announced the creation of a religious liberty task force that will direct agencies to protect religious liberty.

“This Department of Justice is going to court across America to defend the rights of people of faith,” he said.

That leads researchers at PRRI to suspect that although more people say they support service refusals to LGBT people, that support may be fleeting and could be a reaction to the Supreme Court ruling in Masterpiece Cakeshop v. Colorado Civil Rights Commission.

“There’s a reason I think it might be a momentary shift and not a trend,” said Daniel Cox, research director at PRRI. “It may be a short-term reaction to the political environment than a long-term shift in opinion on this issue.”

The PRRI poll had a margin of error of plus or minus 2.6 percent.

Sponsored
In the world’s largest democracy, people of faith aren’t free
Follow us on Facebook!
Submit your photos to RNS