(RNS) — For millions of Americans, summer is the season for short-term mission trips. Church groups take off for faraway places where sharing God’s love involves construction projects, teaching Bible lessons at camps and bringing medical care to people who seldom if ever see a doctor or a dentist.

But for mission trip operators, it’s also time to weigh the risks and rewards that come with bringing the well-intentioned face-to-face with real-life hardships in far-flung locations.

This year’s many risks, from fuel-price riots in Haiti to violent unrest in Nicaragua, have forced a fresh reckoning with thorny questions: How much risk is too much? And how do trip leaders balance safety with a perceived imperative to take risks for the gospel?

“God tells us we should go, and that command hasn’t changed,” said Nathan Norman, spokesman for Praying Pelican Missions, a Minneapolis-based operator of mission trips. “But we must use wisdom and not have people in unnecessarily risky situations that would put them in harm’s way.”

Praying Pelican has had a challenging season. When riots broke out in Haiti in July, the ministry diverted all of its planned Haiti trips to countries thought to be safer, if flights were available. Political unrest in Nicaragua prompted the organization to cancel one Nicaragua trip; participants backed out of others. Itineraries changed at the last minute to work around a deadly volcano in Guatemala and hurricane threats in Puerto Rico. Other trips went forward, but only after participants said they were ready to face whatever dangers may come.

“Everyone has to make their own decision,” said Norman. “Do we send a youth group or an adult group to a particular place? Should we let children go? Who can handle it? And what is God calling us to do?” 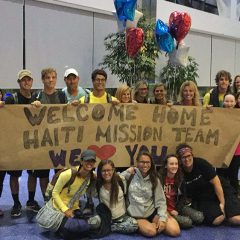 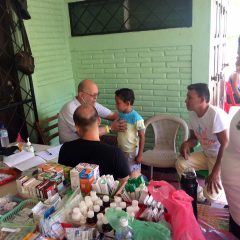 A missionary preaches to a large group of school children during a mission trip to Nicaragua. Photo courtesy Project Hope

Praying Pelican was far from alone this year in being forced to dodge many trouble spots. In July, Haiti erupted in riots and demonstrations after the government hiked gas prices, forcing hundreds of short-term mission groups to hunker down and pray for safety as violence flared, cell phone networks failed and return flights to the U.S. were canceled.

The stranded and stressed included groups from across the U.S. denominational spectrum: Churches of Christ groups in Alabama, Arkansas and Oklahoma; Baptists from Alabama and Georgia; Presbyterians from Raleigh, N.C.; Roman Catholics from Baltimore; and independent churches in Bradenton, Fla., and Bear, Del.

Among those unable to leave was a group of 22 from Mount Olivet Baptist Church in Hartwell, Ga. The group had been in Haiti to conduct vacation Bible schools at churches. Members were stuck for days in a compound, shared by numerous ministries, protected by 10-foot walls and an armed guard. Pastor Jason Webb, who led the trip, described group members as “apprehensive but not fearful.” According to Webb, most said they would return to Haiti.

Nicaragua was seized by deadly violence before the summer missions season started. Since the government announced changes to the country’s social security program in April, more than 300 citizens have been reportedly been killed in political violence, forcing the cancellation of more than 100 short-term trips.

“We’ve never experienced anything like this before,” said Kim Bradley, president of Project Hope, a ministry in Springfield, Mo., that runs medical clinics, builds homes and ministers to prostitutes and children who scavenge for food from garbage dumps. The 20-year-old ministry had teams stuck in Haiti and canceled more than 50 trips to Nicaragua that were scheduled for 2018 and early 2019.

“We’ve canceled everything from now until we don’t know when in Nicaragua,” said Bradley, whose ministry will likely lose $100,000 in income this year from refunding travel fees to some 400 travelers.

Many groups running mission trips aren’t prepared for worst-case scenarios, said Brian Heerwagen, CEO of the Standards of Excellence in Short-Term Mission, an organization whose 150 members have developed risk-measurement metrics for mission trips. “Only about one-fifth of these sending groups have proper risk assessment and crisis management plans in place,” said Heerwagen. “The majority of short-termers may be going overseas with groups that do not have people on the ground in-country to do risk assessment, that lack proper insurance and that have not trained leaders about what to do when things go wrong.”

Bad things can happen, Heerwagen said, and groups need to know how to deal with them. Best practices include assessing risk beforehand with reliable in-country sources, developing plans to mitigate risk, having a crisis management plan in place for when the worst happens and training all staff and volunteers to know how to respond.

Getting all groups prepared would be a massive undertaking. He estimates as many as two million Americans go on international short-term trips each year in partnership with some 100,000 churches, 3,500 organizations and 1,500 schools.

Meanwhile, some groups with traditions of leading yearly mission trips have been undeterred by this year’s setbacks. Leaders say they won’t let unpredictable circumstances interfere with what they regard as a calling.

“Our church and mission organization are still planning mission trips to Haiti, including one planned for November,” said Webb. “I am also encouraging churches to continue and to start mission efforts to wherever God leads.”

“They were nervous and uncertain, but they never really felt threatened,” said spokesman Justin Warns. “A number of them said they would go again.”

Norman said there will always be risks in countries like Haiti and Nicaragua, where poverty and political instability coexist, but he said the rewards outweigh the risks. And some groups choose to travel to more dangerous areas because that’s where the need for humanitarian help and hope is the greatest.

But trusting solely in God’s provision is not adequate when it comes to risk management, Heerwagen said.

“Some people say, ‘God will take care of us,’ but groups have a duty to care for the people they send.”