NEWPORT, Wash. (RNS) — Thubten Damcho stood before a half-dozen garden beds bursting with leafy vegetables and thought back to her life before becoming a Buddhist nun, when she was so busy as a Singapore professional that she rarely took time to eat well.

Damcho would eat between meetings, she said, or late in the evenings to socialize and network. Besides ramen noodles, she didn’t really know how to cook.

Now, though, she’s cooking for a whole community. She regularly helps prepare healthy, simple, vegetarian meals for about 30 people at Sravasti Abbey, a Tibetan Buddhist monastery located about an hour north of Spokane, Wash.

Damcho credits her abbess, Thubten Chodron, with transforming both her way of eating and of living. Chodron, who founded Sravasti Abbey 15 years ago, brings food into many of the values lessons she teaches to the 16 full-time residents of the abbey. She has compiled these insights in her forthcoming book, “The Compassionate Kitchen: Buddhist Practices for Eating with Mindfulness and Gratitude,” offering advice on using mealtimes to develop compassion and gratefulness. It comes out in December from Shambhala Publications.

According to Buddhism, all earthly struggles stem from attachment, and food is no exception. Chodron is careful to explain, however, that there’s nothing wrong with enjoying eating.

“Enjoyment is a feeling of pleasure,” said Chodron. “Attachment is that you’re not just content with enjoying it, you want more, you want better; so there’s craving, there’s grasping, there’s clinging, and that’s what brings difficulty.”

In her book, she teaches the Five Contemplations, which are aimed at fostering mindful eating. They’re short verses designed to inspire reflections on the kindness of those who made the meal possible, how a meal and the preparation that goes into it can help improve one’s practice, guard the mind from thoughts that lead to wrongdoing, see food as medicine and seek enlightenment. 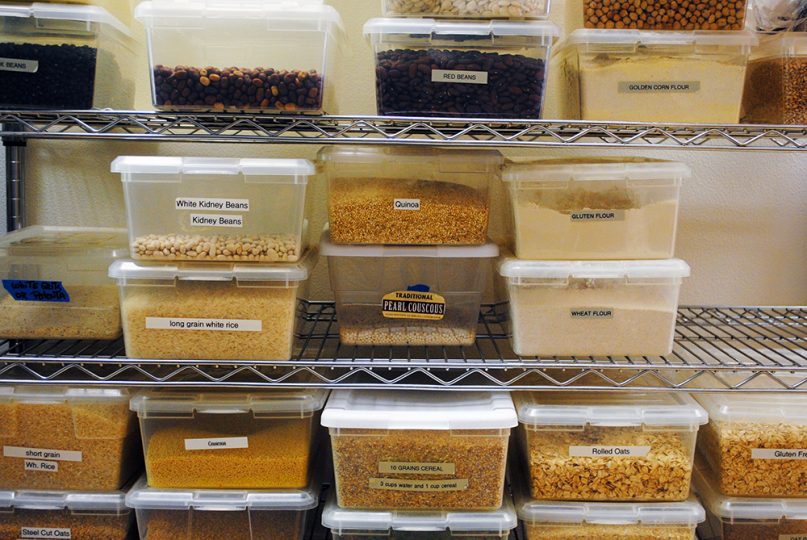 Christian Wedemeyer, associate professor of the history of religions at the University of Chicago, said vegetarianism plays an essential role in most Buddhist traditions, though that wasn’t always the case. He explained that in the 5th century B.C.E. when the Buddha lived, monastics would eat whatever lay people offered, even if it was meat that wasn’t intentionally killed for them.

“At a certain point, Buddhist thought evolved,” Wedemeyer said. “It seemed having compassion for all beings and not eating them began to come to the fore, so any consumption of meat violated their practice to benefit all beings.”

Lunch is the main meal at Sravasti, honoring a custom that dates to the Buddha’s time. The 15 nuns and the one monk who live there take turns preparing food for the residents and about 15 guests on average. Many guests are Buddhists; others are curious to learn about the tradition.

Before the meal, a dharma talk, or public teaching from a Buddhist leader, is given. Chodron explains in the book that it’s a Buddhist tradition to offer a teaching in exchange for the meal.

Before they began prepping the food, they chanted, “How fortunate we are to have the opportunity to prepare and cook this food. The food will nourish their bodies, and the love we put into preparing it will nourish their hearts.”

Chants, many of which are included in Chodron’s book, are recited before and after meals, when receiving and offering food, and when working. Chodron also published a chant for grocery shopping for readers who gather their food this way; the monastics only eat what they grow themselves or what is offered to them. The chants also remind the cooks that the food they’re preparing was made available only through the kindness of others. A small group of volunteers regularly sends or brings boxes of food to the abbey, careful to include only ingredients that follow their diet: no meat, onions, leeks, garlic or radishes (vegetables that are believed to excite the senses). Although sweets sometimes make it into the kitchen, the goal is to eat healthily.

“We’re not cooking to please anyone. … It’s not about applause,” said Damcho. “It’s how we show love. … We offer it and hope they feel nourished.”

Sarah Conover, a Spokane author, donates food to the abbey and regularly volunteers to cook for guests and residents.

“I love to cook for big crowds and love to treat them to something special,” she said. Conover’s son is a Buddhist monk in Thailand, so she knows firsthand how appreciative the abbey’s residents are when offered a meal. Wedemeyer explained that more lay people, like Conover, are incorporating Buddhist principles into their daily lives.

“Food is medicine,” Conover said. “Don’t get too caught up in preferences or you’ll turn into a foodie in the bardo (in Buddhist teaching, the state between death and rebirth) and never get out. Most of all, beyond anything, is that I now say the Five Contemplations before every meal.”

Learning to engage food with respect has a way of shaping the heart, Chodron said.

“We need to learn to accept that whatever appears on the table is what you eat, and to get over a mind that complains.”

This sentiment is echoed by a chant that is recited at the monastery before eating.

“By seeing this food as medicine, I will consume it without attachment or complaint, not to increase my arrogance, strength or good looks, but solely to sustain my life,” the chant says.

Chodron has written 17 books and edited 17 others. She said her hope for “The Compassionate Kitchen” is to present Buddhists and non-Buddhists a different way to look at food and eating than what mass consumer culture teaches.

“There can be something very special and sacred about offering food, receiving food, eating together, chanting before and after a meal,” she said. “Sitting down for a family dinner instead of having everybody just walking into the kitchen picking something up and walking out of the kitchen, but giving people a chance to sit down and actually talk to each other.”