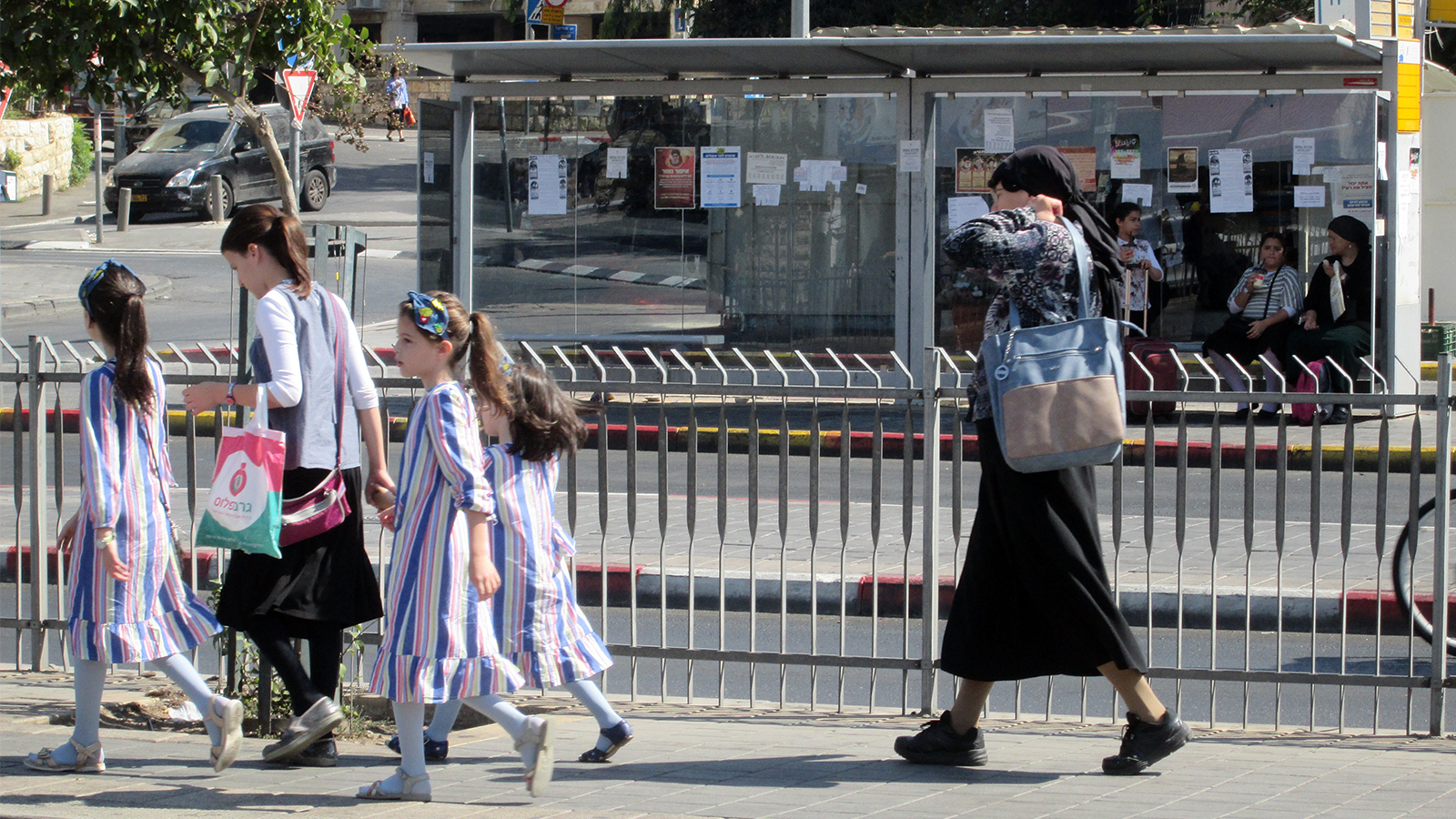 In Israel, ultra-Orthodox women have seven children on average and, if their husbands study Torah full time, which is a communitywide ideal, women may also be their family's sole breadwinners. RNS photo by Michele Chabin
August 24, 2018
Yonat Shimron

“We women are 50 percent of the haredi (ultra-Orthodox Jewish) population but we have no access at the decision-making table,” said Shushan, the founder of Nivcharot, an organization that advocates for the participation of ultra-Orthodox women in local and national politics.  “We have problems no one, including male haredi Knesset members, are addressing.”

Tamar Ben-Porath, a secular attorney, and 10 women’s organizations, all but one of them secular, petitioned Israel’s Supreme Court to force religious parties to change their rules. The court agreed to hear the case and gave the ultra-Orthodox party Agudath Yisrael until Sept. 2 to change its policy and allow women to run. If it doesn’t, the court said it would issue a ruling.

“We are women supporting women,” Porath said. “It is unacceptable that a certain sector of society is discriminating against women, claiming this discrimination is based on the sector’s social norms. Today it’s haredi women who are being barred from being candidates. Tomorrow it could be Arabs or another group.”

Although ultra-Orthodox women are not named in the lawsuit because it would imperil their standing within the very community they are trying to reform, Porath said, they are the true trailblazers fighting for change within the insular, patriarchal ultra-Orthodox community.

The demands for representation by Shushan and a small but growing number of religious women come amid a seismic shift in Israeli ultra-Orthodox society, where women give birth to an average of seven children and many support their families financially, allowing their husbands to study Torah full time.

As the community, which comprises 12 percent of Israel’s population, has grown, this spiritually rich but economically precarious lifestyle has become increasingly unsustainable. To meet the challenge, several ultra-Orthodox rabbis have given women greater latitude to study for secular professions, as long as they do so in a gender-segregated environment. 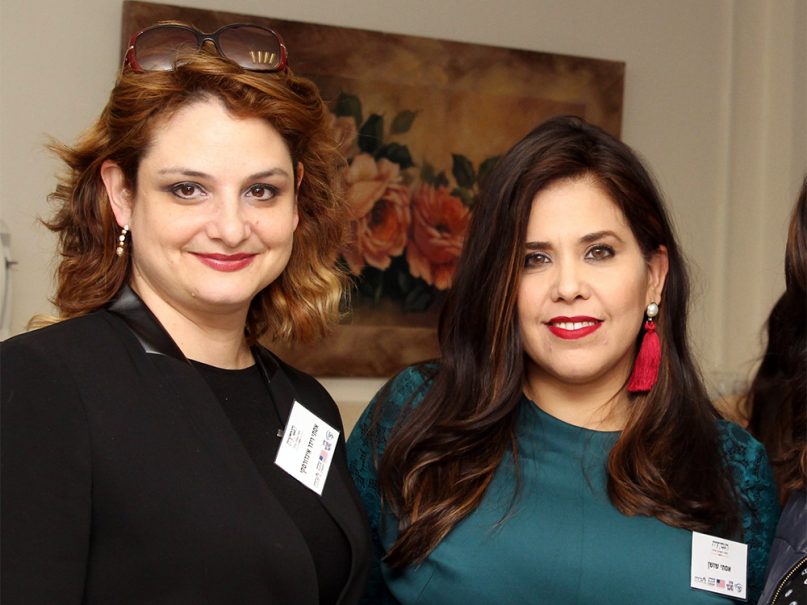 Esty Shushan, right, co-CEO and founder, and Estee Rieder-Indursky, co-CEO, of the organization Nivcharot are demanding that Israel's ultra-Orthodox political parties allow women to run on their ballots for national and local elections. Photo by Efrat Ben-Yosef

“In the past decade there have been a lot of social changes in haredi society,” Shushan explained. “Haredi women are allowed to become marketers, lawyers, journalists, but the one place they can’t enter is politics. There are zero haredi women in the Knesset, in municipal parties, and it is intolerable.” (Knesset is the term for Israel’s Parliament.)

Kimmy Caplan, a political scientist at Bar-Ilan University, says that for ultra-Orthodox society, there is “a huge difference” between a woman working in an office and a woman campaigning during an election.

“Haredi women are having a lot of impact, changing social norms,” Caplan said. “They are meeting mainstream Israeli society and society is meeting them. They are ending stereotypes. But in the eyes of haredi political parties, which take their directions from haredi rabbis, women should not be up on a podium making speeches. There is still an ideological barrier ultra-Orthodox women are up against.”

Since Israel was established in 1948, no haredi party has allowed a woman to run on its ticket, citing bylaws that require the approval of prominent rabbis. In 2015, Ruth Colian, an ultra-Orthodox activist, created U'Bizchutan, a party focused on haredi women’s issues, but it received only 1,802 votes, far fewer than the threshold needed to win a seat in the Knesset.

Only one haredi woman, Tzvia Greenfeld, served as a parliamentarian, from 2006 to 2009, for a party that is not haredi. Today, 35 women serve in the 120-member Knesset.

Shushan said that for ultra-Orthodox women to have any influence in the public sphere, “we need to join the existing parties,” which wield a great deal of power in Prime Minister Benjamin Netanyahu’s governing coalition.

But Bar-Shalom, an activist and educator, told the Times of Israel she does not expect to become a candidate.

Ultra-Orthodox women can “make use of politics even without being a member of Knesset,” Bar-Shalom said.

Shushan, however, believes only ultra-Orthodox women working within an established ultra-Orthodox party can effectively tackle the many challenges they face.

“The government is giving many scholarships to encourage more haredi men into the workplace, but haredi women receive much less funding. Haredi women are diagnosed with breast cancer later than other women because haredi society says it’s 'immodest' to name female body parts. The pay gap between haredi women and other women in the workplace is something like 30 percent,” Shushan said. 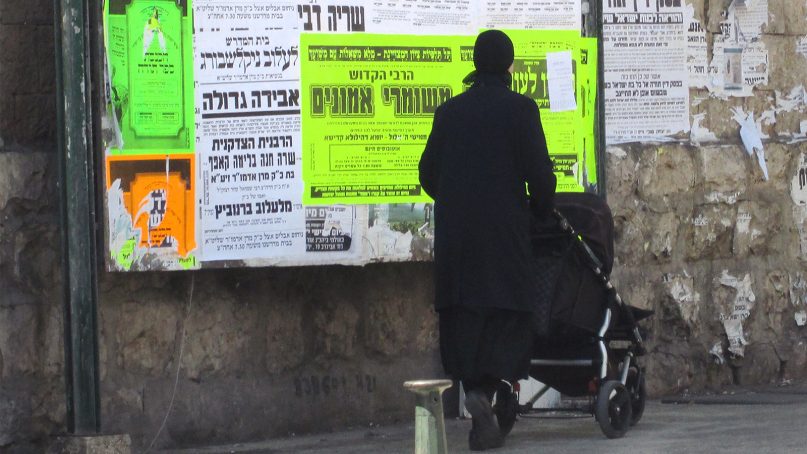 Rachel Stomel, a spokeswoman for the Center for Women’s Justice, one of the court case’s petitioners, said ultra-Orthodox male lawmakers “don’t show up” to Knesset forums on the well-being of women.

“Haredi women need the opportunity to speak for themselves,” Stomel said.

And while ultra-Orthodox lawmakers deny religious women the right to serve, “they have no problems working with secular women in the Knesset,” Shushan noted.

While these words may sound patronizing, Chevy Weiss, an American-Israeli ultra-Orthodox religious strategist to political parties in the U.S., said women are “very respected and revered” by ultra-Orthodox society.

“The greatest rabbis of our generation consult their wives on pressing issues," Weiss said. "We have a great deal of influence behind the scenes.”

Weiss questioned how ultra-Orthodox women who want to become lawmakers can call themselves haredi if they do not follow their rabbis’ rulings.

“In haredi society we follow the leadership. They tell you who to vote for, what schools to send your children to. You don’t have to listen, but then you’re not really haredi,” Weiss maintained.

Shushan acknowledged that she and other female ultra-Orthodox activists “have paid a price” for demanding that women be allowed to run for office, even if they didn’t spearhead the court case.

“There are people in the community who either ignore us or shame us on the internet and elsewhere. One rabbi said we’re schizophrenic and need psychiatric help.”

She moved her four children to different schools after receiving threats.

Though she has high hopes for the court case, Shushan is realistic about its potential impact, even if it succeeds.

“The parties will find a way to get around it, but I feel the change in our community,” she said. “Slowly, slowly things are happening.”