NOTE: This story includes terms that may be considered offensive.

(RNS) — An African-American bishop of the Church of God in Christ and frequent critic of President Trump said his personal Twitter account has been permanently suspended, apparently for using a racially sensitive term.

Bishop Talbert Swan, a Massachusetts pastor and a Nova Scotia jurisdictional leader for the predominantly black Pentecostal denomination, said he received an email from Twitter on Friday (Aug. 24) informing him of the suspension.

“Your account has been suspended and will not be restored because it was found to be violating Twitter’s Terms of Service, specifically the Twitter Rules against hateful conduct,” the company told him.

Swan, who said he had more than 70,000 followers, suspects the specific cause of the suspension is his use of the word “coon,” a term the website etymonline.com says is sometimes used as an insult about a black person. The word in this sense stems from the word “barracoon” and is based on the Portuguese word “barraca” that refers to an enclosure for slaves who were transported in West Africa, Cuba and Brazil.

But Swan says the meaning of the word depends on the context. 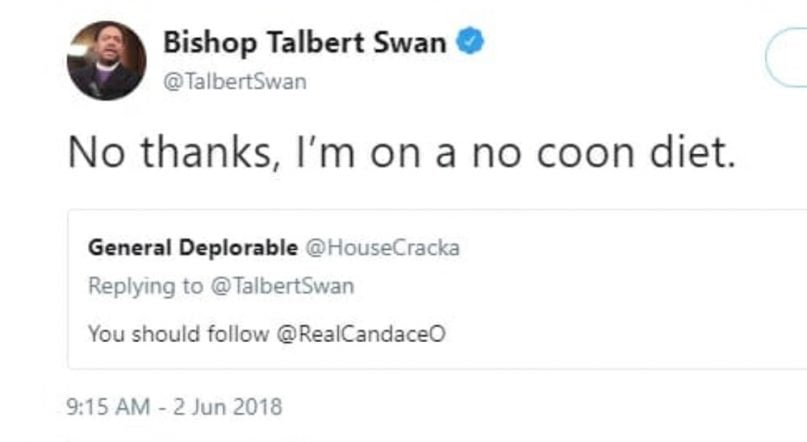 “I think Twitter needs to be educated culturally to understand that when black people use that term they mean it in the context of someone who’s African-American that they consider to be a traitor or a sellout or someone who is speaking or doing things that is not in the best interest of the African-American community,” he said. “And, in my instance, those who parrot alt-right, racist ideology.”

On June 2, Swan tweeted in response to a suggestion that he follow someone with whom he disagreed, “No thanks I’m on a no coon diet.”

Last week, more than half a dozen Twitter users noted that they had reported Swan and posted screenshots of responses they had received confirming that @TalbertSwan had violated Twitter’s rules of discourse.

One, @Gerald_Anzano, specifically connected Twitter’s notice of suspension with Swan’s “coon” tweet, adding, “Using God as a shield to promulgate spewing hatred? Expect to be called out.”

Swan, who is president of the NAACP’s Springfield, Mass., chapter, said he first got wind of his suspension from these posts. He calls those users “my detractors”; several describe themselves on Twitter as supporting Trump.

Swan provided Religion News Service with recent tweets from his account that were critical of Trump and the president’s Christian supporters.

“Real Christians don’t make excuses, support, dismiss, or defend pathological lying, sexual deviancy, malignant narcissism, white supremacy & bigotry,” he wrote in an Aug. 19 tweet that received more than 26,000 likes. “I don’t give a hell how many conservative judges you get, you cannot be a Christian & defend @realDonaldTrump. Plain and simple.”

Swan recently used his account to post an open letter criticizing pastors who met with Trump. Swan said he has also complained that liberal Democrats take blacks’ votes for granted. A fan of the Boston Celtics and Pittsburgh Steelers, he also posted his musings about sports. 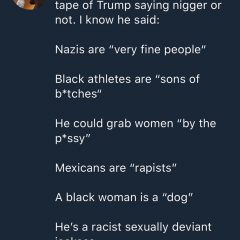 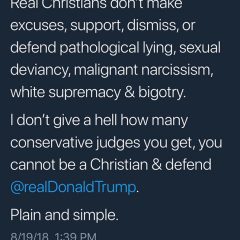 In its email message to Swan, the company wrote, “It is against our rules to promote violence against or directly attack or threaten other people on the basis of race, ethnicity, national origin, sexual orientation, gender, gender identity, religious affiliation, age, disability, or disease.

“Additionally, if we determine that the primary purpose of an account is to incite harm towards others on the basis of these categories, that account may be suspended without prior warning.”

Others questioned Swan’s suspension, including @ReignOfApril, who tweeted: “He’s a COGIC bishop, for goodness sakes.”

Swan himself said he doesn’t understand why the personal Twitter account of conservative radio host Alex Jones was recently suspended for a week for violating rules about inciting violence, while his account appears to have been suspended permanently.

“When you get the president calling a black woman a dog or Roseanne (Barr) calling a black woman a gorilla and they still have their accounts on the forum,” the bishop said, “to say that me making a reference to a coon is the catalyst for a permanent suspension, then you have to question how they enforce their terms of service.”