(RNS) — Eboo Patel, a Muslim social activist who was born in India, is best-known as the founder and president of the Interfaith Youth Core, a nonprofit organization that partners with some 500 American colleges and universities to work on interfaith programming.

Now he’s written a new book, “Out of Many Faiths: Religious Diversity and the American Promise” (Sept. 4), the third in a series of books by scholars addressing issues of diversity called “Our Compelling Interests.”

In it, he offers a passionate defense of American religious diversity as one of the seminal features of U.S. democracy, stretching back to the vision of the Founding Fathers, who he says got it “exactly right.”  He also proposes a new narrative to replace the Judeo-Christian motto with “Potluck Nation,” which he thinks better describes today’s religious diversity.

Patel, who is 42 and lives in Chicago, is hopeful about America’s vision and believes good can come out of bad. The following interview was edited for length and clarity.

The story of religious diversity in American history is a story that ought to inspire us to do good work today. I wanted to tell that story, especially at a time of really ugly prejudice and discrimination and tension. Reminding people of the inspiring story that is America and religious diversity and encouraging them to be interfaith leaders I think is really important right now.

What is the state of interfaith work in the age of Trump? Has it changed? Do you see setbacks?

Barack Obama in his inaugural address talked about America being made up of Christians and Muslims and Jews and Hindus and nonbelievers and all of these communities finding dignity and welcome in America and contributing to the American project. We at Interfaith Youth Core felt part of the zeitgeist. In fact, we were working with the White House on a major program called the President’s Interfaith Campus and Community Service Partnership.

Clearly, the messages from the White House are very different now. What’s really interesting about this moment is that so much good comes out of responding to bad.

We have this great opportunity to respond to that in ways that live up to American ideas of welcoming diverse religious identity and moving toward an interfaith America.

How do you respond to Christian nationalism? Many people are waking up to it for the first time.

What’s remarkable about the American project is that our founders, Washington, Madison, Jefferson, Franklin, envision America as the world’s first religiously diverse democracy. Of all the different dimensions of identity we talk about today — race, gender, sexuality — religious diversity is the dimension of diversity that the founders got pretty much exactly right. The things they said about religious diversity in the late 18th century, we would quote today with pride when it comes to welcoming current American religious diversity.

I am trying to live up to the ideal of the founders in helping to build a healthy, religiously diverse democracy. That’s what I call an interfaith leader and that’s what I invite people to be.

You write in your book about the importance of developing a narrative inclusive of our new social reality. What does that narrative sound like? 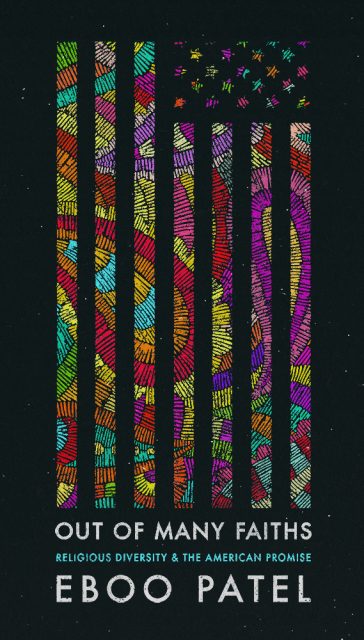 “Out Of Many Faiths: Religious Diversity and the American Promise” by Eboo Patel. Image courtesy of Princeton Press

One of my standard opening jokes when I speak on college campuses is, “You know when the Pilgrims arrived and they dusted off Plymouth Rock, they saw the words ‘Judeo-Christian Nation’ etched in that rock.” Then I’ll pause, as these bright 18-year-olds look at me, and I’ll say, “That’s a joke.”

What actually happened is that in the 1920s, the KKK unleashes anti-Semitism, anti-Catholicism and anti-black prejudice and one of the ways interfaith leaders back then responded was to create a new narrative of America they called a “Judeo-Christian” nation.

In the book I call it a “Potluck Nation.” At a potluck, you don’t want everyone to bring mashed potatoes. You want people to bring dishes that are distinct. You think to yourself, I’m really glad she brought hummus, and another person brought kebabs and another person a soufflé, dishes distinctive to their identity and heritage.

You devote a chapter to Cordoba House, the quashed plan to build a Muslim community center near Ground Zero. Why?

Cordoba House was the first post-Sept. 11 high-profile civic contribution by a Muslim community. It’s not principally a mosque. It was meant for public benefit, like a Catholic university or a hospital started by Methodists. That publicly focused project met with this unbelievable amount of Islamophobia. It also is a place where a set of people who went on to inspire the Trump campaign had their first high-profile, anti-Muslim victory, so to speak.

But America has been built by a variety of Cordoba Houses; the hospitals and colleges and schools and nonprofit organizations that religious communities have built to serve the public good. American civil society rests on those institutions. Well, Muslims are right now a large enough community in America. We want to start making similar public contributions, inspired by Islam, meant to serve America. Shouldn’t we all be welcoming this?

Are there examples that give you hope today?

I end the book with a story of an organization called the Inner-City Muslim Action Network or IMAN, based on the southwest side of Chicago. They created the first permanent memorial to Martin Luther King Jr. in the city of Chicago. There are parts of the memorial that honor rabbis and imams and female Christian leaders and their role in interfaith cooperation. Those kinds of organizations, like IMAN, like Interfaith Youth Core, because of the ugly prejudice we’re seeing, there are so many people saying, ‘I want to work for a different America.’ The ugliness of prejudice catalyzes the forces of pluralism into action. I believe we’re seeing that again and I believe we need more of that.

How has the Interfaith Youth Core fared recently?

Our work is on college campuses and it has grown dramatically. We’re seeing growth in the number of faculty teaching interfaith courses, the number of students who are running interfaith projects. We run an Interfaith Leadership Institute each year. This past August, we had nearly 150 campus delegations.

You mention in your book that when your grandmother from India came to visit you in high school you were embarrassed. Tell me how you moved beyond that?

For me, that’s a great example of an educator noticing something about a student and seeing the connection between three generations ago and immigrants of today.

The term “immigrant nation” is an invented term. In that national narrative, we allow people who arrive on these shores and contribute to this nation to feel welcome as Americans. I hope this idea of America as a potluck nation takes off. This is a country that welcomes the contributions of people of all identities to the American table because if distinct communities do not contribute, the nation does not feast.