LONDON (RNS) — For generations of Jews, Britain has been a safe place to live: a country that made them welcome and that, during the Second World War, had been at the forefront of the fight against Nazism. But now many Jews are feeling a deep unease about new evidence of anti-Semitism in the country and especially about its existence within the left-wing Labour Party.

The row about anti-Semitism and the views of Labour’s leader, Jeremy Corbyn, has been brewing for months. But they reached a head this week when two of the most respected public figures in Britain – the former chief rabbi, Lord Jonathan Sacks, and veteran Labour MP and former government minister Frank Field – denounced Corbyn and what is happening to Labour under his watch.

First, Sacks, in an online article for the New Statesman magazine, called Corbyn “an anti-Semite” who “defiles our politics and demeans the country we love.”

On Thursday (Aug. 30), Field resigned the party whip — meaning that he no longer is committed to voting with the Labour Party in the House of Commons — and he accused the party of becoming “a force for anti-Semitism.”

In his letter of resignation, Field warned: “Britain fought the Second World War to banish these views from our politics but that superhuman effort and success is under huge and sustained internal attack.”

The tipping point for both men was recently revealed footage from 2013 in which Corbyn said that British Zionists had two problems: “One is they don’t want to study history and, secondly, having lived in this country for a very long time, probably all their lives, they don’t understand English irony.” 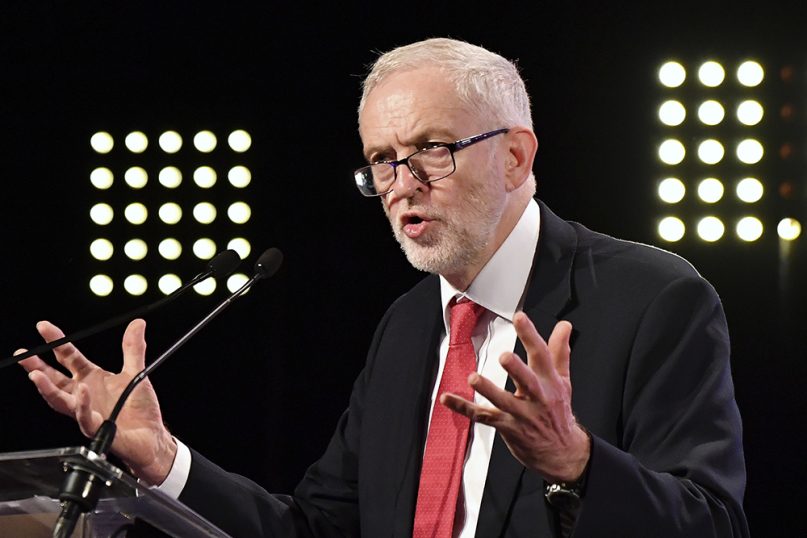 The clash, however, was just the latest in a series of incidents that have led some to brand Corbyn as antagonistic toward Jews. Over the summer, photos have surfaced of Corbyn attending rallies with anti-Israel organizations, and in July two MPs with Jewish connections were disciplined for criticizing Corbyn. Jewish Labour MPs have complained of being targeted by Corbyn’s supporters on Twitter.

Since July, too, the Labour Party has refused to embrace an internationally accepted definition of anti-Semitism.

The new accusations of racism also come at a time when incidents of anti-Semitism, ranging from insults to violence, have risen sharply.

According to the Community Security Trust, a charitable organization concerned with the safety of Jews in the U.K., there were 727 anti-Semitic incidents in the first six months of 2018. Mark Gardner, its director of communications, said there has been a steady increase in incidents since April 2016 in the run-up to the Brexit vote.

At the time, one of Corbyn’s key political allies, the former London mayor and Labour MP Ken Livingstone, suggested in a radio interview that Hitler was a Zionist – a claim thought to refer to the 1933 Haavara Agreement, which led to the migration of 60,000 German Jews to Palestine. 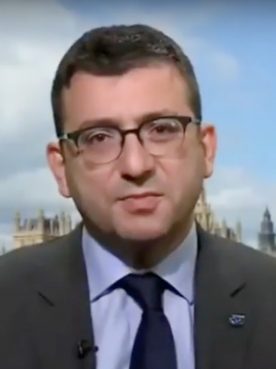 “Brexit has lifted the lid on racism,” said Gardner, “and anti-Semites can be emboldened when they hear what is happening in the Labour Party. Jeremy Corbyn is normalizing that behavior.”

The Community Security Trust and another group, the Jewish Leadership Council, put out a statement this week saying that Corbyn – who, as leader of the opposition, would become the prime minister were Labour to win the next British election — needed to publicly apologize for the hurt that Labour has caused the Jewish community. “Labour needs to undergo deep cultural change,” said Gardner.

The issue isn’t about to go away: Labour’s ruling body, the National Executive Committee, will meet Tuesday (Sept. 4) to discuss whether to fully adopt the International Holocaust Remembrance Alliance’s working definition of anti-Semitism, as governments and other official bodies around the globe have.

In July, the party rejected the IHRA’s recommendation that “Drawing comparisons of contemporary Israeli policy to that of the Nazis” be considered an example of anti-Semitism. Rather, Labour’s code only says, “Members should resist using Hitler or Nazi metaphors.”

Corbyn has also been reluctant to adopt the part of the IHRA code that offers as an example of anti-Semitism “Denying the Jewish people their right to self-determination, e.g., by claiming that the existence of a state of Israel is a racist endeavor.”

Much of the concern about anti-Semitism in the Labour Party, in fact, revolves around its leader’s antipathy to the state of Israel and his support for the Palestinians. Among the revelations of recent weeks was the emergence of a photograph taken in 2014 of Corbyn holding a wreath in Tunis, Tunisia, at a memorial to the bombers of the 1972 Munich Olympics. Eleven Israeli athletes died in that terror attack. Other memorials in the cemetery dedicated to Palestinian martyrs include one to Atef Bseiso, the PLO’s head of intelligence, who was allegedly killed by the Israeli secret service in revenge for the 1972 attack.

Asked whether he laid a wreath for the Munich terrorists, Corbyn said: “I was present when it was laid. I don’t think I was actually involved in it.” He added: “I was there because I wanted to see a fitting memorial to everyone who has died in every terrorist incident everywhere, because we have to end it. You cannot pursue peace by a cycle of violence. The only way you pursue peace is by a cycle of dialogue.”

One of Corbyn’s own MPs, Luciana Berger, who is Jewish, said he needed to apologize.

While Corbyn’s support for the Palestinian cause and his alleged anti-Semitism are likely to dominate the Labour Party conference – its annual convention starting on Sept. 23 – the issue is also affecting many Jewish people’s lives.

One group of Jewish Londoners who met this week to discuss the situation told Religion News Service that the Labour upheaval had heightened anxiety for Jewish people. One who wished not to be named out of fear of reprisal said, “I did not think about anti-Semitism until now but ever since this row in Labour started I think about it every day.” Edward Kessler in London on Oct. 20, 2016. Photo courtesy of the Foreign and Commonwealth Office/Creative Commons

Edward Kessler, a Jewish author and founding director of Cambridge’s Woolf Institute, which studies relations between religion and society, said Jews in Britain were taken aback by recent expressions of anti-Semitism and a few people had even considered leaving the country.

“Right across the Jewish community, people of all ages, practicing Jews and nonpracticing, have been shocked by what has emerged,” he said.

“Much of this originates in the hard left in Britain and their anti-Semitism is tied up with support for the Palestinian cause,” Kessler said. “But what tips this over for me into something else were the remarks Jeremy Corbyn made about Jews lacking English irony. It says we are the other; it’s a legitimization of racism.”

Kessler said that this was a moment for Jewish people to stand up and be heard. He was disappointed that while some Muslim organizations such as Tell Mama and Faith Matters had criticized Corbyn’s comments, there had been a lack of outspoken support from Christian churches.