(RNS) — Last year before the High Holy Days, we spent many hours in preparation with our daughter’s psychiatrist, and at home, planning how to occupy our 10-year-old daughter, Miriam, in synagogue. How would we — my husband and I and our other kids — take our shifts with Miriam, who would spend the long hours of the services mostly outside, playing endless imagination games, wandering from one playground to the next?

Mainly, we wondered, would she be able this time to play with the other kids for a while without bursting into the sanctuary in anguish over this or that child “who’s being mean to me,” and shouting “We’re going home now!”

Miriam is a special needs child. When she’s relaxed, she’s full of life, with an extraordinary sense of humor and a marvelous imagination. The rest of the time things are very hard for her, and for us. A recent study by a Clemson University researcher showed a special needs child can stress a family’s relationships with a house of worship as much as with each other.

A famous Hasidic story tells how one Yom Kippur, the Jewish calendar’s holiest day, in the synagogue of the legendary 18th-century Rabbi Israel Baal Shem Tov, a different sort of child, who wasn’t able to read or pray, was so moved by the service that he began to play his shepherd’s flute. The congregation was furious, but the great rabbi was overjoyed and told the congregants that this was just what God was waiting for, and what opens heaven’s gates.

For the parents of these different children, lessons like these are what help us to go on loving God and keep our heads above water.

On the morning of the second day of Rosh Hashanah, Miriam refused to get out of bed. It was hard for me to breathe. One of our children was being honored with leading services that morning and we had to leave home on time.

I remembered the psychiatrist’s admonition that all our children deserve our attention, but when Miriam has a panic attack, it’s just impossible. It always takes me a few minutes to wage the fight in my mind between despair and anger, mixed at times with hatred, mercy, and acceptance.

Once again I gathered strength from I don’t know where, for her “soul massage.” As everyone stood tensely by the door, I prepared Miriam the special breakfast she’d asked for. With the last measure of strength – I mean Miriam’s – she headed out with us, and then in synagogue as all the community began to sing the familiar melodies, she fell asleep on my lap. A large, heavy girl, in deep sleep.

The previous day, my husband had taken her home in the middle of services, and now it was my turn. I couldn’t take part in the special prayer and shofar-blowing that are the moving, joyous heart of the service. It took me a few moments to overcome disappointment and accept giving up. Dealing with the frustration used to be more difficult. Now I know it’s not her fault, that we’ve tried everything, that she’s a good girl, that we’re good parents, and that God … well, he’ll also have to wait.

On the way home I was sunk in thought when Miriam lifted her head to me and said, “Mommy, thanks for helping me deal this morning!”

The first time she’d ever said to me anything like that.

On Yom Kippur, Miriam decided to fast. According to Jewish tradition, she didn’t have to before her bat mitzvah, but she wanted to compete with her cousins and once she makes up her mind, it’s made up.

At synagogue, Miriam came and went, sometimes sitting next to me as she stared into space or fiddling with one thing or another – so it was only when I noticed the irritation of the people around me that at last Miriam had found herself something to do: With great concentration, she was blowing bubbles, until the synagogue looked like an episode of “My Little Pony.”

I couldn’t miss the aggravation people were shooting at me and I knew my moment of tranquility would soon end. But somehow it was so funny, so instead of squirming or getting embarrassed, I hugged Miriam, and we headed home at peace. 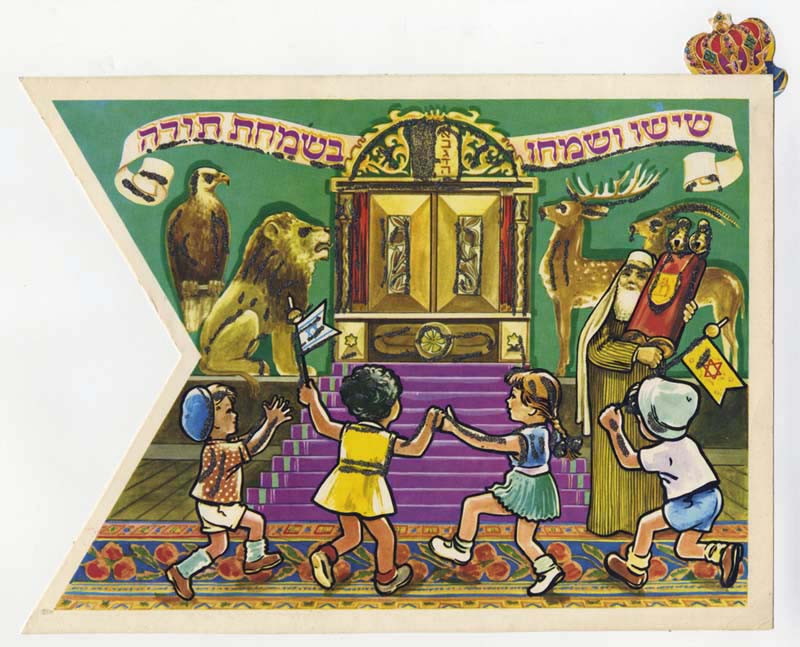 On Sukkot, in the middle of services, everyone stands for a beloved prayer called “Hallel,” a set of Psalms, sung with great joy. As soon as it began we all happily stood up, but Miriam didn’t want to join in, didn’t know what to do with herself, refused every suggestion. The tension in me grew by the moment. Miriam lay down on the chairs, made loud, threatening noises, pestered her sister and pushed me again and again.

I wondered again if maybe it was better not even to try, but to stay with her at home, and once again repress my urge to pray. I said my last hallelujah in bitter tears.

The last of the High Holy Days is Simchat Torah, the two-day celebration when we complete the annual cycle of Torah readings and immediately start reading the Torah scroll again from the beginning. The congregation spends the morning in enthusiastic circle dances, holding the heavy scrolls in members’ arms.

Miriam announced from the beginning that she wasn’t going to dance. But to our surprise, she suddenly joined in, and in a few minutes began to lead the dancing!

At first I didn’t know what was happening. I saw other women smiling and looking at her and one another, and before I had time to worry, I understood why. Miriam was reaching out beyond the circle and pulling more and more people into the dance. She nudged along seniors, poked people idling away in conversation with their friends, drew in children who stood wide-eyed in the bedlam, and people who seemed lost.

When the dancing was over, two other mothers came to me and said Miriam had so impressed them, that she was so amazing, and a role model for their kids.

My Miriam, a role model …

The other day of Simchat Torah, Miriam stayed at home. The dancing was in a larger hall, as members of five different congregations came together. I was happily dancing when I saw some mentally handicapped people who had come too. A disheveled man, planted firmly in place, staring at the dancers with a look I couldn’t understand. He drooled on his warm clothes in the suffocating room.

I knew I was acting dismally. I knew that this was the lesson I’d needed to learn during these special days. And I knew that if Miriam were there, this was one lesson she wouldn’t have had to learn.

Because at moments like these, she knows just what to do. My flute-playing bubble-blowing girl.

(Zohar Luria is a pseudonym. Other names in this essay were also changed for reasons of privacy. The views expressed in this commentary do not necessarily represent those of Religion News Service.)