A man is standing on his roof as floodwaters rise. A passing truck stops and the driver tells him to climb in, but the man declines, saying he has prayed and trusts God to save him. He turns down a boat and then a helicopter before the water overtakes him.

The punchline comes when, upon arriving in heaven, the man asks God why God hadn’t saved him, and God recalls sending a truck, a boat and a helicopter, saying, “Work with me.”

Locke, though, wasn’t delivering a sermon. 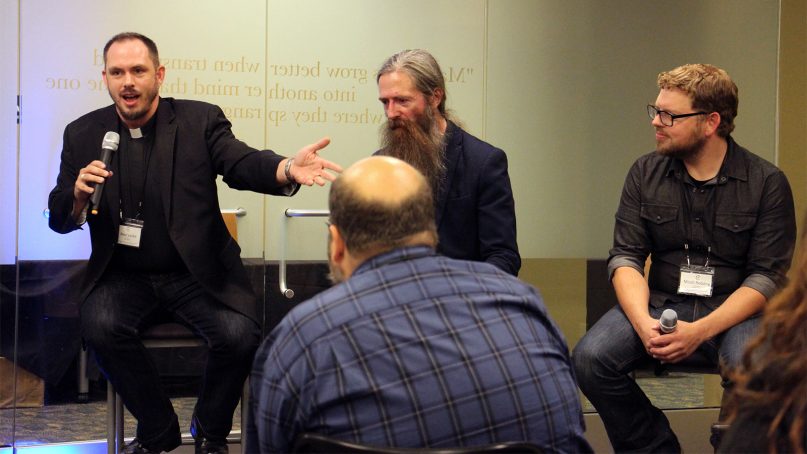 The Rev. Neal Locke, from left, Aubrey de Grey and Micah Redding participate in a panel titled “Should We Live to be 500?” during the Christian Transhumanist Conference in Nashville on Aug. 25, 2018. RNS photo by Emily McFarlan Miller

“It’s a conversation that calls us, that challenges us to develop a deeper theology of technology,” said Micah Redding, director of the four-year-old Christian Transhumanist Association.

“That then allows us to enter into these conversations about where technology is going, what it means to advocate for positive, relational values for our human future.”

The church’s interest in transhumanism is growing, according to Redding, who pointed to recent conferences on related topics in London and Vatican City. In turn, secular transhumanists have developed an interest in religion, including creating a religion of artificial intelligence.

But there’s also pushback from both sides.

And that comes, Redding said, from secular transhumanists who don’t see him as a “viable member of their community” as well as from Christians who believe “because of our association with transhumanism we are ushering in the Antichrist.” 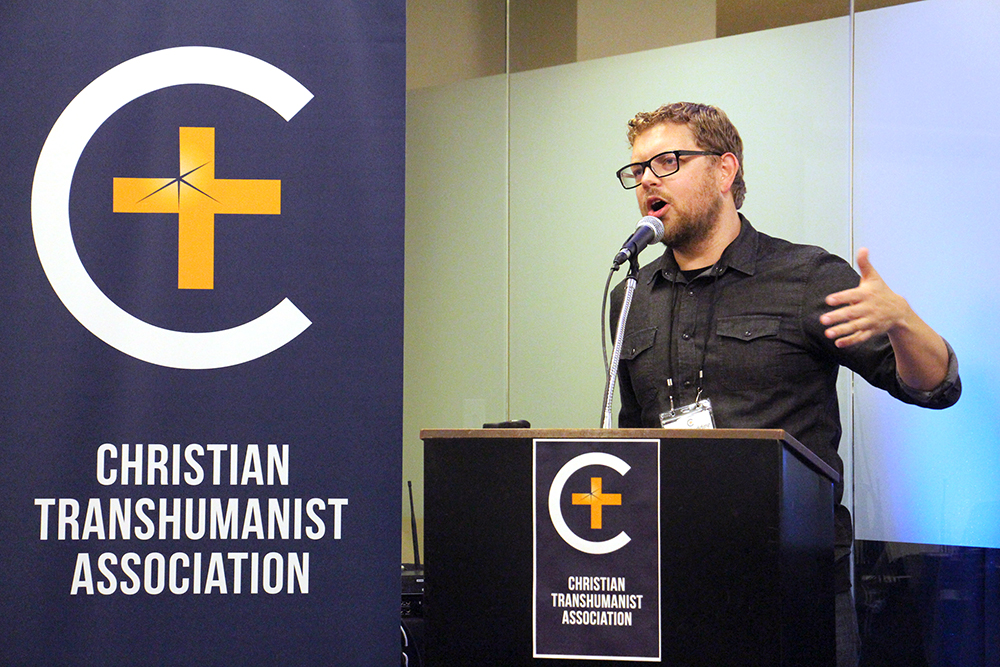 Transhumanists envision a future in which one’s mind will be downloadable and life spans will be considerably longer, if not infinite. In biblical parlance, they imagine a time when the blind will receive their sight and the lame walk.

Neuroscientist Stephen Helms Tillery, associate professor of bioengineering and a fellow of the Lincoln Center for Applied Ethics at Arizona State University, is developing some of the kinds of technology that transhumanists cite — namely, neuroprosthetics that interface the nervous system to computer systems. 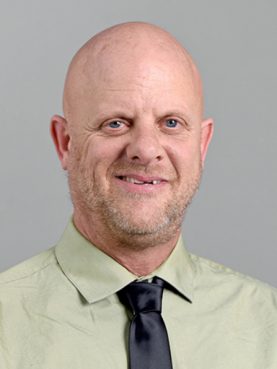 Helms Tillery’s work may soon allow scientists to create a robotic arm that can be controlled by thought or a prosthetic hand with sensors that could feel touch, and, he said, “There’s no reason to think they can’t be applied in a more broad sense for interfacing with computers.”

“The kinds of advances that transhumanists are concerned about are already happening, but in a much more prosaic way. They’ve been going on for 50 years,” Helms Tillery said.

Russell Moore, head of the Southern Baptist Convention’s Ethics and Religious Liberty Commission, also is skeptical about the interface between transhumanism and Christianity, telling Religion News Service: “There could no more be a Christian transhumanist society than a carnivorous vegan society. The two are completely contradictory.”

That’s because, Moore said, the Bible begins with humanity made in the image of God and continues with that narrative through the incarnation of Jesus, whom Christians believe to be both God and man. Transcending humanity, then, is “contradictory to the biblical story at every point.”

“Scripture tells us how to transcend death, and it’s not through our own technological prowess,” he said.

Moore generally believes technology to be a good thing and doesn’t want to be an alarmist; he remembers Christians in the 1980s fearing that supermarket scanners somehow led to the “mark of the beast” described in Revelation. But, he said, ideas such as transhumanism present gray areas Christians need to be thinking through — before they’re reality.

Bringing these two views of transhumanism into conversation is exactly what the Christian Transhumanist Association director said he wanted to do at the Nashville conference, which drew about 130 attendees and speakers from diverse faith backgrounds. They discussed what it means to be human, whether humans can and should live to be 500 and whether humans actually are living in a simulation.

Those are “awkward” and “unusual” conversations, Redding admitted.

“If we’re not making you a little uncomfortable, we’re probably not doing our job. We probably haven’t brought enough weirdness into the room,” he said.

Like Redding, many at the conference embraced both transhumanism and faith unreservedly.

Blaire Ostler, a board member and former CEO of the larger and older Mormon Transhumanist Association, first encountered transhumanism four or five years ago, and “it was love at first sight,” she said.

Ostler, who writes and speaks on the intersections of her identities as queer, transhumanist and a member of the Church of Jesus Christ of Latter-day Saints, said she was at a point where she valued her faith but was disillusioned by the institution of the church. Transhumanism gave her a way to put her faith into action. 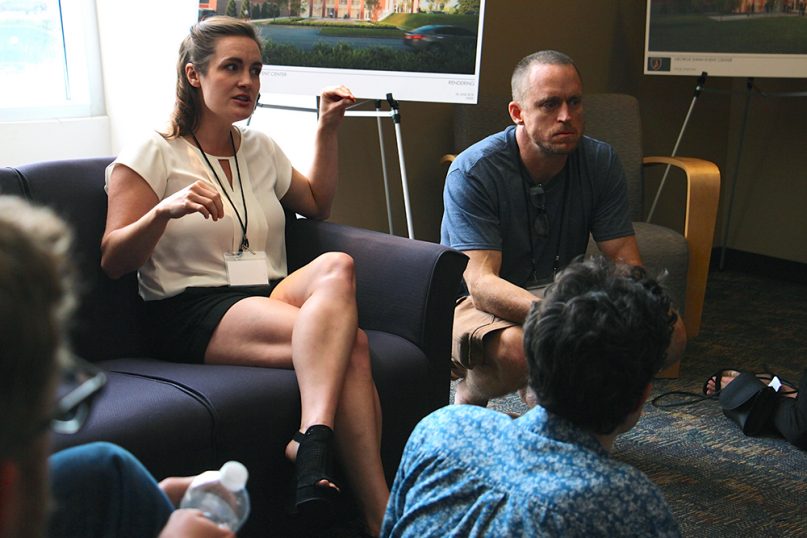 “Transhumanism really brought it to life: This is how we do it. This is what we do. We believe, now we do, and I really like that about it,” she said.

It fit well into Cheyenne Medders’ faith, as well. Medders, a member of the Church of Christ and a Nashville musician, came to the conference after joining Christian Transhumanist Association discussions online.

He doesn’t see the two beliefs as contradictory; in fact, he said, as humans and artificial intelligence become smarter, he believes they will converge on truth, and truth is of God.

Keynote speaker Aubrey de Grey is co-founder of the SENS Research Foundation, which is working to extend life spans by finding ways to repair damage caused by aging. De Grey identifies as agnostic, but issues such as radical life extension sound to him “like the type of thing the Bible tells us we ought to be fixing if we can,” he said. 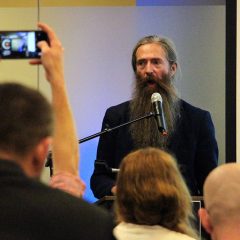 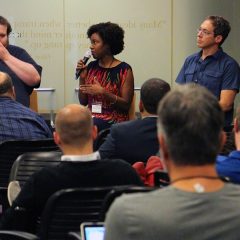 Ben Howard, from left, Kimberly Lannear, Lee Camp and Scott Hawley participate in a panel titled “How Is Technology Disrupting Faith?” during the Christian Transhumanist Conference in Nashville on Aug. 25, 2018. RNS photo by Emily McFarlan Miller 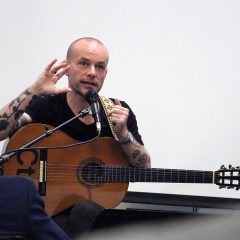 Derek Webb plays songs from his concept album “CTRL” and discusses art’s ability to help us imagine the impact of new technologies during the Christian Transhumanist Conference in Nashville on Aug. 25, 2018. RNS photo by Emily McFarlan Miller 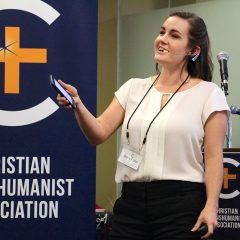 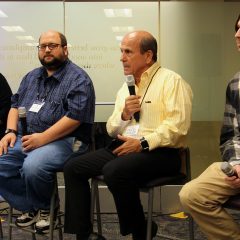 J. Jeanine Thweatt, from left, Braden Molhoek, Fred DeFalco and Buckley Roe participate in a panel on “What Does It Mean to Be Human?” during the Christian Transhumanist Conference in Nashville on Aug. 25, 2018. RNS photo by Emily McFarlan Miller 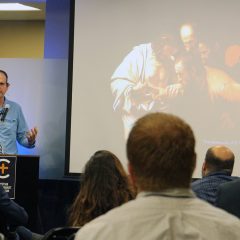 Jonathan Gunnell presents on “Simulation Theory and the Implications for Christianity” at the Christian Transhumanist Conference in Nashville on Aug. 25, 2018. RNS photo by Emily McFarlan Miller “Aging doesn’t just kill you. It kills you slowly after this long, extended, ghastly period of decrepitude, disease, dependence and debilitation and general misery, following which you die. … It would be a cardinal sin not to work on defeating aging,” he said.

Other secularists seemed to leave equally open-minded about the Christian viewpoint. Javier Irizarry, of the Atlanta chapter of the Society of Hispanic Professional Engineers, said he is an atheist, but he noted many Americans are Christians, especially among the Hispanic population he represents with SHPE, and “it’s important to know how to address this transhumanist subject with them.”

“It’s for everybody — religious and nonreligious — so we have to work together on this.”

(This story was written with support from a Templeton Foundation grant.)