(RNS) — Last month, after Pennsylvania Attorney General Josh Shapiro unveiled a bombshell 1,300-page grand jury report detailing the alleged sexual abuse of more than 1,000 children in his state by hundreds of Catholic priests, American Catholics called for more investigations into church documents. Some even demanded the federal government step in.

On Thursday (Sept. 6), The Associated Press reported that New York Attorney General Barbara Underwood has subpoenaed all eight Roman Catholic dioceses in the state to investigate the church’s handling of sex abuse allegations. New York Archdiocese spokesperson Joseph Zwilling later confirmed to Religion News Service that that diocese has received the subpoena and is “ready and eager to work together with (the attorney general) in the investigation.”

Previously, the Diocese of Buffalo told RNS it “will cooperate with any investigation initiated by the New York State Attorney General or District Attorney,” and the Diocese of Albany invited the local district attorney to review its files on Thursday.

The New Jersey attorney general also announced on Thursday the creation of a new task force to investigate Catholic dioceses of New Jersey. According to NJ.com, the body will have subpoena power through a grand jury to compel testimony and demand documents from church officials.

“The (Pennsylvania) report revealed that sexual assaults on children – and efforts to cover up such assaults – were far more widespread in Pennsylvania than we ever thought possible,” read a statement by New Jersey Attorney General Gurbir S. Grewal. “We owe it to the people of New Jersey to find out whether the same thing happened here. If it did, we will take action against those responsible.”

Due to differing legal systems from state to state, the investigations promise to be tailored to the varying powers of the states’ attorneys general and the states’ history of investigating abuse claims. Some states’ dioceses have already been investigated or have long-standing agreements with law enforcement.

Nebraska’s attorney general also sent a letter to the state’s three dioceses requesting records going back 40 years, to Jan. 1, 1978. When RNS contacted the Archdiocese of Omaha last week asking about a hypothetical inquiry, the diocese said it would “allow the attorney general to review our files.”

New Mexico Attorney General Hector Balderas unveiled his office’s inquiry on Wednesday evening, sending 10-page letters “in contemplation of litigation” and legal demands to dioceses asking to review any church records related to past or present allegations of sexual abuse.

“(Balderas) has sent investigative demands to all three dioceses in New Mexico requiring full disclosure and full transparency,” David Carl, a spokesperson for the attorney general’s office, told RNS in an email. “The Catholic Church in New Mexico needs to fully reconcile and support survivors by revealing the magnitude of sexual abuse and subsequent cover up by church leaders in order to restore faith and trust in the community.”

One of those dioceses, the Diocese of Gallup, has already pledged to work with the attorney general.

“We look forward to cooperating with the Attorney General to ensure the safety of all the members of our diocese,” read a statement from the diocese. 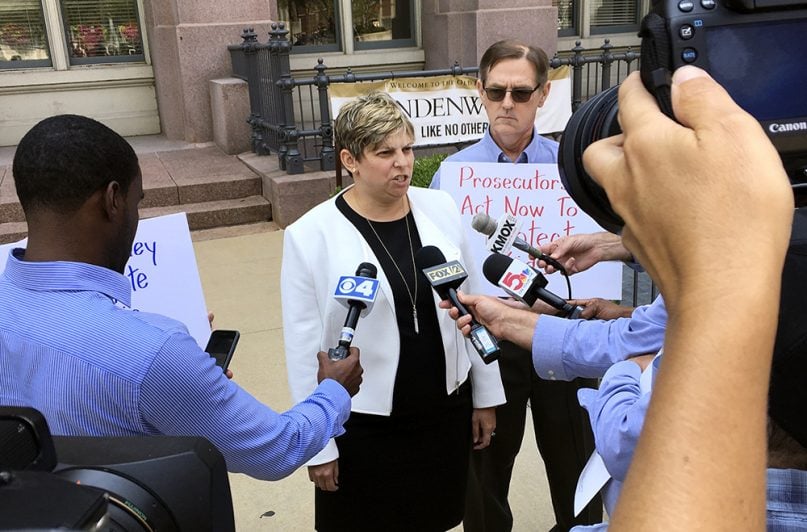 Attorney Nicole Gorovsky speaks to reporters in St. Louis on Aug. 22, 2018, with clergy sex abuse advocate and victim David Clohessy by her side. Gorovsky, Clohessy and Mary Ellen Kruger spoke outside the St. Louis office of Attorney General Josh Hawley, calling for a wide-scale investigation of sex abuse by priests in Missouri. (AP Photo/Jim Salter)

In Florida, Attorney General Pam Bondi told RNS in August that “my statewide prosecutor is reaching out to all of the state attorneys to explore the matter.”

Bondi’s office declined to comment further this week, saying it would not remark on an ongoing matter. But at least one Florida diocese indicated that the effort has moved past the exploration phase and into a full inquiry.

“The Diocese of St. Petersburg has been contacted by the statewide prosecutor from the Attorney General and will cooperate with the inquiry,” a diocesan representative told RNS in an email.

The dioceses of Venice, St. Augustine, Pensacola-Tallahassee and Palm Beach also confirmed they would cooperate with any inquiry made by Florida law enforcement or the attorney general. A representative from the Archdiocese of Miami did not mention any ongoing investigations but said state attorneys had already reviewed all of the Miami and Broward County dioceses’ clergy files in 2002.

In Missouri, the Archdiocese of St. Louis voluntarily offered up its files on Aug. 23 for inspection by state Attorney General Josh Hawley. The proposal was unusual: The jurisdiction for child sex abuse crimes in Missouri technically lies with an elected local prosecutor.

But since the archdiocese offered up the files voluntarily, Hawley agreed, and he announced a formal “independent review” of the files by his office. The Diocese of Kansas City-St. Joseph, another diocese in the state, promptly declared it would also “cooperate with any review the attorney general requests.”

The trend spread: A spokesperson for the Diocese of Jefferson City told RNS it is “working with the Missouri attorney general in having a review of our files, along with the other three Missouri arch/dioceses, which include St. Louis, Kansas City-St. Joseph and Springfield-Cape Girardeau.” 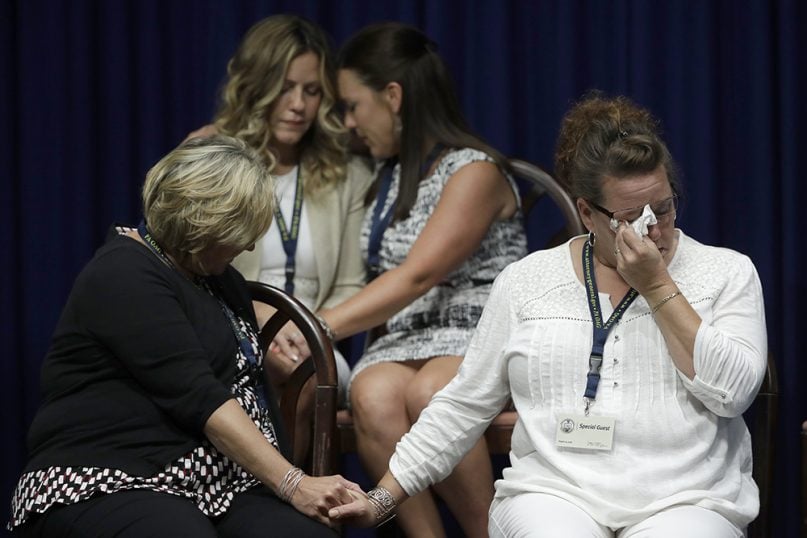 Victims of clergy sexual abuse, or their family members, react as Pennsylvania Attorney General Josh Shapiro speaks during a news conference at the Pennsylvania Capitol in Harrisburg on Aug. 14, 2018. (AP Photo/Matt Rourke)

Meanwhile, in Illinois, Attorney General Lisa Madigan announced plans last month to meet with the Archdiocese of Chicago and reach out to the other dioceses in Illinois, saying she “expect(s) the bishops will agree and cooperate fully.”

She said in a press release that if dioceses refused to comply, she would “work with states’ attorneys and law enforcement throughout Illinois to investigate.”

A spokesperson for the attorney general’s office said the probe was triggered by the Pennsylvania grand jury report.

“It really is in direct response to the report that named at least seven priests that had a direct connection to Illinois at some point,” the spokesperson said.

The Archdiocese of Chicago said it plans to meet with the attorney general but claimed law enforcement officials reviewed its clergy files three times — in 1992, 2002 and 2015 — and noted that files detailing allegations of abuse by priests are already published on the archdiocese’s website.

“We have been contacted by the Illinois Attorney General and look forward to discussing our policies and procedures related to misconduct issues with her and her office,” read a statement from the archdiocese. “We have worked cooperatively with the Cook County and Lake County State’s Attorneys for many years.”

Other Illinois dioceses offered similar answers but declined to comment further for fear of interfering with the attorney general’s effort.

It remains to be seen whether any of the state-level inquiries will produce the kind of bombshell that came out of Pennsylvania, and it’s unclear what, if any, new allegations will surface.

But for now, the broader trend of investigating the American Catholic Church seems far from over.

(This story has been updated to include new reports of investigations in Nebraska, New York and New Jersey.)