(RNS) — Not long ago, the future looked grim for Temple Beth El in Hackensack, N.J.

The building needed a new roof. The heating and cooling systems were failing. And the congregation had dwindled to fewer than 50 people who could not afford to make repairs and keep their building open.

Congregation members feared the synagogue would be closed and sold off, like many other aging houses of worship.

Instead, members of Beth El decided their synagogue needed a new start. The congregation partnered with Chabad-Lubavitch, an Orthodox Jewish organization, to repair the building and give the synagogue a shot at new life.

At a time when many decommissioned houses of worship are converted into nightclubs, restaurants, and even condominiums, there’s a different kind of transformation in places like Hackensack.

Dwindling congregations are being “replanted” with new ones.

In Kansas City’s Brookside neighborhood, the Wornall Road Baptist Church had a sanctuary that could seat 610 people. But only 18 or so showed up on Sunday mornings before a Southern Baptist pastor came in to lead a “legacy church plant” and give the congregation new life.

Sometime next year in Garden Grove, Calif., about a mile from Disneyland, the one-time Crystal Cathedral built by the late Rev. Robert H. Schuller from a design by Philip Johnson and John Burgee, will officially become Christ Cathedral of the Roman Catholic Diocese of Orange.

Not every conversion takes place in the same manner. Few are as dramatic as the fall and rebirth of former Crystal Cathedral, once a Reformed Church in America megachurch. But other examples reveal a growing desire to keep houses of worship within the tradition in which they were originally established, even if the founding congregation has diminished.

For Norton Segal, a Montreal attorney and president of Congregation Zichron Kedoshim there, partnering with Lubavitch to revive a dwindling congregation was better than selling off their downtown property to real estate developers.

“We’re just a very active, heartwarming synagogue as opposed to being a condominium,” he said. “This was one of the best decisions I’ve made in my life.” 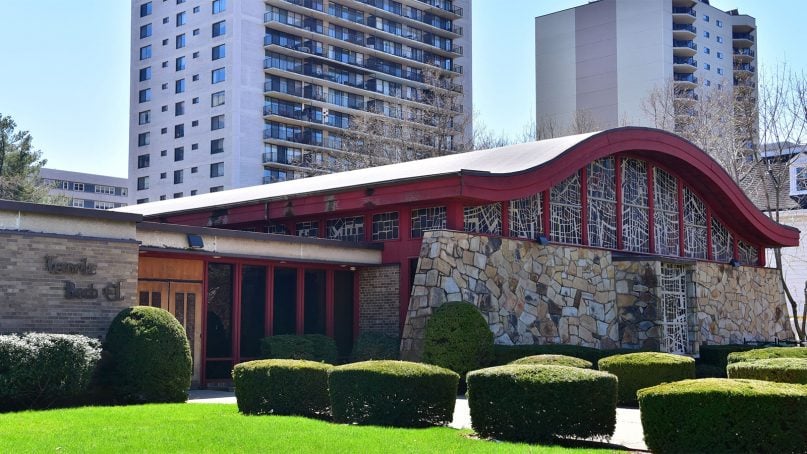 A similar decision resulted in the renovation of Temple Beth El, a conservative Jewish congregation that was descended from the century-old Hackensack Hebrew Institute, an Orthodox one.

The temple building, constructed in the late 1960s adjacent to Hackensack University Medical Center, had fallen into serious disrepair as its membership fell below 50 people.

Carolyn R. Kristal, a Fort Lee, N.J., attorney whose parents were instrumental in constructing the temple, feared what might happen next.

In Bergen County, she said, Jewish synagogues have been sold off and turned into churches.

“I did not want that to happen to this edifice that my parents helped build,” she said.

Here, too, Chabad stepped in, fronting the cost of major repairs to the building’s roof, HVAC system, and other items. For now, Chabad shares the building with the Beth El congregation, but the facility will become a Chabad center in three years.

Temple Beth El’s leadership “could have sold it to become a church or mosque but wanted to keep it Jewish,” said Rabbi Ephraim Simon, the regional Chabad director, based in Teaneck.

For Chabad, a rapidly growing movement whose most prominent leader was the late Rabbi Menachem M. Schneerson, the motivation is to use these existing buildings to reach Jews in the community.

According to Rabbi Chaim Landa, a Lubavitcher spokesman in Brooklyn, N.Y., Schneerson “insisted that Judaism be made accessible to all Jews, which translates into different things for different people, such as a nonjudgmental atmosphere, affordability of the services or the ability for a beginner to follow along. The goal is to lower the barriers of entry, and encourage each and every Jew to actively participate in services and programs.”

At least two other Jewish congregations — in Philadelphia and in San Francisco — have transferred ownership to Chabad, Landa said. All are what he called “aging congregations,” but have come from Reform, Conservative and Orthodox branches of Judaism, he said.

“Chabad is very opportunistic,” Rosen said. “When they see a chance to reach Jews, they will operate there. In Boston, Chabad of the North Shore, in Swampscott, is involved with a synagogue in Lynn that was once Orthodox, has dwindled, and now they’re taking over.”

Rosen said the movement’s personal connections with people account for its growth: “Chabad comes in and they love every Jew and they’re just accepting. They’re 24/7. It’s no wonder that people respond to that.” 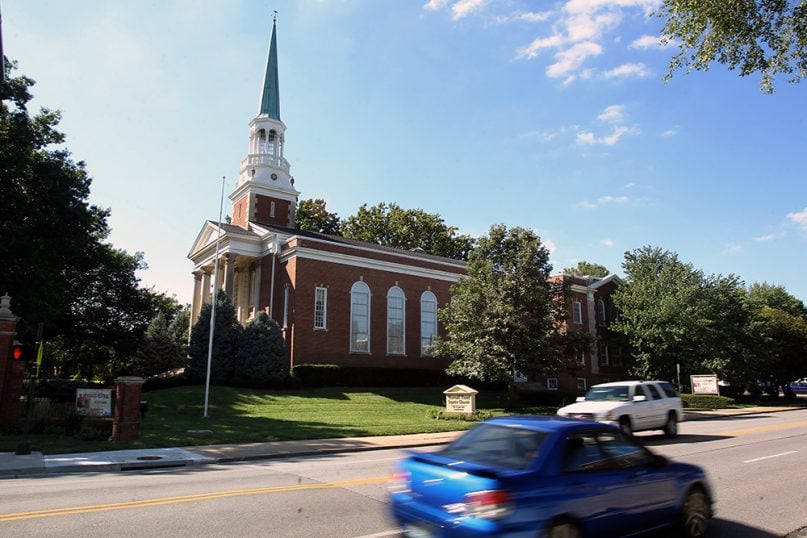 In some congregational reboots, the building is in fine shape, but the congregation needs a new focus, said Mark Clifton, senior director of church replanting for the Southern Baptist Convention’s North American Missions Board.

That was the case for Wornall Road Baptist. Although the church building didn’t need major renovations, its outlook did, Clifton said.

“We began to look at the neighborhood through missionary lives,” Clifton said. “We asked, ‘How can we serve these people?’ One of the main ways we define success is whether the neighborhood is noticeably better because the church is here.”

The new congregation made the facility available to the neighborhood when worship wasn’t taking place. Its members fed football players from a nearby high school every Friday night and got involved with the elementary school across the street.

Wornall Road also held an annual memorial service for murder victims in the community, placing memorial crosses on the church lawn. The goal: to let victims’ families know they were not forgotten.

A side benefit, Clifton said, was that young adults in the community became interested in the 100-year-old church.

“Young people appreciate that we don’t destroy old buildings; we conserve them and preserve them,” he said. “It’s nice to have something that’s been there for 100 years and still has an impact on the neighborhood.”

He said these “legacy church plants” are becoming more normal among Southern Baptists, and may number as many as 300 in a given year.

“One of our primary purposes is to change the narrative,” Clifton said of the denominational project. “We want to reclaim these churches for God’s glory, to reclaim and redeem a building.”

Redeeming a building took on a special meaning for the Orange County diocese when it came to the Crystal Cathedral, communications director Hank Evers said. 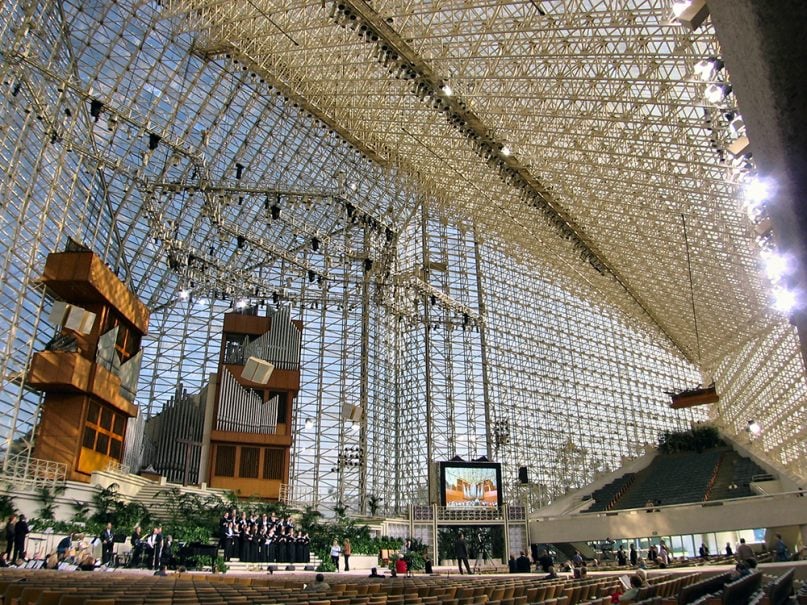 The interior of the Crystal Cathedral in 2005. The Roman Catholic Church bought the property and renamed it Christ Cathedral. Photo by B. Kuderer/Creative Commons

The late Roman Catholic Archbishop Fulton J. Sheen had preached at the cathedral and St. John Paul II had blessed the project during a papal audience with Schuller, who had brought the plans for the Crystal Cathedral campus with him on a visit to Rome.

While the diocese is in the midst of renovations to transform the former Protestant megachurch building into a Catholic cathedral, the diocese is utilizing the 22,000 square-foot arboretum, designed by the late architect Richard Neutra, for a range of weekly services on the campus.

“The arboretum will seat 1,100 people,” Evers said. “It’s now a parish and has up to 11 Masses on the weekend. Attendance somewhere around 13,000 people. Each Mass — English, Spanish, Vietnamese—is standing room only.”

Evers said the campus is in constant use — a cultural center building served as a set for Starfleet Command in a recent “Star Trek” movie — for a variety of tasks. “We have events here constantly. We have drama series, plays, speakers, concerts. It goes on and on and on.”

Of the acquisition, he said: “I believe it was providential. The hand of God has been on this since the very first day.”