(RNS) — Anyone interested in religion and politics in the U.S. needs to reckon with Ronald Reagan, whose presidency marked the emergence of the religious right onto the national scene. That white evangelicals in 1980 should have turned away from Jimmy Carter, the Southern Baptist Sunday school teacher they had backed four years earlier, to support a nonchurchgoing, divorced Hollywood actor was a remarkable and portentous moment in American political history.

Evangelicals have shown themselves capable of voting for candidates who exhibit few of the virtues they require of leaders, not least the current president. But Reagan was the first such candidate, and many still wonder if Reagan was merely an opportunistically seized vessel for the nascent movement of social conservatism that has reshaped American politics.

The answer is no.

Washington Post columnist Karen Tumulty has come up with a hitherto unknown document that shows Reagan the president to have been a man of deep, traditional Protestant faith. It’s a letter he wrote from the White House to his father-in-law, Loyal Davis, when Davis was on his deathbed in August of 1982.

Davis, a leading neurosurgeon, was a nonbeliever. Reagan, who was very attached to him, used the letter to try to convince him of the truth of the Christian understanding of Jesus and the world to come. To gain “a greater life, a greater glory,” he concludes, “all that is required is that you believe and tell God you put yourself in his hands. Love, Ronnie.”

With its quotations from Scripture, its appeals to biblical prophecy and its expression of personal belief, the letter makes clear that Reagan had lost none of the faith that had shaped him in his youth.

Although Reagan’s father was a Roman Catholic and his parents married in a Catholic church, his mother had herself baptized into the Disciples of Christ the year before he was born and brought him up in the church. The Disciples emerged from the early 19th-century Restoration Movement, which was devoted to recovering the basic tenets and practices of the early church. Hoping to transcend denominationalism, they insisted on calling themselves just “Christians.” 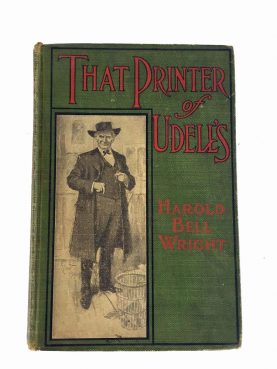 At the age of only 11, Reagan decided that he was ready to be baptized as the result (he later recalled) of reading “That Printer of Udell’s,” a novel published in 1902 by a devout Disciple named Harold Bell Wright.

Written in the spirit of Charles Monroe Sheldon’s 1897 best-seller “In His Steps,” “That Printer of Udell’s” advances a conservative social gospel program of helping the poor, but with distinctly restorationist elements. It is laced with criticism of doctrinal differences among the Protestant churches, and in contrast to Sheldon’s focus on the regeneration of individuals, Wright is concerned to show how Christ-like activity can make one’s community into a model for others.

The story centers on Boyd City, a prosperous Midwestern industrial town suffering from the ills of urban life — alcohol, gambling and prostitution. Thanks to the efforts of two men, a noble journeyman printer of lower-class origins and the pastor of “Jerusalem Church,” Boyd City is by the end of the novel transformed into “an example to all the world, for honest manhood, civic pride and municipal virtue.”

The influence of the Disciples only increased after Reagan formally joined his hometown church as a pre-adolescent. The minister, Ben Cleaver, became a kind of surrogate father, giving him advice, teaching him to drive, and helping him get into Eureka College, the Disciples’ institution of higher learning in Illinois.

There can be little doubt that Reagan’s adult worldview harked directly back to what historian Joe Creech has termed the Disciples’ “unashamed city-on-the-hill patriotism.” In other words, it was no accident that Reagan’s favorite political trope was to equate America with the city Jesus evokes in the Sermon on the Mount, “Ye are the light of the world. A city that is set on a hill cannot be hidden.”

Not that Reagan came up with this himself. Its source in American rhetoric is the well-known address given by John Winthrop to the Puritans embarking for Boston aboard the Arbella in 1630. In latter-day political discourse, it was employed by President-elect John F. Kennedy in a speech to the Massachusetts Legislature in 1961.

But Reagan made it his watchword, using it in announcing his candidacy for president in 1979, in accepting the Republican nomination in 1984 and in bidding farewell to the nation in 1989. The image perfectly embodied his project of restoring America after the country’s defeat in Vietnam and the so-called malaise of the Carter years.

Being a city on a hill meant serving as that “light unto the nations” that the prophet Isaiah identified as Israel’s special role in the world and that antebellum restorationists had long since attributed to America.

As Reagan put it in his 1979 announcement, “A troubled and afflicted mankind looks to us, pleading for us to keep our rendezvous with destiny; that we will uphold the principles of self-reliance, self-discipline, morality, and, above all, responsible liberty for every individual that we will become that shining city on a hill.”

Let’s acknowledge that this ideal was not grafted by Reagan onto his political program as a mere rhetorical device. It was rooted in his own religious identity. One might say that his first city on a hill was Boyd City.

Nothing better expresses his restorationist vision than Reagan’s famous 1984 campaign ad, “Morning in America,” which was expressly designed to convey the idea that under him the nation had experienced a new beginning — or more precisely, was re-experiencing its beginning: “It’s morning again in America,” the voice-over intones. “Why would we ever want to return to where we were, less than four short years ago.”

Donald Trump’s “Make America Great Again” is a coarse version of the same message. Its protagonist may lack his predecessor’s religious underpinnings, but the evangelicals are still behind him.