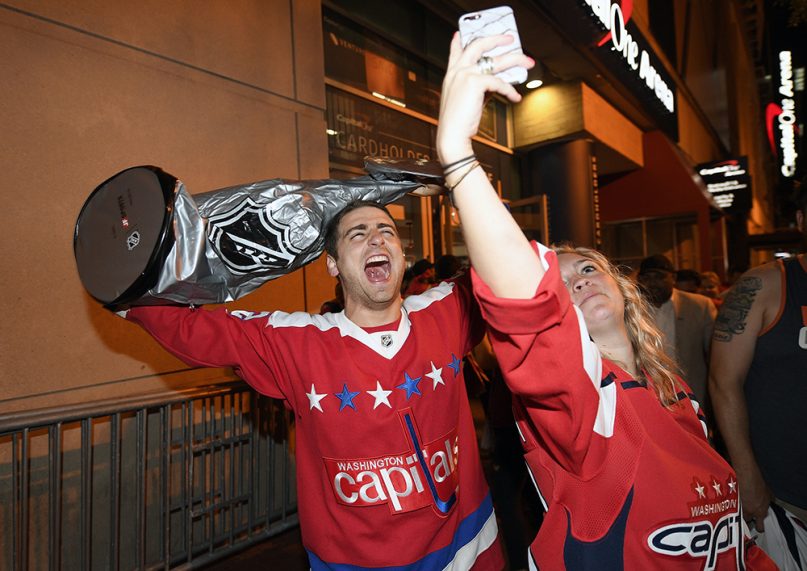 (RNS) — Amy Defibaugh was raised as a Presbyterian, as was her longtime partner, Jeremy Gillam.

But it wasn’t religion that helped cement their initial bond: It was hockey.

Having grown up just outside of Washington, D.C., Defibaugh, now a doctoral candidate in religion at Temple University, is a staunch Capitals fan. Gillam, a native of suburban Philadelphia, is the life skills and healthy living coach for the Philadelphia nonprofit Snider Hockey. He is also a committed Flyers booster.

Though avid fans, they don’t let it come between them.

It might get a little “tense” around playoff time, if their two teams are in the running, said Defibaugh. But the nerves are never directed at their partner, she said.

These days, neither is currently affiliated with a religious institution. Gillam described himself as “spiritual” and said he tries to find ways to integrate the principles of Eastern religions such as Buddhism as well as Christianity into his daily life. Defibaugh said her personal practice is focused now on home rituals.

“For me, it (fandom) has a lot to do with community and belonging, whether it’s imagined or not,” said Defibaugh.

In their passionate attachment to their sports “families,” Gillam and Defibaugh are by no means unique. As religious attachments have waned as a determinant of whom Americans choose to pair with, team loyalty has persisted.

For a sizable number of Americans, agreeing with their partner about sports is more important than agreeing about religion, according to an online survey about relationships conducted last spring for Fathead, a company that sells oversized wall decorations of sports stars and other pop culture.

The survey found that approximately 25 percent of women and 41 percent of men said it was more important to have a partner who rooted for the same team than one who shared the same religious perspective. 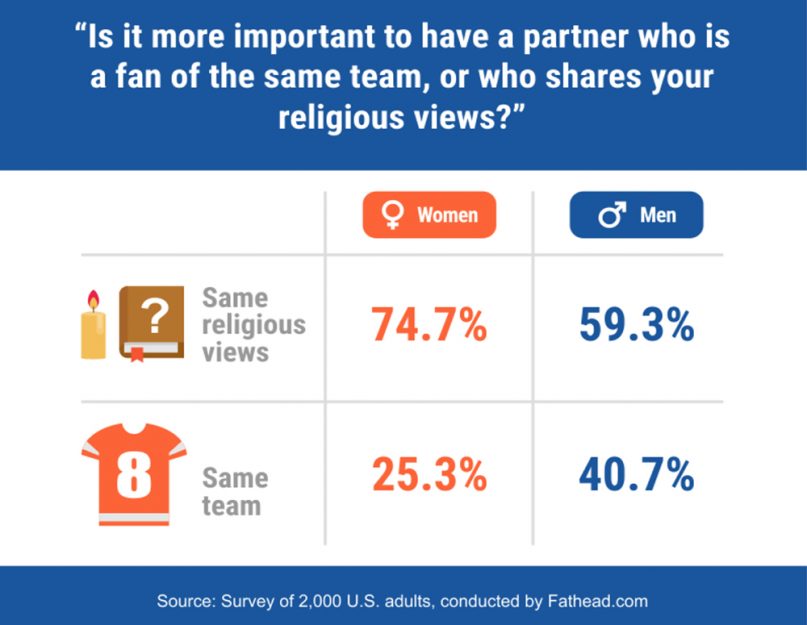 “Is it more important to have a partner who is a fan of the same team, or who shares your religious views?” Graphic courtesy of Fathead.com

While close to 80 percent of women preferred to share like political views than allegiance to a particular team, that number dropped to approximately 70 percent for men.

Approximately 38 percent of men and 28 percent of women polled would be willing to make substantial sacrifices, such as adding 20 minutes to their daily commute, if it would change how much their partner cared about sports — more or less.

Roughly the same share of men would be willing to add 10 pounds to their frame (far fewer women felt the same).

The survey of 2,013 people was conducted in April 2018 and included people across the nation. Just over half were men. Just under half were married. The company did not include a margin of error in its methodology explanation.

More than a third of respondents said that fandom was a net positive for their relationship.

“When we were looking at things that were very important to people, part of their identity and cultural touchstones, religion and politics were not just what they do on weekends, but what they believe and value,” said Fathead data analyst Cindy Glover.

Temple University religion professor Rebecca Alpert, who has written extensively on the intersection of sports and faith, said Fathead’s results reflect how sports has replaced faith in some ways. “We see ourselves as spiritual, but we have a broad definition of spirituality.”

Though fewer Americans are affiliated with faith-based institutions than in the past, Alpert said, “we’re a religious people, and those impulses have to go somewhere.”

New York Times journalist Kenneth Vogel, who grew up in the Philadelphia area, said in an email that he is a “passionate” local team fan.

While Vogel and his wife, Danielle, the owner of Glen’s Garden Market, a D.C. grocery and eatery, bonded over shared Jewish roots, sports didn’t play any part in their courtship, he said.

“Even though she would occasionally accompany me to games, she mostly just tolerated my Philly sports fanaticism with a sense of bemused wonderment,” he recollected. “But, as Tom Brady’s Hail Mary pass fell incomplete at the end of Super Bowl 52, sealing the win for the Eagles and sending me and the rest of the Eagles fans in attendance into a cathartic euphoria, she turned to me and said, ‘I get it now. I want to be an Eagles fan.'”

That “conversion” moment was one of the best parts of the whole Super Bowl experience, he said.

Some enthusiasts blur the line between faith and fandom altogether. “I believe sports is religion,” Gotham Chopra, a documentary producer who co-founded the media company Religion of Sports, wrote in an email.  “Most of the things that we identify with religion exist in sports.”

Chopra cites pilgrimages to “sacred sites” like Fenway Park or Lambeau Field, and the community not only with our partners or family members but with history. “As a fan we become part of something bigger than ourselves,” said the New England Patriots fan.

When the Red Sox broke the “curse” of an 86-year World Series championship drought, Chopra said, it constituted a “veritable miracle” — except that the Sox’s win was real, he added. Sports, he said, “don’t require blind faith or subscribing to dogma. The dirt track, the rec league: these are the sports churches in our communities, where people don’t have to go and sit in the pews to experience the faith. They can go and actively be a part of something bigger than themselves.”

Though he “lives and dies” with every Patriot win or loss, his wife, more of a “passive fan,” is tolerant of his passion, but only tunes in when there is an important game, added Chopra. “She’s the one sitting on the outside of the faith rolling her eyes when she sees how obsessive and emotional we become. And that’s probably a good thing!”

Opinion
Nike, don’t make me choose between Liverpool FC and the Uighurs
Faith
Tom Brady’s leap of faith
News
The Friars’ Briar — Canada’s clergy curling tournament — puts faith and fellowship on ice
Islam
A Muslim women’s netball team brings competition — and a sense of inclusion
Home Top Three
NFL’s Saints fight to shield emails in Catholic abuse crisis
© Copyright 2020, Religion News Service. All rights reserved. Use of and/or registration on any portion of this site constitutes acceptance of our User Agreement and Privacy Policy, Privacy Statement and Cookie Notice. The material on this site may not be reproduced, distributed, transmitted, cached or otherwise used, except with the prior written permission of Religion News Service.