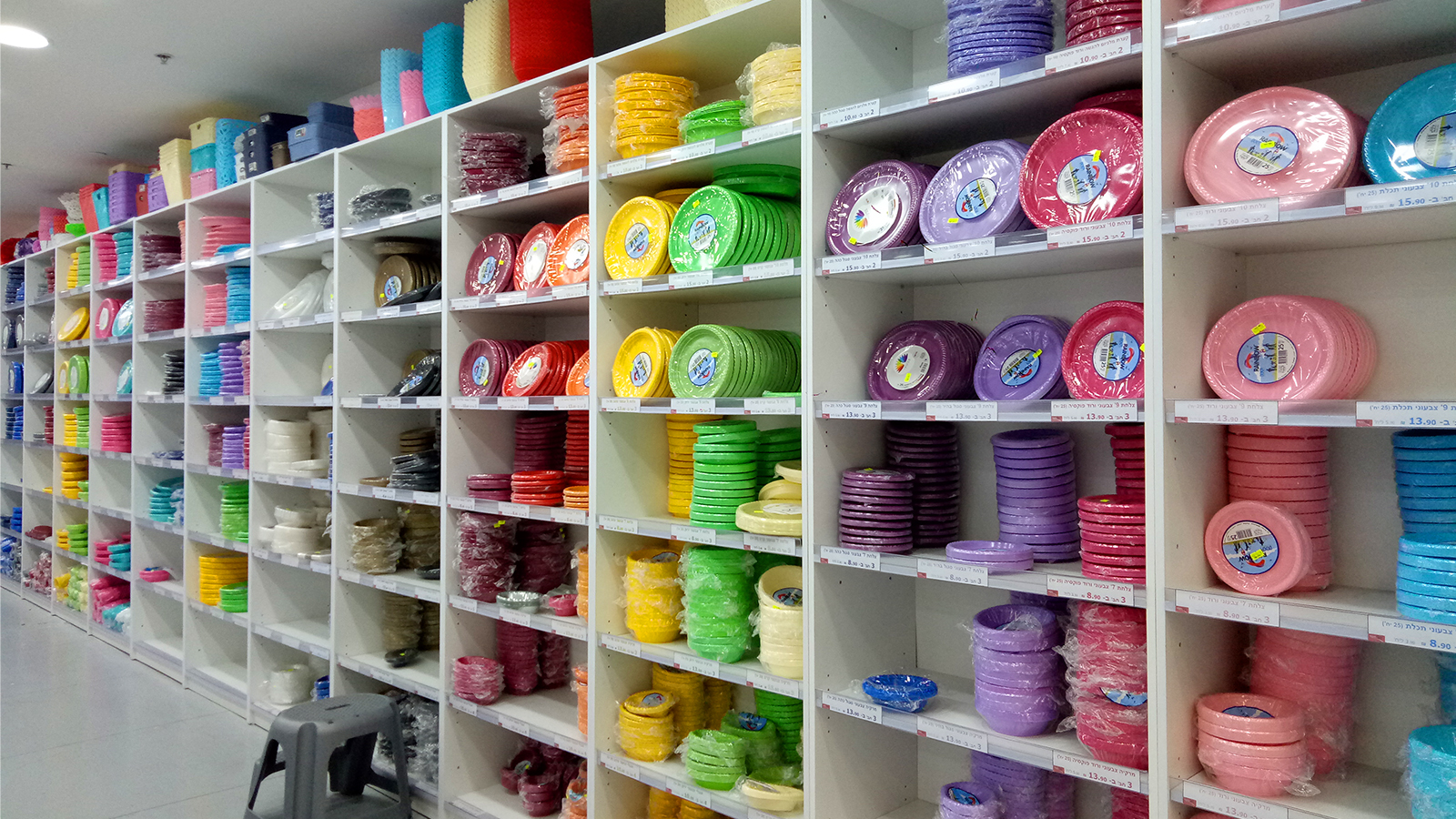 As Israeli society has become more prosperous and Westernized, the popularity of fancy plastic tableware and disposables has grown, especially during holidays when people host many guests. RNS photo by Michele Chabin
September 26, 2018
Paul O'Donnell

JERUSALEM (RNS) – Just hours before the Jewish festival of Sukkot began on Sunday (Sept. 23), the Rami Levy supermarket here was still packed with shoppers with carts brimming with food, holiday decorations and plastic plates and cutlery.

By the time the weeklong holiday – which recalls God’s mercy to the Israelites as they wandered in the desert for 40 years before reaching the Promised Land – ends on Sept. 30, much of that food and most of those disposable goods will wind up in dumpsters.

“Holidays are a time of increased food purchases, increased hosting,” noted Joseph Gitler, CEO of Leket Israel, the country’s national food bank and the leading food rescue organization in Israel. “While we’re thankful to live in a country with abundance and want to be generous to our guests, as a society we need to think more about what we’re wasting financially and environmentally.” 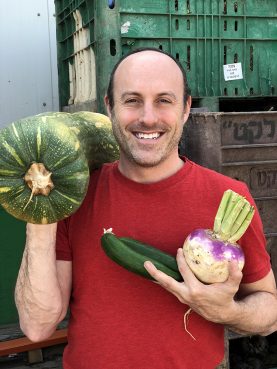 In Israel, holiday waste is multiplied by three, as the Holy Land hosts native Jews, Muslims and Christians as well as the crowds of tourists who come to celebrate throughout the year. Groups such as Gitler’s are beginning to tackle the problem of household food waste, pointing out the social cost of throwing away food and disposable products.

Leket Israel estimates that families will waste 50 tons of fruits and vegetables worth $102 million during the Jewish holiday season that began in early September. In all, about $523 million worth of food purchased at supermarkets will go to waste, the organization said.

In contrast, the amount of industrial food waste has decreased in recent years.

The money households spend on excess food could go to the 22 percent of Israelis who live below the poverty line, Gitler said.

In 2017 Leket rescued 14.3 tons of fruits and vegetables from farmers’ fields and packinghouses, 500 tons of surplus food from the manufacturing sector and 2.2 million cooked meals from catering halls, hotels, company cafeterias, events and military bases.

That haul was distributed to 210 food pantries and other not-for-profits, which in turn provided meals to 175,000 people per week at soup kitchens, homeless shelters, battered women’s shelters and other organizations and institutions for the needy. 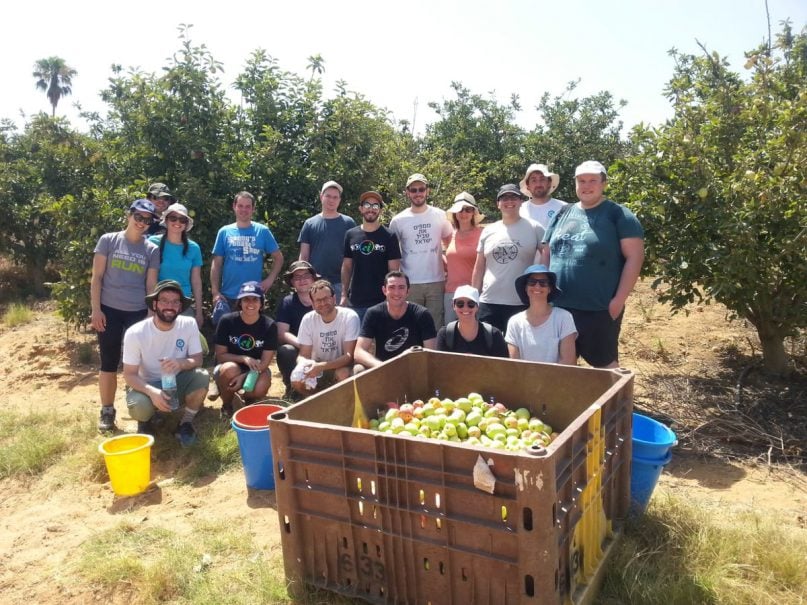 Volunteers from Google pose after harvesting apples for Leket Israel in June. Photo courtesy of @LeketIsrael

Gitler expressed frustration that the Israeli government, which has publicly campaigned for the conservation of water and wildflowers, promoted plastic bottle recycling and instituted fees for disposable plastic supermarket bags, has failed to address the issue of food wasted at home.

“We’re calling on the government to start educating kids in schools,” Gitler said.

The education ministry said its programs about food focus on healthy eating, while the question of food packaging comes up in classes on ecology.

“Schoolchildren learn about the danger of plastic, how it gets into the sea, gets into our drinking water and hurts the environment,” a ministry official said.

Environmentalists say that more needs to be done in a country that uses more plastic cups per capita than any other people in the world, according to Israel Aviav, CEO of WinPac, a consumer products importer, who spoke to the financial newspaper Calculist.

This year’s sales for disposables and plastic tableware in Israel could reach $187 million, up from $124 million in 2014, the newspaper reported. 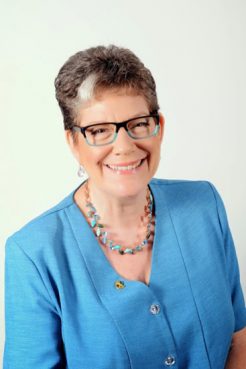 The mania for plastic dinnerware has risen as Israel has become more prosperous and open to Western trends, especially among religious Jews and Muslims, who tend to have large families.

“We’ve adopted the habits of the Western world, especially for public events and sabbaths and festivals,” said Naomi Tsur, founder and head of the Israel Urban Forum.

Every Israeli neighborhood has recycling bins for plastic and glass bottles, but there is no such option for the plastic tableware and disposables that so many families stock up on during the holidays.

While there are nations that fine their citizens if they produce too much waste, and others ban plastic tableware, Israel has no immediate plans to do either, environmentalists say.

“Ultimately, it really comes down to personal and family ethics,” Tsur said. “People say their cities are dirty and that the local authorities should clean them up. But these people don’t have to drop their rubbish in the first place. The same is true of plastic.”

Israel, a nation of 8.5 million people, “is just a pebble in the sea” when it comes to worldwide plastic pollution, Tsur said, “but everyone must do their share. It’s not enough to recycle waste. We have to cut down on its production.”

During this year’s Jewish holidays, members of Kehillat Yedidya, a socially conscious Orthodox synagogue in Jerusalem, began to discuss the possibility of banning bottled drinks and instead using water pitchers and biodegradable plates for synagogue events.

“Yedidya is a congregation based on respect. Respect for others, respect for Jewish law, respect for the environment,” Cheryl Birkner Mack, a synagogue member, said. 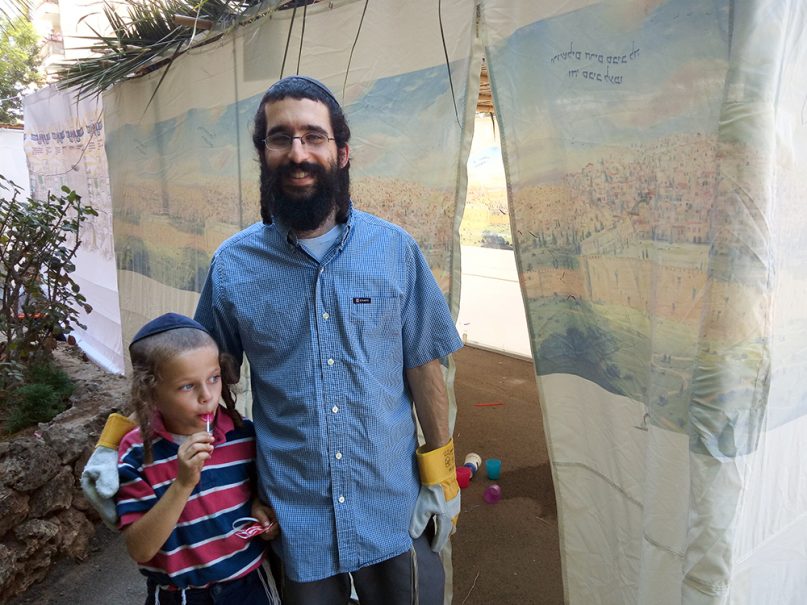 Yehoshua Pittleman, a father of five, with his son Shlomo Yisrael, outside the family's sukkah in Israel. A sukkah is a temporary structure, usually square or rectangular, that Jews build for the holiday of Sukkot. RNS photo by Michele Chabin

In a quiet neighborhood in south Jerusalem, Yehoshua Pittleman, a father of five children ages 8 and under, said his family would be using disposable tableware during the Sukkot holiday. His family lives in a fourth-floor walk-up and planned to eat most of the holiday meals in the family's sukkah – a temporary, usually square or rectangular structure Jews build for the holiday – on the building’s entrance level.

Putting the finishing touches on his square sukkah, which featured a thatchlike roof and four cloth walls imprinted with colorful illustrations of Jerusalem, Pittleman said that “it’s really hard to keep up with all the dishes during the holiday, so we’re using disposables.”

He said the family might come up with a more environmentally sound solution next year.

“I recently read a book emphasizing the principles of reducing waste and reusing materials,” Pittleman said. “We’re going to try for more sustainability in the future.”