(RNS) — For the professional religious right, the nomination of D.C. Circuit Court Judge Brett M. Kavanaugh to the Supreme Court was an ultimate triumph. Abortion rights, which allegedly propelled religious conservatives from the political sidelines to the corridors of power, are on the cusp of being dismantled.

This moment, decades in the making, was supposed to be a joyous victory, the culmination of a decades-long fight.

The judge, whom the president selected from a long list of candidates approved by the conservative Christian legal establishment, was supposed to see his nomination voted out of the Judiciary Committee to the Senate floor this week.

And yet here we are.

On Thursday (Sept. 27), Christine Blasey Ford, a Palo Alto University psychology researcher, testified on national television that Kavanaugh assaulted her at a high school party as a friend of his looked on.

“I was underneath one of them while the two laughed,” she said. “Two friends having a really good time with one another.”

The friend, Mark Judge, wrote on his yearbook page that “Certain women should be struck regularly, like gongs.”

The pair are a fitting personification of the troubled relationship between conservative Christians and Republican politics.

Kavanaugh personifies all the religious right’s political and legal aspirations. They are confident he will help overturn Roe v. Wade. He personally antagonized the Clintons, served in the George W. Bush White House and rose to the top of the conservative Christian legal movement. Like other religious right front men, he dons his Sunday best. But recent events leave some doubt about whether he can quite live up to the cut of his suit. 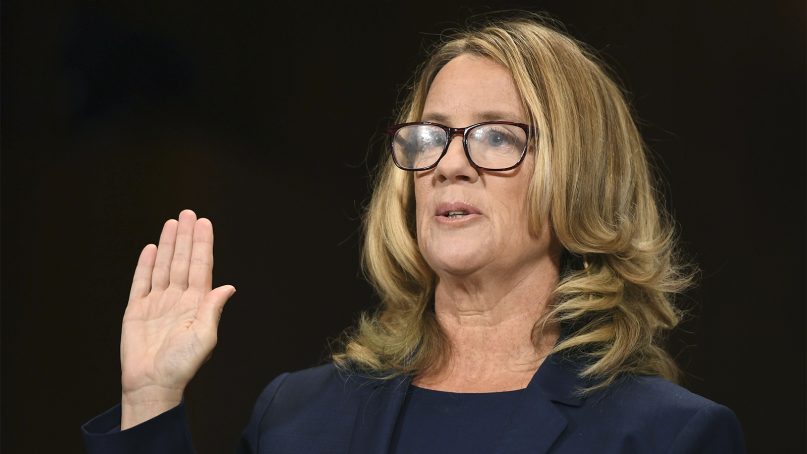 Christine Blasey Ford is sworn in to testify before the Senate Judiciary Committee on Capitol Hill in Washington, on Sept. 27, 2018. (Saul Loeb/Pool Photo via AP)

Still, religious right icons have rallied to his defense.

When busloads of Liberty University students descend on the U.S. Senate to support Kavanaugh (with university president Jerry Falwell and Penny Nance, the latter of a group called — I am not making this up — Concerned Women for America), it is worth asking what else besides integrity was sacrificed along the way to political victory.

The Georgetown Prep and Yale Law drunken-party circuit — abetted by entitlement, wealth and privilege, and institutionalized toxic masculinity — represent the political party that these true believers were drawn into, even though it was going to be an uneasy fit.

It should have been an uneasy fit.

Politically,  white conservative Christians have been invaluable to the country club wing of the Republican Party, which put their zeal to work to end an era of social progress on civil rights, economic equality and fiscal health. The old guard used its newfound clout to enact deficit-financed tax cuts, decimate the labor movement and shift an ever higher percentage of the national income to those at the very top.

Meanwhile, their own principles suffered.

Few white evangelicals or conservative Catholics were put off by the party’s embrace of leaders who demonized Islam, disparaged undocumented immigrants and rolled back voting rights. They helped ensure that the Republicans ended up abandoning morality altogether and nominating for president a vulgar, spiteful man who boasted of his own sexual assaults.

Now it seems that president has nominated a judge who shares the political values of conservative evangelicals but may have violated many of their morals. Drunken parties and sexual assault are the kinds of things that Liberty University — and Concerned Women for America — have abhorred in the past.

But they no longer seem to give these conservative evangelicals pause.

So often when religion and politics mix, religion is sullied. As the evangelicals have risen in prominence, we have heard less and less about the Old, Old Story, and wondered if they even believed it at all.

The country has suffered under this partnership as well.

Since Republicans’ shameful treatment of Obama nominee Merrick Garland in 2016, the legitimacy of the Supreme Court confirmation process is at an all-time low. Under President Trump’s leadership, the presidency’s legitimacy is at a low ebb as well. Kavanaugh’s elevation would erode the Supreme Court’s legitimacy. The country cannot afford it, and Trump would have been wise to nominate someone more easily confirmable than Kavanaugh.

I don’t know Brett Kavanaugh’s heart. I cannot know what he has done at parties or in the confessional or anywhere else. But even if he did everything he stands accused of and more, his sins and crimes would pale in comparison to his patron, Trump, whom Falwell has called “evangelicals’ dream president.” If Kavanaugh’s behavior disqualifies him, how much more is Trump disqualified?

After the Kavanaugh debacle, which was supposed to be the conservative Christian political and legal movement’s crowning moment, I can no longer look at the union between so-called Bible believers and pro-rich politicians as something normal, expected or accepted.

My new framework for understanding the religious right is not my own. It comes from Christine Blasey Ford, the brave soul whose civic duty compelled her to speak out about what actually happened: “Two friends having a really good time with one another.”