CHICAGO (RNS) — The biggest reaction Eric Metaxas got from students this week at Judson University in suburban Elgin was when Judson President Gene Crume introduced him as one of the writers and voices on “VeggieTales,” a popular Christian animated series many millennials grew up watching.

Metaxas, who co-wrote an episode called “Lyle the Kindly Viking” and narrated another on Queen Esther, has had quite an eclectic career.

A well-known talk radio host, he’s written popular biographies of Dietrich Bonhoeffer and Martin Luther. He’s also written books for kids, including “God Made You Special,” featuring Bob the Tomato and Larry the Cucumber of “VeggieTales,” and a forthcoming humor book, “Donald Drains the Swamp,” referring to President Trump, whom he has vocally supported.

“I want to stress to you that I’m very confusing,” he told students, with a smile on his face.

As the anniversary of the signing of the U.S. Constitution passed this month, Metaxas was one of two popular evangelical Christian authors who offered competing views on university campuses in the Chicago area of whether America was founded as a Christian nation.

On Wednesday (Sept. 26), Metaxas was at Judson to talk about his book “If You Can Keep It: The Forgotten Promise of American Liberty” for the school’s annual Constitution Day chapel service.

He shared the anecdote from which the book gets its title. As Benjamin Franklin was leaving Independence Hall after signing the Constitution, he was asked what kind of government they had created, Metaxas said.

“A republic, madam, if you can keep it,” was his reply, according to the author and speaker.

“You’ve got to understand that the Constitution doesn’t keep itself,” he said. “We the people have to understand it and keep it. We have to keep the republic. It’s up to us.” Historian John Fea, left, joins “Things Not Seen” podcast host David Dault for a recording of the show at Seminary Co-op Bookstore on the University of Chicago campus on Sept. 24, 2018. RNS photo by Emily McFarlan Miller

Historian John Fea is skeptical of Metaxas’ views on American history and his support of the current administration.

A couple of days before Metaxas spoke at Judson, Fea was in Chicago to talk about his new book, “Believe Me: The Evangelical Road to Donald Trump,” during a taping of the “Things Not Seen” podcast Monday at the Seminary Co-op Bookstore on the University of Chicago campus.

Though he teaches American history at Messiah College, an evangelical school, he rejects the idea, popularized by evangelical writers such as Metaxas and David Barton, that America was founded as a Christian nation. Countering that claim is a difficult task. But, he said, it’s important for evangelical Christians to see a different view of early American history from a fellow evangelical.

“Because, you know, frankly, Barton and Metaxas especially are much more popular than people like me who are trying to push back,” he said. Fea argues that the Founding Fathers’ view of religion was “much more nuanced and complex than people on the left and the right make it.”

Progressives are tempted to believe the Founding Fathers were all secular, didn’t care about religion or wanted everybody to be free of the matter of religion, he told Religion News Service. On the other hand, conservatives see the country’s foundation as “uniquely Christian.”

In reality, he said, some of the founders were Christians, and some were not. John Adams, Thomas Jefferson and Benjamin Franklin would not have embraced “orthodox Christianity,” Fea said, but they believed that religion could be useful in a republic — that in order for a republic to work, one needed to sacrifice one’s own interests for the greater good.

In writing the First Amendment, they wanted religion — all religion — to flourish. At the time there were few non-Christians in America, he said, but the Founding Fathers’ writings show they always saw it applying to Jews, Muslims, Hindus and people of other faiths and no faith, as well.

Much of Metaxas’ talk Wednesday on his book “If You Can Keep It” centered on a similar idea — that the founders recognized virtue, faith and freedom as essential to keeping the republic.

He made that point by referring to a quote he attributed to President Lincoln, calling Americans God’s “almost chosen people.”

“When God blessed America — and he has blessed us all these years — he didn’t do it to bless us. He did it to bless the whole world through us,” Metaxas said. 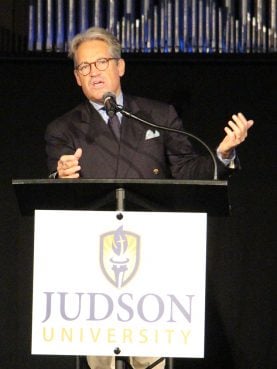 Metaxas, who declined an interview with RNS through Judson, also linked his ideas to current politics, expressing concern that government has been growing larger and “we’ve effectively been losing our freedoms.”

He encouraged each student to do his or her part, whatever that might look like, and explained what it means to “drain the swamp” of corruption and money, a popular talking point of Trump.

The idea of being blessed to be a blessing resonated with a number of Judson students, who filled the 500-seat Herrick Chapel as they do three times a week for services, legs dangling over the side of the chapel’s wooden balcony.

Freshmen Arianna Wink and Madison Psinas said over lunch afterward they hadn’t learned in public school about the role religion may have played in the country’s founding, but they liked what Metaxas had shared about virtue and speaking up for what they believe.

“I haven’t grown up hearing a lot of politics mixed with religion,” said Psinas, who was one of a small group of students who had the opportunity to meet with Metaxas the day before.

“His discussion about compassion, living by example and being able to voice your opinion in this country was something we needed to hear in terms of feeling like we can really express ourselves and our faith.” 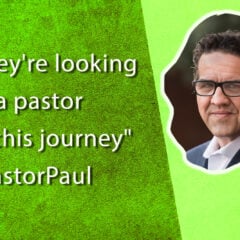