(RNS) — The Brett Kavanaugh crisis has been a crucible for questions about sexual behavior and women’s equality. But Thursday’s drama on Capitol Hill, and evangelical Christians’ responses to it, also reveal much about the racial problem at the heart of white conservative Christian America.

A number of white evangelical pastors publicly insist that the rape allegations by Dr. Christine Blasey Ford and other recent victims are simply “irrelevant” because Kavanaugh was a 17-year-old boy, too young to be held responsible for such actions if they occurred at all.

Franklin Graham, who has said he believes Kavanaugh’s denials of sexual assault, also dismissed the claims against him as political maneuvering.

“It’s just a shame that a person like Judge Kavanaugh, who has a stellar record, that somebody can bring something up that he did when he was a teenager close to 40 years ago. That’s not relevant,” Graham told the Christian Broadcasting Network.

Boys will be boys, as the saying goes.

Many white conservative voices have asked that we give Kavanaugh the benefit of the doubt. By not extending this same courtesy to his multiple accusers, these pastors make clear that they don’t consider combating gender violence a priority in this country or in the churches they lead. Although Ford has testified in front of the Senate Judiciary Committee, this nation has a long way to go in believing women’s voices concerning sexual violence.

Yet Kavanaugh’s case is not just about the inequalities associated with gender and how women are made responsible for violence committed against them. This issue also reveals the fault lines between white conservative Christians and black communities.

The Rev. Al Sharpton, center, speaks at Greater Grace Church in Florissant, Mo., on Aug. 17, 2014, during a rally for justice for Michael Brown, an unarmed teen shot by Darren Wilson, a Ferguson police officer. Photo by Christian Gooden/St. Louis Post-Dispatch

White conservative Christian preachers such as Franklin Graham might pause to wrestle with the uneven racial histories that portray young black boys (and girls) as responsible for a myriad of social problems, even when they are innocent.

In this country, in short, black boys can never simply be “boys.”

Consider 14-year-old Emmett Till, lynched by a vicious white mob over allegations involving sexual assault of a white woman in 1955 in Mississippi. Worse, it took decades for white political leaders to decry his lynching.

There are still Emmett Tills today, who are murdered without due process.

Consider Mike Brown, an unarmed black teen who was fatally shot in the middle of the street for looking (and supposedly behaving) like a “monster” (the words of Officer Darren Wilson).

Consider the life of Botham Jean, gunned down in his own home by Officer Amber Guyer only to be met with rationales that he resisted the commands of an off-duty officer who broke into his house. Even more horrific, his house was searched after the shooting and new rationales for his death emerged, including the argument that he had marijuana in his home and was therefore a threat, inviting his own demise.

Consider Dayonn Davis, a Georgia teen who was tried as an adult for stealing a $100 pair of shoes and received a five-year prison sentence.

White conservative political leaders appear to be equally appalled that they have been “forced” to hold hearings on whether the allegations against Kavanaugh are true. During Lindsey Graham’s meltdown during Thursday’s hearing, the senator stated that “immaturity does not equal criminality.” 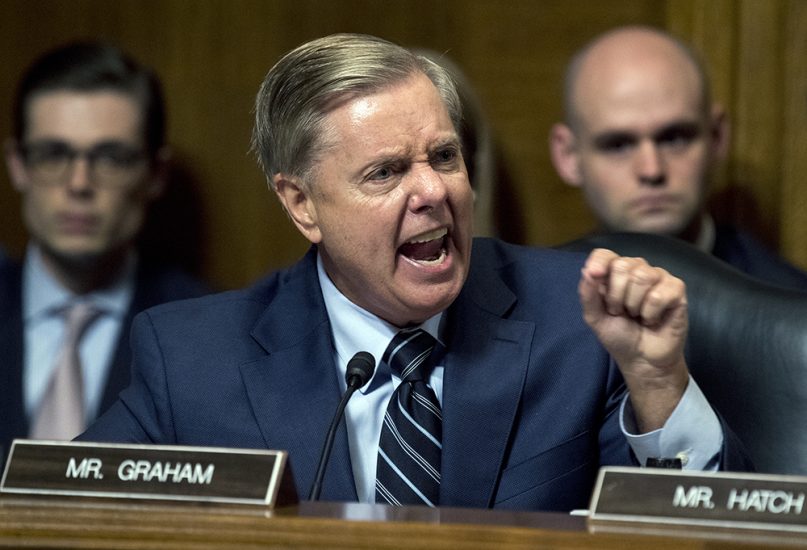 This is a privilege that is not accorded so many black boys and men. What excuses Kavanaugh from being called to account, to determine if indeed his alleged actions caused trauma in the life of a 15-year-old girl? Kavanaugh desires to be chosen for one of the highest positions in our nation. Why shouldn’t a fair and proper investigation be conducted in light of these serious allegations?

The answer is plain: Conservative voices want to give Kavanaugh a pass because he is a white man who will represent their interests.

The kind of sexist and racist logic that pastors such as Franklin Graham espouse is reckless and demonstrates that the racial gap in our country is sadly denied. We cannot heal. We must call out the demons of white privilege that allow white men to be considered innocent from the very start while ethnic groups such as blacks in this country go on trial even after their own blood has unjustly been spilled.

Most importantly, this entire hearing is a symptom of a much deeper problem in our country, in which entire groups of vulnerable and marginalized people stand to be stripped of fundamental rights and liberties.

We should be concerned about what Kavanugh represents: a doubling down of white evangelical Christian America in the face of growing ethnic, gender and religious diversity. With Kavanaugh’s appointment, women stand to be denied access to reproductive justice. Immigrants will continue to feel the weight of white populist anger and state violence. Policies to roll back important health policies will affect the poor. Disadvantaged black communities will experience an ever-growing system of mass incarceration and militarized policing.

As I watched Kavanaugh cry during the hearing, I wondered why his tears were privileged over those of countless vulnerable groups who have been adversely affected under the Trump administration and will continue to be affected by Kavanaugh’s appointment.

Race matters. And an acknowledgment that race matters in Kavanaugh’s case is both an intellectual and spiritual admission that things must change.

(Keri Day is an associate professor of Constructive Theology and African American Religion at Princeton Theological Seminary. The views expressed in this commentary do not necessarily represent those of Religion News Service.)

Spiritual Politics
How much leeway should the Supreme Court give coaches to pray?
Follow us on Facebook!
Submit your photos to RNS