They also may find Tom Cruise.

BibleWalk, a collection of more than 300 wax figures, is perhaps best known for resurrecting used celebrity wax figures as characters from the Bible, including “King Solomon John Travolta” and “Tom Cruise Jesus,” according to RoadTrippers.com.

But there’s more to BibleWalk than just a roadside attraction.

It’s a self-described “labor of love” for the volunteers from Diamond Hill Cathedral who built BibleWalk and operate it on church grounds. Those volunteers lead tours, create costumes for each figure, paint wall murals and record music and narration for each of the 80 or so biblical scenes at the museum. 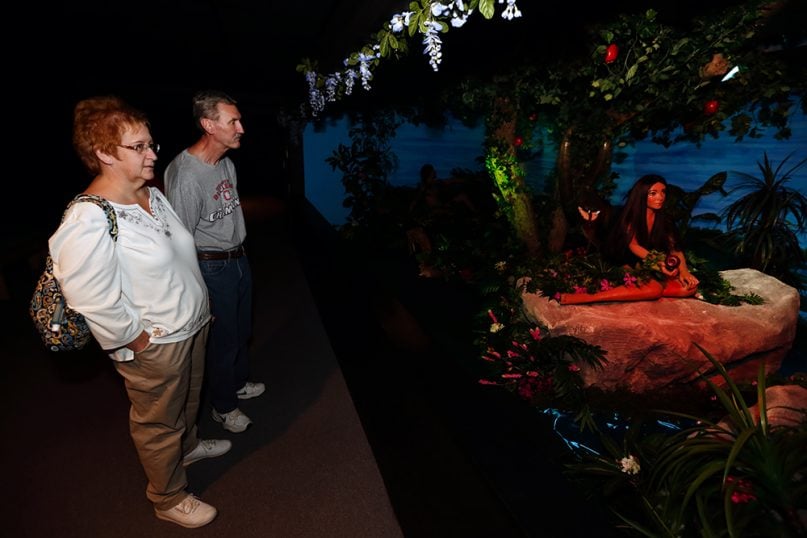 Ann Nelson and her husband Tim, of Hilliard, Ohio, view the Adam and Eve display during a tour at BibleWalk, in Mansfield, Ohio, on Sept. 28, 2018. RNS photo by Paul Vernon

“More than an attraction, it is a ministry,” said Julie Mott-Hardin, director of BibleWalk.

The idea for BibleWalk came to Diamond Hill Cathedral Pastor Richard Diamond and his late wife, Alwilda, in the early 1970s while attending a crusade in Atlanta, Ga. While there, they toured what the BibleWalk’s souvenir booklet described as a historical museum that ended with a scene portraying Jesus ascending into heaven as described in the Gospels.

That tour gave Diamond an idea.

“Honey,” he told his wife, according to the booklet, “wouldn’t it be great if one day we could build a Bible museum?”

The Living Bible Museum opened in 1987.  Now known as BibleWalk, it has several guided tours of its figures spanning three buildings, including the hour-long Miracles of the Old Testament and Life of Christ, as well as the Heart of the Reformation, the Museum of Christian Martyrs and Amazing Grace — The Journeys of Paul, each a half-hour long. A sixth — Kingdom of God — is scheduled to open in summer 2019 and will depict Jesus’ teachings and parables.

There’s also a “Dinner with Grace,” a Bible-themed dinner theater on the grounds.

Many of BibleWalk’s wax figures come from closed wax museums across the country or were bought from wax figure manufacturers that had a surplus, usually at discounted prices. A variety of the versions of Jesus used at BibleWalk. RNS photos by Paul Vernon

Organizers found wax figures of reformers like Martin Luther at Potter’s Wax Museum in Florida, the first wax museum in America, according to Mott-Hardin. The Last Supper on display in the Life of Christ came from Madame Tussaud’s, she said.

Yes, some are celebrity figures, according to the director.

The museum got a boost of publicity in 2015 when the Daily Mail ran an article identifying a wax Prince Philip being resurrected in a scene of the Last Judgment. Mott-Hardin recalled hearing Jimmy Fallon joke about it on late-night television.

People are correct about some of the wax celebrities they claim to have spotted at BibleWalk and wrong about others, she said. Some the museum doesn’t even own.

Mott-Hardin describes herself as “one of the original hippies” who became a Christian in 1971 at Diamond’s first church, Faith Revivals. She said she’s turned down requests to take people on tours of the museum’s born-again celebrities.

But she doesn’t care what gets people in the door at BibleWalk. 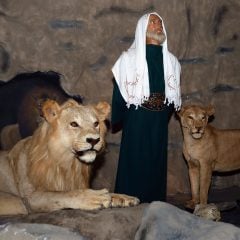 The Daniel in the Lions Den display, which features taxidermied lions, at BibleWalk in Mansfield, Ohio, on Sept. 28, 2018. RNS photo by Paul Vernon 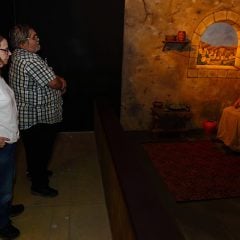 Kathy and John Timmons, of Cadiz, Ohio, look at a display in the Amazing Grace-The Journeys of Paul tour featuring Saul’s conversion to Paul at BibleWalk in Mansfield, Ohio, on Sept. 28, 2018. RNS photo by Paul Vernon 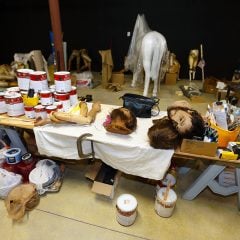 Wax figure heads wait to be installed in a new exhibit at BibleWalk on Sept. 28, 2018. RNS photo by Paul Vernon 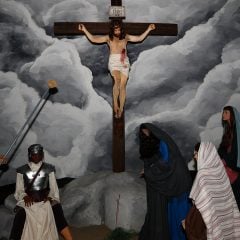 The Crucifixion scene at BibleWalk in Mansfield, Ohio. RNS photo by Paul Vernon Moses and the Ten Commandments display at BibleWalk on Sept. 28, 2018. RNS photo by Paul Vernon 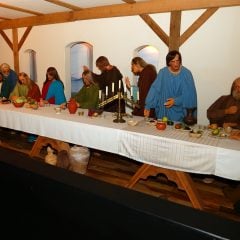 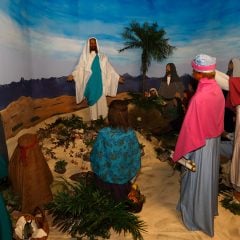 The Sermon on the Mount display at Biblewalk in Mansfield, Ohio, on Sept. 28, 2018. RNS photo by Paul Vernon 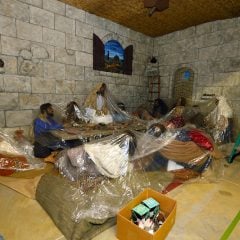 The new exhibit Seek Ye First The Kingdom of God is seen under construction at BibleWalk on Sept. 28, 2018. RNS photo by Paul Vernon 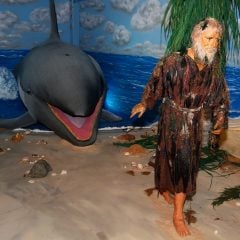 The Jonah display at BibleWalk in Mansfield, Ohio, on Sept. 28, 2018. RNS photo by Paul Vernon

Once they’re inside, she said, she’s seen people moved to tears by the experience of seeing the Bible scenes on display. She and the volunteers who lead tours at the museum are quick to ask if anyone needs to talk or needs prayer or simply a hug.

“Deep down, we believe that God sends each person here, so I want to make sure — as much as it’s in me — that they’re getting out of their experience here everything that God wanted them to get,” she said.

On a sunny Sunday afternoon in late September, about 40 visitors toured BibleWalk.

As a group of four adults walked through the Life of Christ, they whispered in recognition as a robed tour guide illuminated each scene with the push of a button.

Lightning flashed across the backdrop in the scene depicting Jesus’ crucifixion. Jairus’ daughter’s chest rose and fell as Jesus commanded the dead girl to get up. Children dressed to represent “all races, creeds and nationalities” surrounded Jesus in one of the few scenes that has remained relatively unchanged since the wax museum opened more than three decades ago.

There are a number of religious roadside attractions like BibleWalk, according to Timothy Beal, chair of the Department of Religious Studies at Case Western Reserve University and author of “Roadside Religion: In Search of the Sacred, the Strange, and the Substance of Faith.”

They were popularized in the 19th century, when a reproduction of Jerusalem covered 13 acres at the World’s Fair in St. Louis and many churches laid out similar reproductions on their properties, Beal said.

“There was this real focus on educating Christians to know that geography — to know the story and to know where it took place,” he said. 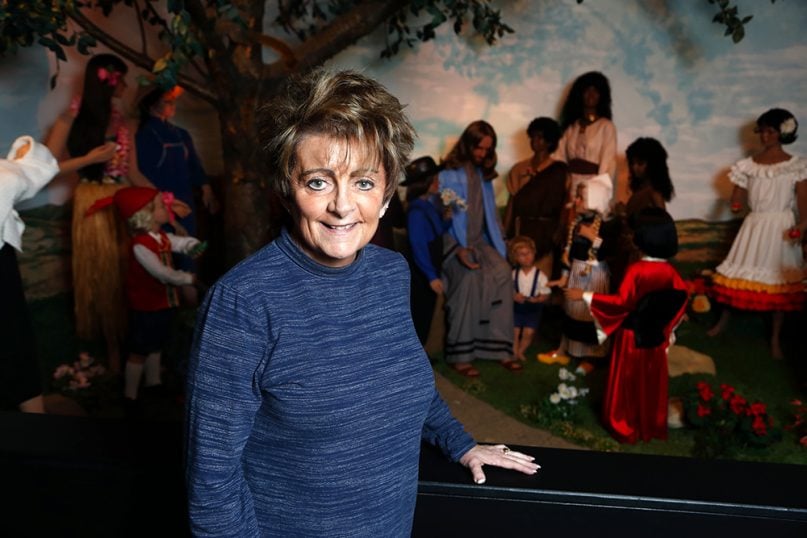 BibleWalk director Julie Mott-Hardin in front of the Jesus and the Children display at the religious wax museum in Mansfield, Ohio, on Sept. 28, 2018. This display is made of museum quality fiberglass and is one of two scenes that have remain unchanged since 1987. RNS photo by Paul Vernon

Before Beal visited the first such site for his research, the now-shuttered Holy Land USA in Bedford County, Va., he thought it might be hard to keep a straight face. But he quickly learned to take them seriously.

He was struck by the sincere beliefs of the people who run the sites, he said.

“Even if it’s kind of corny- and kitschy-seeming from a distance, you’re aware of being a guest and that this person is not only hosting you in this space, but they’re kind of letting you into their own personal religious experience and lives,” he said.

It also was moving for many of the guests he encountered at those sites.

That was Paula Baker’s experience when she visited BibleWalk from North Ridgeville, Ohio, with a friend after a non-Christian co-worker was impressed by his visit weeks before.

Baker, who is Catholic, walked through the tour about the life of Paul, an early Jewish follower of Jesus who wrote many of the letters in the New Testament and whose story is recorded in the biblical book of Acts. She’s read those stories and letters countless times, she said.

“But to see it — it feels like you’re right there. It puts you in the moment,” she said. The Ascension display at BibleWalk in Mansfield, Ohio, on Sept. 28, 2018. RNS photo by Paul Vernon

Latter-Day Saints
What do Mormons do with the Book of Revelation?
News
Mexican-born bishop chosen to soon lead the Diocese of San Bernardino
News
At Bishop Barber’s NC church, Pete Buttigieg works to woo black voters
Faith
Chief rabbi’s attack on anti-Semitism keys reckoning over faith in UK election
Faith
The priest who channeled Black Power into the Catholic Church
© Copyright 2020, Religion News Service. All rights reserved. Use of and/or registration on any portion of this site constitutes acceptance of our User Agreement and Privacy Policy, Privacy Statement and Cookie Notice. The material on this site may not be reproduced, distributed, transmitted, cached or otherwise used, except with the prior written permission of Religion News Service.