It was an exciting General Conference for the Church of Jesus Christ of Latter-day Saints this weekend, with several major announcements as well as undercurrents of larger themes. Here are nine highlights.

In the Sunday morning session, President Russell M. Nelson hammered hard on the name of the Church, urging members to stop using the nickname “Mormon” and stating the reason behind the recent campaign to use the full name of the Church.

It’s not a rebranding effort, he emphasized, nor is it a trivial matter. It’s the Lord’s will that the entire name be used, since it places focus on Jesus Christ. Nelson stated that “if we allow nicknames to be used and adopt or even sponsor those nicknames ourselves, he [the Lord] is offended.”

Nelson also noted that “responsible” members of the media would be quick to honor his request about the change. For my part, I should note that RNS has no immediate plans to deviate from the Associated Press stylebook we follow, which stipulates that the full name of any religious institution be used upon first reference, followed by shortened references thereafter (“the Roman Catholic Church” on first reference can be followed by “Catholic,” or “the African Methodist Episcopal Church” by “AME”). Here is the Religion News Association’s supplement to the AP stylebook regarding Mormonism. If the AP style should change I will be sure to blog about it and let you know.

What’s particularly interesting about Nelson’s focus on the name of the Church is that it was the Church itself that, beginning around 2010, that began a full-court-press rally around that very word “Mormon.” In endeavors like the successful “I’m a Mormon” ad campaign and the Meet the Mormons movie, the Church introduced a curious public to individual Mormon people, showcasing their faith and their contributions to the world.

Now President Nelson is not only moving in a different direction but saying that the old direction may have been a “major victory for Satan.” That’s a 180-degree turn the likes of which is almost unheard of in modern Mormonism, where change happens glacially and current church leaders simply don’t overturn the legacy of deceased ones.

What usually happens is that a teaching is de-emphasized while a new one gains momentum to take its place, but the old one is still “on the books,” sometimes for decades. For example, the manual for adults who are preparing for eternal marriage contains a 1976 quote from Spencer W. Kimball that discourages interracial marriage—a prohibition that has not been taught at the pulpit in Conference for decades. The quote seems to have been removed from the online version of the lesson, thank heavens, though it is still in the print version on page 169. I’m sure the print version will be updated next. This kind of quiet, unheralded updating is typical of the slow-moving LDS Church.

Nelson is doing something altogether different and decisive. He seems unafraid to say that the previous way of doing things was wrong—and it should be remembered that he would have been part of the decision making on the use of “Mormon” personally, as he’s been a member of the Quorum of the Twelve since the Reagan administration. He’s rebuking himself too here.

This raises the question: if a Mormon president is unafraid to boldly (and publicly) challenge a policy of previous church leaders, what other changes may be coming?

LDS Church members around the world whooped for joy on social media at the unexpected-but-expected announcement that Sunday meetings would be shortened to two hours from three, which is the schedule that’s been in place worldwide since 1980.

Elder Quentin Cook got to announce the news, and I can imagine that the jubilant reaction where I was watching Conference with friends was echoed in many other places throughout the Church. Also, I got to eat cake. You may remember that my skepticism about two-hour church was so entrenched that I promised to eat my hat — or at least a hat-shaped cake — if I was wrong. Glad to be wrong. The cake was delicious. 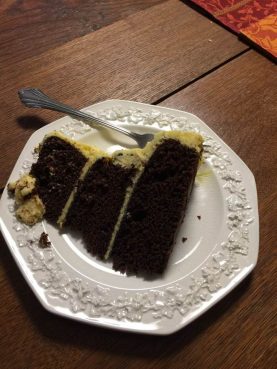 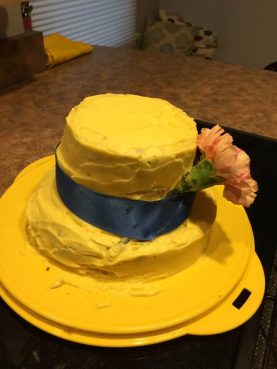 The cake tasted way better than it looked, by the way. Photo by Jana Riess

In all of the Twitter reactions I was monitoring, I didn’t see any that were negative, though many wondered how the change, which will be implemented in January, will affect Sunday meetings. Here’s an infographic the Church has provided:

The new meeting schedule for the Church of Jesus Christ of Latter-day Saints, which will begin in January 2019.

Cut from the new schedule: Primary “sharing time” (the 50 minutes of Primary will now be divided between singing time and class time), Gospel Principles classes for new members and investigators, and first Sunday “council meetings” in Relief Society and priesthood.

Several speakers seemed keen to reiterate that having one less hour of church on Sunday does not mean that Mormons get to simply hang out and chillax. Rather, they are to take the initiative in their families to study the gospel at home, aided by a new “Come, Follow Me” curriculum that will be given to all adult members by the end of the year. For next year, the focus will be on the New Testament.

The door also seems open for gospel study groups that aren’t just restricted to family, which would be a change. In the 1990s, Mormon leaders discouraged the formation of such groups, but given the growing number of single members and nontraditional families, they would fill a real need in terms of fellowship and spiritual growth.

Many observers noticed that only one woman, President Bonnie Cordon of the Young Women, addressed the entire mixed audience over the course of the weekend. This is in contrast to 26 talks given by male leaders during the daytime general sessions. 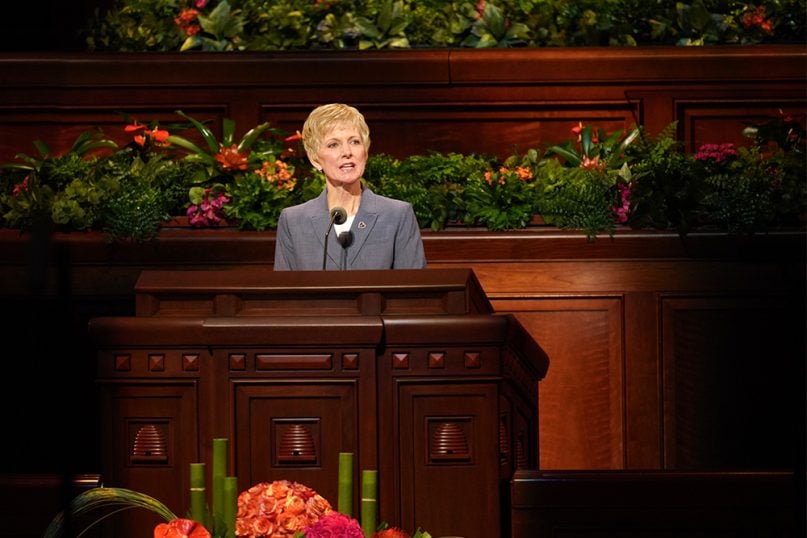 In the Saturday evening women’s session—included as a session of General Conference during Conference weekend for the first time—three women spoke, and three men. I believe it is the first time that all three members of the First Presidency have spoken in the women’s meeting, which some conservative Mormons would see as an honor for women and some liberal Mormons would view as a hostile takeover of what used to be primarily female space.

It didn’t help matters that the male leaders’ talks were very much about defining for women what their roles should be—marriage and motherhood being paramount—while the women’s talks were more far-reaching, focusing on women’s spiritual development and the many ways they can serve others.

Pres. Dallin Oaks’s Saturday talk proved controversial in its firm denunciation of same-sex marriage, a topic avoided by most other speakers. “Under the great plan of our loving Creator, the mission of His restored church is to help the children of God achieve the supernal blessing of exaltation in the celestial kingdom, which can only be attained through an eternal marriage between a man and a woman,” he said.

Oaks, who as the most senior apostle is next in line to be the LDS prophet, also reiterated the teaching in the 1995 document “The Family: A Proclamation to the World” that gender is an eternal characteristic of human beings. He warned that no society should “make changes that confuse or alter gender or homogenize the differences between men and women.” He indicated that opposition to the teaching that gender is eternal and unchangeable is Satanically generated.

Interestingly, in his point about how church members need to oppose abortion and uphold the sanctity of life, he also mentioned opposing euthanasia. The Church has an official policy opposing euthanasia and physician-assisted suicide (see here), but it’s not something you often hear mentioned in General Conference.

On Sunday, Elder M. Russell Ballard gave what many considered to be the most emotionally heartfelt talk of the conference, focusing on the redeeming work that Mormons do for the dead in temples.

It was personal and poignant for two reasons. First, Elder Ballard’s wife Barbara died just days ago at age 86, and he shared anecdotes and photos from their life together. The couple married in 1951 and had seven children. In his talk, Elder Ballard testified of his belief in eternal families, and his abiding love for his wife.

Second, it’s been almost exactly 100 years since the October 1918 revelation received by President Joseph F. Smith about how the dead will be redeemed through temple ordinances (a teaching that is canonized in Mormon scripture as D&C 138). Joseph F. knew about the loss of loved ones, having lost his father, the founding prophet’s brother Hyrum Smith, to assassination when he was a young child. And loss stalked Joseph F. as an adult as well, as he lost thirteen children (“O that I could have saved her,” he wrote after the death of his first child), two wives, and several siblings. The October 1918 revelation also occurred as World War I and the Spanish influenza had claimed millions of lives.

Joseph F. was Elder Ballard’s great-grandfather, linking the chain of church history in a tangible way to contemporary Saints.

Although details are unclear, President Nelson called for the women of the Church to abstain from social media for 10 days to refocus their priorities on the Savior. He also asked them to read the Book of Mormon before the end of 2018, attend the temple regularly, and to be part of Relief Society.

The social media fast is similar to (but longer than) a charge given to the youth of the Church earlier this year.

Finally, Saturday conference talks from new apostles Ulisses Soares and Gerrit W. Gong gave church members a chance to get to know these leaders, who were ordained to the Quorum of the Twelve in April.

Elder Soares drew on a metaphor of rivers in his native South America blending together and becoming powerful to encourage Latter-day Saints who were born into the church to welcome new converts and allow their strength to make them mighty. And in my favorite talk of the conference, Elder Gong called upon members to stretch their creativity in engaging a life of faith.